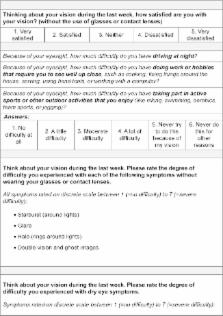 The aim of this study was to assess visual and refractive outcomes of laser vision correction (LVC) to correct residual refraction after multifocal intraocular lens (IOL) implantation.

In this retrospective study, 782 eyes that underwent LVC to correct unintended ametropia after multifocal IOL implantation were evaluated. Of all multifocal lenses implanted during primary procedure, 98.7% were refractive and 1.3% had a diffractive design. All eyes were treated with VISX STAR S4 IR excimer laser using a convectional ablation profile. Refractive outcomes, visual acuities, patient satisfaction, and quality of life were evaluated at the last available visit.

LVC in pseudophakic patients with multifocal IOL was safe, effective, and predictable in a large cohort of patients.

N E Sverker Norrby (2008)
To identify and quantify sources of error in the refractive outcome of cataract surgery. AMO Groningen BV, Groningen, The Netherlands. Means and standard deviations (SDs) of parameters that influence refractive outcomes were taken or derived from the published literature to the extent available. To evaluate their influence on refraction, thick-lens ray tracing that allowed for asphericity was used. The numerical partial derivative of each parameter with respect to spectacle refraction was calculated. The product of the partial derivative and the SD for a parameter equates to its SD, expressed as spectacle diopters, which squared is the variance. The error contribution of a parameter is its variance relative to the sum of the variances of all parameters. Preoperative estimation of postoperative intraocular lens (IOL) position, postoperative refraction determination, and preoperative axial length (AL) measurement were the largest contributors of error (35%, 27%, and 17%, respectively), with a mean absolute error (MAE) of 0.6 diopter (D) for an eye of average dimensions. Pupil size variation in the population accounted for 8% of the error, and variability in IOL power, 1%. Improvement in refractive outcome requires better methods for predicting the postoperative IOL position. Measuring AL by partial coherence interferometry may be of benefit. Autorefraction increases precision in outcome measurement. Reducing these 3 major error sources with means available today reduces the MAE to 0.4 D. Using IOLs that compensate for the spherical aberration of the cornea would eliminate the influence of pupil size. Further improvement would require measuring the asphericity of the anterior surface and radius of the posterior surface of the cornea.

Kerry Solomon,  Luis E Fernández de Castro,  Helga Sandoval … (2009)
To analyze the patient reported outcome of satisfaction after LASIK surgery. Systematic review. Patient data from previously reported studies. A literature search conducted for the years 1988 to 2008 that included pertinent LASIK surgery information from the review of 2915 retrieved citations. All abstracts from these citations were reviewed and 1581 were deemed to be relevant for review. Complete copies of each of these relevant (1581) articles were obtained, and after thorough analysis each was rated based on the strength of the study design and weight of evidence. A level I rating was assigned to properly conducted, well-designed, randomized clinical trials; a level II rating to well-designed cohort and case-control studies; and a level III rating to case series, case reports, and poorly designed prospective and retrospective studies. Level I and II rated, peer-reviewed articles were entered into a database, and level III articles were eliminated. A total of 309 articles were incorporated into this database, representing level I and level II well-controlled studies of primary LASIK surgery. Patients' satisfaction rates and factors associated with dissatisfaction. Nineteen of the 309 database articles (6.1%) reported on both patient quality of life and satisfaction and together encompassed a total of 2198 subjects. The procedures from these 19 articles took place between 1995 and 2003. The overall patient satisfaction rate after primary LASIK surgery was 95.4% (2097 of 2198 subjects; range of patient satisfaction for the 19 articles was 87.2%-100%). The patient satisfaction rate after myopic LASIK was 95.3% (1811 of 1901 patients), and after hyperopic LASIK was 96.3% (286 of 297 subjects). Based on this review, worldwide, an average 95.4% of patients were satisfied with their outcome after LASIK surgery. With 16.3 million procedures performed worldwide, and more than a decade of clinical studies and technological innovation, LASIK surgery should be considered among the most successful elective procedures. LASIK surgery compares more favorably with other elective surgical procedures in terms of generally higher satisfaction rates.