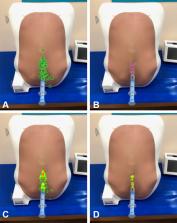 Eye tracking is the process of measuring an individual’s eye movements to register their attentional behavior by using a device called an eye-tracker. Studies conducted using eye-tracking techniques have demonstrated a number of differences in eye movement parameters and patterns between experts and novices. The aim of this preliminary study was to evaluate if there are any differences in eye-tracking metrics between novice and expert anesthesiologists during the performance of an epidural block using an epidural simulator.

Seven experts and seven novices who gave their consent to this preliminary study were asked to perform an epidural technique using an epidural simulator while wearing a pair of Tobii Pro glasses. Number of fixations, fixation duration, heat maps and scan-paths were examined by Tobii Pro Lab Software. Duration of the procedure was also recorded.

The observation of the attentional heat map and gaze plot showed different gaze dispersion between experts and novices. The mean total duration of fixations during needle insertion and advancement and catheter introduction was lower in experts than trainees (respectively, 0.18 vs 3.56 sec; P<0.05 and 0.73 vs 2.48 sec; P<0.05). The mean fixation count was greater in experts vs trainees (5 vs 2; P<0.05). The mean duration of the epidural procedure was 104.16 (41) (trainees) vs 65.3 (32.6) seconds (experts) (P<0.05). Expert anesthesiologists spent more time fixating a more specific target location (eg, the point of the epidural needle rather than the syringe’s barrel) whilst novices split their attention between tracking their tools and the target location.

Eye tracking may have interesting implications for the creation of assessment programs, which distinguish skill level through the use of gaze behavior, and may be a promising tool for monitoring training progress towards the development of expertise.

Expertise Differences in the Comprehension of Visualizations: a Meta-Analysis of Eye-Tracking Research in Professional Domains

Mark A Wilson,  John McGrath,  Samuel Vine … (2010)
Background Surgical simulation is increasingly used to facilitate the adoption of technical skills during surgical training. This study sought to determine if gaze control parameters could differentiate between the visual control of experienced and novice operators performing an eye-hand coordination task on a virtual reality laparoscopic surgical simulator (LAP Mentor™). Typically adopted hand movement metrics reflect only one half of the eye-hand coordination relationship; therefore, little is known about how hand movements are guided and controlled by vision. Methods A total of 14 right-handed surgeons were categorised as being either experienced (having led more than 70 laparoscopic procedures) or novice (having performed fewer than 10 procedures) operators. The eight experienced and six novice surgeons completed the eye-hand coordination task from the LAP Mentor basic skills package while wearing a gaze registration system. A variety of performance, movement, and gaze parameters were recorded and compared between groups. Results The experienced surgeons completed the task significantly more quickly than the novices, but only the economy of movement of the left tool differentiated skill level from the LAP Mentor parameters. Gaze analyses revealed that experienced surgeons spent significantly more time fixating the target locations than novices, who split their time between focusing on the targets and tracking the tools. Conclusion The findings of the study provide support for the utility of assessing strategic gaze behaviour to better understand the way in which surgeons utilise visual information to plan and control tool movements in a virtual reality laparoscopic environment. It is hoped that by better understanding the limitations of the psychomotor system, effective gaze training programs may be developed.

Eye tracking for skills assessment and training: a systematic review.

Ara Darzi,  Tony Tien,  Philip Pucher … (2014)
The development of quantitative objective tools is critical to the assessment of surgeon skill. Eye tracking is a novel tool, which has been proposed may provide suitable metrics for this task. The aim of this study was to review current evidence for the use of eye tracking in training and assessment.

This research did not receive any specific grant from funding agencies in the public, commercial, or not-for-profit sectors.