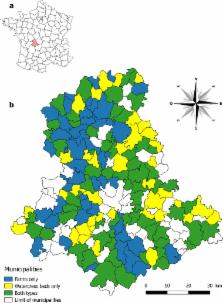 A retrospective study on the natural infection of Galba truncatula by Fasciola hepatica was carried out in the French department of Haute-Vienne to determine whether there are areas at risk for fasciolosis. Adult snails included in this analysis came from samples collected from pastures on 259 farms and from 121 wild watercress beds between 1970 and 2006. Fasciola hepatica infection rates were examined in relation to altitude and climatic data (mean annual rainfall, mean annual temperature) of each municipality. In a total of 108,481 snails collected in 151 municipalities, the overall prevalence of infection was 3.8% but varied according to the municipalities from which samples were taken (from 1% to 7.4%). The prevalence of F. hepatica infection in snails significantly decreased when the mean altitude of municipalities or their mean annual rainfall increased. However, this prevalence significantly increased with increasing mean annual temperatures. Studying the prevalence of infection in these snails makes it possible to delineate zones at risk for fasciolosis on the acid soils of Haute-Vienne. The risk of infection for livestock would be greater in areas of Haute-Vienne below 400 m above sea level and would gradually decrease when the altitude of the land increases.

Climate change effects on trematodiases, with emphasis on zoonotic fascioliasis and schistosomiasis.

Santiago Mas-Coma,  María Valero,  María Bargues (2009)
The capacity of climatic conditions to modulate the extent and intensity of parasitism is well known since long ago. Concerning helminths, among the numerous environmental modifications giving rise to changes in infections, climate variables appear as those showing a greater influence, so that climate change may be expected to have an important impact on the diseases they cause. However, the confirmation of the impact of climate change on helminthiases has been reached very recently. Only shortly before, helminthiases were still noted as infectious diseases scarcely affected by climate change, when compared to diseases caused by microorganisms in general (viruses, bacteriae, protozoans). The aim of the present paper is to review the impact of climate change on helminthiases transmitted by snails, invertebrates which are pronouncedly affected by meteorological factors, by focusing on trematodiases. First, the knowledge on the effects of climate change on trematodiases in general is reviewed, including aspects such as influence of temperature on cercarial output, cercarial production variability in trematode species, influences of magnitude of cercarial production and snail host size, cercarial quality, duration of cercarial production increase and host mortality, influence of latitude, and global-warming-induced impact of trematodes. Secondly, important zoonotic diseases such as fascioliasis, schistosomiasis and cercarial dermatitis are analysed from the point of view of their relationships with meteorological factors. Emphasis is given to data which indicate that climate change influences the characteristics of these trematodiases in concrete areas where these diseases are emerging in recent years. The present review shows that trematodes, similarly as other helminths presenting larval stages living freely in the environment and/or larval stages parasitic in invertebrates easily affected by climate change as arthropods and molluscs as intermediate hosts, may be largely more susceptible to climate change impact than those helminths in whose life cycle such phases are absent or reduced to a minimum. Although helminths also appear to be affected by climate change, their main difference with microparasites lies on the usually longer life cycles of helminths, with longer generation times, slower population growth rates and longer time period needed for the response in the definitive host to become evident. Consequently, after a pronounced climate change in a local area, modifications in helminth populations need more time to be obvious or detectable than modifications in microparasite populations. Similarly, the relation of changes in a helminthiasis with climatic factor changes, as extreme events elapsed relatively long time ago, may be overlooked if not concretely searched for. All indicates that this phenomenon has been the reason for previous analyses to conclude that helminthiases do not constitute priority targets in climate change impact studies.