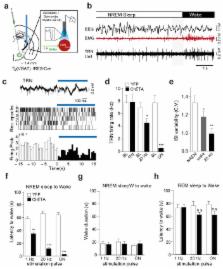 C Peyron,  H. Craig Heller,  Thomas Kilduff … (1998)
The novel neuropeptides called hypocretins (orexins) have recently been identified as being localized exclusively in cell bodies in a subregion of the tuberal part of the hypothalamus. The structure of the hypocretins, their accumulation in vesicles of axon terminals, and their excitatory effect on cultured hypothalamic neurons suggest that the hypocretins function in intercellular communication. To characterize these peptides further and to help understand what physiological functions they may serve, we undertook an immunohistochemical study to examine the distribution of preprohypocretin-immunoreactive neurons and fibers in the rat brain. Preprohypocretin-positive neurons were found in the perifornical nucleus and in the dorsal and lateral hypothalamic areas. These cells were distinct from those that express melanin-concentrating hormone. Although they represent a restricted group of cells, their projections were widely distributed in the brain. We observed labeled fibers throughout the hypothalamus. The densest extrahypothalamic projection was found in the locus coeruleus. Fibers were also seen in the septal nuclei, the bed nucleus of the stria terminalis, the paraventricular and reuniens nuclei of the thalamus, the zona incerta, the subthalamic nucleus, the central gray, the substantia nigra, the raphe nuclei, the parabrachial area, the medullary reticular formation, and the nucleus of the solitary tract. Less prominent projections were found in cortical regions, central and anterior amygdaloid nuclei, and the olfactory bulb. These results suggest that hypocretins are likely to have a role in physiological functions in addition to food intake such as regulation of blood pressure, the neuroendocrine system, body temperature, and the sleep-waking cycle.

F Amzica,  M Steriade,  Desmond A Nunez (1993)
We describe a novel slow oscillation in intracellular recordings from cortical association areas 5 and 7, motor areas 4 and 6, and visual areas 17 and 18 of cats under various anesthetics. The recorded neurons (n = 254) were antidromically and orthodromically identified as corticothalamic or callosal elements receiving projections from appropriate thalamic nuclei as well as from homotopic foci in the contralateral cortex. Two major types of cells were recorded: regular-spiking (mainly slow-adapting, but also fast-adapting) neurons and intrinsically bursting cells. A group of slowly oscillating neurons (n = 21) were intracellularly stained and found to be pyramidal-shaped cells in layers III-VI, with luxuriant basal dendritic arbors. The slow rhythm appeared in 88% of recorded neurons. It consisted of slow depolarizing envelopes (lasting for 0.8-1.5 sec) with superimposed full action potentials or presumed dendritic spikes, followed by long-lasting hyperpolarizations. Such sequences recurred rhythmically at less than 1 Hz, with a prevailing oscillation between 0.3 and 0.4 Hz in 67% of urethane-anesthetized animals. While in most neurons (approximately 70%) the repetitive spikes superimposed on the slow depolarization were completely blocked by slight DC hyperpolarization, 30% of cells were found to display relatively small (3-12 mV), rapid, all-or-none potentials after obliteration of full action potentials. These fast spikes were suppressed in an all-or-none fashion at Vm more negative than -90 mV. The depolarizing envelope of the slow rhythm was reduced or suppressed at a Vm of -90 to -100 mV and its duration was greatly reduced by administration of the NMDA blocker ketamine. In keeping with this action, most (56%) neurons recorded in animals under ketamine and nitrous oxide or ketamine and xylazine anesthesia displayed the slow oscillation at higher frequencies (0.6-1 Hz) than under urethane anesthesia (0.3-0.4 Hz). In 18% of the oscillating cells, the slow rhythm mainly consisted of repetitive (15-30 Hz), relatively short-lasting (15-25 msec) IPSPs that could be revealed by bringing the Vm at more positive values than -70 mV. The long-lasting (approximately 1 sec) hyperpolarizing phase of the slow oscillation was best observed at the resting Vm and was reduced at about -100 mV. Simultaneous recording of another cell across the membrane demonstrated synchronous inhibitory periods in both neurons. Intracellular diffusion of Cl- or Cs+ reduced the amplitude and/or duration of cyclic long-lasting hyperpolaryzations.(ABSTRACT TRUNCATED AT 400 WORDS)

Bradford B. Lowell,  Brian Choi,  Streamson Chua … (2011)
Leptin acts in the brain to prevent obesity. The underlying neurocircuitry responsible for this is poorly understood, in part because of incomplete knowledge regarding first-order, leptin-responsive neurons. To address this, we and others have been removing leptin receptors from candidate first-order neurons. While functionally relevant neurons have been identified, the observed effects have been small, suggesting that most first-order neurons remain unidentified. Here we take an alternative approach and test whether first-order neurons are inhibitory (GABAergic, VGAT⁺) or excitatory (glutamatergic, VGLUT2⁺). Remarkably, the vast majority of leptin's antiobesity effects are mediated by GABAergic neurons; glutamatergic neurons play only a minor role. Leptin, working directly on presynaptic GABAergic neurons, many of which appear not to express AgRP, reduces inhibitory tone to postsynaptic POMC neurons. As POMC neurons prevent obesity, their disinhibition by leptin action on presynaptic GABAergic neurons probably mediates, at least in part, leptin's antiobesity effects. Copyright © 2011 Elsevier Inc. All rights reserved.