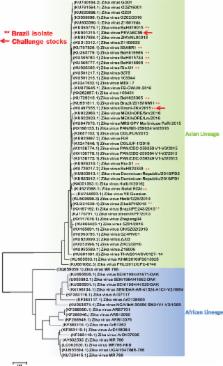 Zika virus (ZIKV) is a flavivirus that is responsible for an unprecedented current epidemic in Brazil and the Americas 1, 2 . ZIKV has been causally associated with fetal microcephaly, intrauterine growth restriction, and other birth defects in both humans 3– 8 and mice 9– 11 . The rapid development of a safe and effective ZIKV vaccine is a global health priority 1, 2 , but very little is currently known about ZIKV immunology and mechanisms of immune protection. Here we show that a single immunization of a plasmid DNA vaccine or a purified inactivated virus vaccine provides complete protection in susceptible mice against challenge with a ZIKV outbreak strain from northeast Brazil. This ZIKV strain has recently been shown to cross the placenta and to induce fetal microcephaly and other congenital malformations in mice 11 . We produced DNA vaccines expressing full-length ZIKV pre-membrane and envelope (prM-Env) as well as a series of deletion mutants. The full-length prM-Env DNA vaccine, but not the deletion mutants, afforded complete protection against ZIKV as measured by absence of detectable viremia following challenge, and protective efficacy correlated with Env-specific antibody titers. Adoptive transfer of purified IgG from vaccinated mice conferred passive protection, and CD4 and CD8 T lymphocyte depletion in vaccinated mice did not abrogate protective efficacy. These data demonstrate that protection against ZIKV challenge can be achieved by single-shot subunit and inactivated virus vaccines in mice and that Env-specific antibody titers represent key immunologic correlates of protection. Our findings suggest that the development of a ZIKV vaccine for humans will likely be readily achievable.

Jernej Mlakar,  Miša Korva,  Nataša Tul … (2016)
A widespread epidemic of Zika virus (ZIKV) infection was reported in 2015 in South and Central America and the Caribbean. A major concern associated with this infection is the apparent increased incidence of microcephaly in fetuses born to mothers infected with ZIKV. In this report, we describe the case of an expectant mother who had a febrile illness with rash at the end of the first trimester of pregnancy while she was living in Brazil. Ultrasonography performed at 29 weeks of gestation revealed microcephaly with calcifications in the fetal brain and placenta. After the mother requested termination of the pregnancy, a fetal autopsy was performed. Micrencephaly (an abnormally small brain) was observed, with almost complete agyria, hydrocephalus, and multifocal dystrophic calcifications in the cortex and subcortical white matter, with associated cortical displacement and mild focal inflammation. ZIKV was found in the fetal brain tissue on reverse-transcriptase-polymerase-chain-reaction (RT-PCR) assay, with consistent findings on electron microscopy. The complete genome of ZIKV was recovered from the fetal brain.

Zika Virus and Birth Defects--Reviewing the Evidence for Causality.

Patrícia Brasil,  José Pereira,  Claudia Raja- Gabaglia … (2016)
Background Zika virus (ZIKV) has been linked to neonatal microcephaly. To characterize the spectrum of ZIKV disease in pregnancy, we followed patients in Rio de Janeiro to describe clinical manifestations in mothers and repercussions of acute ZIKV infection in fetuses. Methods We enrolled pregnant women in whom a rash had developed within the previous 5 days and tested blood and urine specimens for ZIKV by reverse-transcriptase-polymerase-chain-reaction assays. We followed the women prospectively and collected clinical and ultrasonographic data. Results A total of 88 women were enrolled from September 2015 through February 2016; of these 88 women, 72 (82%) tested positive for ZIKV in blood, urine, or both. The timing of acute ZIKV infection ranged from 5 to 38 weeks of gestation. Predominant clinical features included pruritic descending macular or maculopapular rash, arthralgias, conjunctival injection, and headache; 28% had fever (short-term and low-grade). Women who were positive for ZIKV were more likely than those who were negative for the virus to have maculopapular rash (44% vs. 12%, P=0.02), conjunctival involvement (58% vs. 13%, P=0.002), and lymphadenopathy (40% vs. 7%, P=0.02). Fetal ultrasonography was performed in 42 ZIKV-positive women (58%) and in all ZIKV-negative women. Fetal abnormalities were detected by Doppler ultrasonography in 12 of the 42 ZIKV-positive women (29%) and in none of the 16 ZIKV-negative women. Adverse findings included fetal deaths at 36 and 38 weeks of gestation (2 fetuses), in utero growth restriction with or without microcephaly (5 fetuses), ventricular calcifications or other central nervous system (CNS) lesions (7 fetuses), and abnormal amniotic fluid volume or cerebral or umbilical artery flow (7 fetuses). To date, 8 of the 42 women in whom fetal ultrasonography was performed have delivered their babies, and the ultrasonographic findings have been confirmed. Conclusions Despite mild clinical symptoms, ZIKV infection during pregnancy appears to be associated with grave outcomes, including fetal death, placental insufficiency, fetal growth restriction, and CNS injury.