Attention-deficit hyperactivity disorder in adults: A systematic review and meta-analysis of genetic, pharmacogenetic and biochemical studies 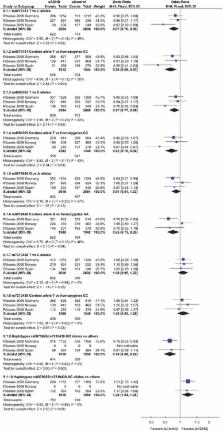 The adult form of attention-deficit/hyperactivity disorder has a prevalence of up to 5% and is the most severe long-term outcome of this common disorder. Family studies in clinical samples as well as twin studies suggest a familial liability and consequently different genes were investigated in association studies. Pharmacotherapy with methylphenidate (MPH) seems to be the first-line treatment of choice in adults with attention-deficit hyperactive disorder (ADHD) and some studies were conducted on the genes influencing the response to this drug. Finally some peripheral biomarkers were identified in ADHD adult patients. We believe this work is the first systematic review and meta-analysis of candidate gene association studies, pharmacogenetic and biochemical (metabolomics) studies performed in adults with ADHD to identify potential genetic, predictive and peripheral markers linked specifically to ADHD in adults. After screening 5129 records, we selected 87 studies of which 61 were available for candidate gene association studies, 5 for pharmacogenetics and 21 for biochemical studies. Of these, 15 genetic, 2 pharmacogenetic and 6 biochemical studies were included in the meta-analyses. We obtained an association between adult ADHD and the gene BAIAP2 (brain-specific angiogenesis inhibitor 1-associated protein 2), even after Bonferroni correction, with any heterogeneity in effect size and no publication bias. If we did not apply the Bonferroni correction, a trend was found for the carriers allele 9R of dopamine transporter SLC6A3 40 bp variable tandem repeat polymorphism (VNTR) and for 6/6 homozygotes of SLC6A3 30 bp VNTR. Negative results were obtained for the 9-6 haplotype, the dopamine receptor DRD4 48 bp VNTR, and the enzyme COMT SNP rs4680. Concerning pharmacogenetic studies, no association was found for the SLC6A3 40 bp and response to MPH with only two studies selected. For the metabolomics studies, no differences between ADHD adults and controls were found for salivary cortisol, whereas lower serum docosahexaenoic acid (DHA) levels were found in ADHD adults. This last association was significant even after Bonferroni correction and in absence of heterogeneity. Other polyunsaturated fatty acids (PUFAs) such as AA (arachidonic acid), EPA (eicosapentaenoic acid) and DyLA (dihomogammalinolenic acid) levels were not different between patients and controls. No publication biases were observed for these markers. Genes linked to dopaminergic, serotoninergic and noradrenergic signaling, metabolism ( DBH, TPH1, TPH2, DDC, MAOA, MAOB, BCHE and TH), neurodevelopment ( BDNF and others), the SNARE system and other forty genes/proteins related to different pathways were not meta-analyzed due to insufficient data. In conclusion, we found that there were not enough genetic, pharmacogenetic and biochemical studies of ADHD in adults and that more investigations are needed. Moreover we confirmed a significant role of BAIAP2 and DHA in the etiology of ADHD exclusively in adults. Future research should be focused on the replication of these findings and to assess their specificity for ADHD.

The worldwide prevalence of ADHD: a systematic review and metaregression analysis.

Guilherme Polanczyk,  Maurício Silva de Lima,  Bernardo Lessa Horta … (2007)
The worldwide prevalence estimates of attention deficit hyperactivity disorder (ADHD)/hyperkinetic disorder (HD) are highly heterogeneous. Presently, the reasons for this discrepancy remain poorly understood. The purpose of this study was to determine the possible causes of the varied worldwide estimates of the disorder and to compute its worldwide-pooled prevalence. The authors searched MEDLINE and PsycINFO databases from January 1978 to December 2005 and reviewed textbooks and reference lists of the studies selected. Authors of relevant articles from North America, South America, Europe, Africa, Asia, Oceania, and the Middle East and ADHD/HD experts were contacted. Surveys were included if they reported point prevalence of ADHD/HD for subjects 18 years of age or younger from the general population or schools according to DSM or ICD criteria. The literature search generated 9,105 records, and 303 full-text articles were reviewed. One hundred and two studies comprising 171,756 subjects from all world regions were included. The ADHD/HD worldwide-pooled prevalence was 5.29%. This estimate was associated with significant variability. In the multivariate metaregression model, diagnostic criteria, source of information, requirement of impairment for diagnosis, and geographic origin of the studies were significantly associated with ADHD/HD prevalence rates. Geographic location was associated with significant variability only between estimates from North America and both Africa and the Middle East. No significant differences were found between Europe and North America. Our findings suggest that geographic location plays a limited role in the reasons for the large variability of ADHD/HD prevalence estimates worldwide. Instead, this variability seems to be explained primarily by the methodological characteristics of studies.

The prevalence and correlates of adult ADHD in the United States: results from the National Comorbidity Survey Replication.

Ronald C Kessler,  Lenard Adler,  Russell Barkley … (2006)
Despite growing interest in adult attention deficit hyperactivity disorder (ADHD), little is known about its prevalence or correlates. A screen for adult ADHD was included in a probability subsample (N=3,199) of 18-44-year-old respondents in the National Comorbidity Survey Replication, a nationally representative household survey that used a lay-administered diagnostic interview to assess a wide range of DSM-IV disorders. Blinded clinical follow-up interviews of adult ADHD were carried out with 154 respondents, oversampling those with positive screen results. Multiple imputation was used to estimate prevalence and correlates of clinician-assessed adult ADHD. The estimated prevalence of current adult ADHD was 4.4%. Significant correlates included being male, previously married, unemployed, and non-Hispanic white. Adult ADHD was highly comorbid with many other DSM-IV disorders assessed in the survey and was associated with substantial role impairment. The majority of cases were untreated, although many individuals had obtained treatment for other comorbid mental and substance-related disorders. Efforts are needed to increase the detection and treatment of adult ADHD. Research is needed to determine whether effective treatment would reduce the onset, persistence, and severity of disorders that co-occur with adult ADHD.

The prevalence of DSM-IV attention-deficit/hyperactivity disorder: a meta-analytic review.

Erik Willcutt (2012)
This article describes a comprehensive meta-analysis that was conducted to estimate the prevalence of attention-deficit/hyperactivity disorder (ADHD), as defined by the Diagnostic and Statistical Manual of Mental Disorders, fourth edition (DSM-IV). A systematic literature review identified 86 studies of children and adolescents (N = 163,688 individuals) and 11 studies of adults (N = 14,112 individuals) that met inclusion criteria for the meta-analysis, more than half of which were published after the only previous meta-analysis of the prevalence of ADHD was completed. Although prevalence estimates reported by individual studies varied widely, pooled results suggest that the prevalence of DSM-IV ADHD is similar, whether ADHD is defined by parent ratings, teacher ratings, or a best estimate diagnostic procedure in children and adolescents (5.9-7.1 %), or by self-report measures in young adults (5.0 %). Analyses of diagnostic subtypes indicated that the predominantly inattentive type is the most common subtype in the population, but individuals with the combined type are more likely to be referred for clinical services. Additional research is needed to determine the etiology of the higher prevalence of ADHD in males than females and to clarify whether the prevalence of ADHD varies as a function of socioeconomic status or ethnicity. Finally, there were no significant prevalent differences between countries or regions of the world after controlling for differences in the diagnostic algorithms used to define ADHD. These results provide important support for the diagnostic validity of ADHD, and argue against the hypothesis that ADHD is a cultural construct that is restricted to the United States or any other specific culture.