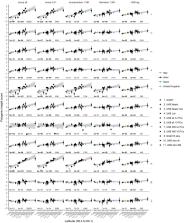 Genetic predictions of height differ among human populations and these differences have been interpreted as evidence of polygenic adaptation. These differences were first detected using SNPs genome-wide significantly associated with height, and shown to grow stronger when large numbers of sub-significant SNPs were included, leading to excitement about the prospect of analyzing large fractions of the genome to detect polygenic adaptation for multiple traits. Previous studies of height have been based on SNP effect size measurements in the GIANT Consortium meta-analysis. Here we repeat the analyses in the UK Biobank, a much more homogeneously designed study. We show that polygenic adaptation signals based on large numbers of SNPs below genome-wide significance are extremely sensitive to biases due to uncorrected population stratification. More generally, our results imply that typical constructions of polygenic scores are sensitive to population stratification and that population-level differences should be interpreted with caution.

Editorial note: This article has been through an editorial process in which the authors decide how to respond to the issues raised during peer review. The Reviewing Editor's assessment is that all the issues have been addressed ( see decision letter).

Michael Turchin,  Charleston Chiang,  Cameron D. Palmer … (2012)
Strong signatures of positive selection at newly arising genetic variants are well-documented in humans 1–8 , but this form of selection may not be widespread in recent human evolution 9 . Because many human traits are highly polygenic and partly determined by common, ancient genetic variation, an alternative model for rapid genetic adaptation has been proposed: weak selection acting on many pre-existing (standing) genetic variants, or polygenic adaptation 10–12 . By studying height, a classic polygenic trait, we demonstrate the first human signature of widespread selection on standing variation. We show that frequencies of alleles associated with increased height, both at known loci and genome-wide, are systematically elevated in Northern Europeans compared with Southern Europeans (p<4.3×10−4). This pattern mirrors intra-European height differences and is not confounded by ancestry or other ascertainment biases. The systematic frequency differences are consistent with the presence of widespread weak selection (selection coefficients ~10−3–10−5 per allele) rather than genetic drift alone (p<10−15).

These authors also contributed equally to this work.