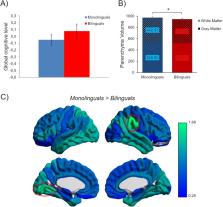 Evidence from previous studies suggests that bilingualism contributes to cognitive reserve because bilinguals manifest the first symptoms of Alzheimer’s disease (AD) up to 5 years later than monolinguals. Other cross-sectional studies demonstrate that bilinguals show greater amounts of brain atrophy and hypometabolism than monolinguals, despite sharing the same diagnosis and suffering from the same symptoms. However, these studies may be biased by possible pre-existing between-group differences.

In this study, we used global parenchymal measures of atrophy and cognitive tests to investigate the protective effect of bilingualism against dementia cross-sectionally and prospectively, using a sample of bilinguals and monolinguals in the same clinical stage and matched on sociodemographic variables.

Our results suggest that the two groups did not differ in their cognitive status at baseline, but bilinguals had less parenchymal volume than monolinguals, especially in areas related to brain atrophy in dementia. In addition, a longitudinal prospective analysis revealed that monolinguals lost more parenchyma and had more cognitive decline than bilinguals in a mean follow-up period of 7 months.

These results provide the first prospective evidence that bilingualism may act as a neuroprotective factor against dementia and could be considered a factor in cognitive reserve.

Construction of a 3D probabilistic atlas of human cortical structures.

David W. Shattuck,  Mubeena Mirza,  Vitria Adisetiyo … (2008)
We describe the construction of a digital brain atlas composed of data from manually delineated MRI data. A total of 56 structures were labeled in MRI of 40 healthy, normal volunteers. This labeling was performed according to a set of protocols developed for this project. Pairs of raters were assigned to each structure and trained on the protocol for that structure. Each rater pair was tested for concordance on 6 of the 40 brains; once they had achieved reliability standards, they divided the task of delineating the remaining 34 brains. The data were then spatially normalized to well-known templates using 3 popular algorithms: AIR5.2.5's nonlinear warp (Woods et al., 1998) paired with the ICBM452 Warp 5 atlas (Rex et al., 2003), FSL's FLIRT (Smith et al., 2004) was paired with its own template, a skull-stripped version of the ICBM152 T1 average; and SPM5's unified segmentation method (Ashburner and Friston, 2005) was paired with its canonical brain, the whole head ICBM152 T1 average. We thus produced 3 variants of our atlas, where each was constructed from 40 representative samples of a data processing stream that one might use for analysis. For each normalization algorithm, the individual structure delineations were then resampled according to the computed transformations. We next computed averages at each voxel location to estimate the probability of that voxel belonging to each of the 56 structures. Each version of the atlas contains, for every voxel, probability densities for each region, thus providing a resource for automated probabilistic labeling of external data types registered into standard spaces; we also computed average intensity images and tissue density maps based on the three methods and target spaces. These atlases will serve as a resource for diverse applications including meta-analysis of functional and structural imaging data and other bioinformatics applications where display of arbitrary labels in probabilistically defined anatomic space will facilitate both knowledge-based development and visualization of findings from multiple disciplines.

Matthias Schroeter,  Timo Stein,  Nina Isabel Maslowski … (2009)
Alzheimer's disease is the most common form of dementia. Its prodromal stage amnestic mild cognitive impairment is characterized by deficits of anterograde episodic memory. The development of standardized imaging inclusion criteria has to be regarded as a prerequisite for future diagnostic systems. Moreover, successful treatment requires isolating imaging markers predicting the disease. Accordingly, we conducted a systematic and quantitative meta-analysis to reveal the prototypical neural correlates of Alzheimer's disease and its prodromal stage. To prevent any a priori assumptions and enable a data-driven approach only studies applying quantitative automated whole brain analysis were included. Finally, 40 studies were identified involving 1351 patients and 1097 healthy control subjects reporting either atrophy or decreases in glucose utilization and perfusion. The currently most sophisticated and best-validated of coordinate-based voxel-wise meta-analyses was applied (anatomical likelihood estimates). The meta-analysis reveals that early Alzheimer's disease affects structurally the (trans-)entorhinal and hippocampal regions, functionally the inferior parietal lobules and precuneus. Results further may suggest that atrophy in the (trans-)entorhinal area/hippocampus and hypometabolism/hypoperfusion in the inferior parietal lobules predicts most reliably the progression from amnestic mild cognitive impairment to Alzheimer's disease, whereas changes in the posterior cingulate cortex and precuneus are unspecific. Fully developed Alzheimer's disease involved additionally a frontomedian-thalamic network. In conclusion, the meta-analysis characterizes the prototypical neural substrates of Alzheimer's disease and its prodromal stage amnestic mild cognitive impairment. By isolating predictive markers it enables successful treatment strategies in the future and contributes to standardized imaging inclusion criteria for Alzheimer's disease as suggested for future diagnostic systems.

Understanding the Consequences of Bilingualism for Language Processing and Cognition.

Judith F. Kroll,  Ellen Bialystok (2012)
Contemporary research on bilingualism has been framed by two major discoveries. In the realm of language processing, studies of comprehension and production show that bilinguals activate information about both languages when using one language alone. Parallel activation of the two languages has been demonstrated for highly proficient bilinguals as well as second language learners and appears to be present even when distinct properties of the languages themselves might be sufficient to bias attention towards the language in use. In the realm of cognitive processing, studies of executive function have demonstrated a bilingual advantage, with bilinguals outperforming their monolingual counterparts on tasks that require ignoring irrelevant information, task switching, and resolving conflict. Our claim is that these outcomes are related and have the overall effect of changing the way that both cognitive and linguistic processing are carried out for bilinguals. In this article we consider each of these domains of bilingual performance and consider the kinds of evidence needed to support this view. We argue that the tendency to consider bilingualism as a unitary phenomenon explained in terms of simple component processes has created a set of apparent controversies that masks the richness of the central finding in this work: the adult mind and brain are open to experience in ways that create profound consequences for both language and cognition.