The Hypnotic Analgesia Suggestion Mitigated the Effect of the Transcranial Direct Current Stimulation on the Descending Pain Modulatory System: A Proof of Concept Study 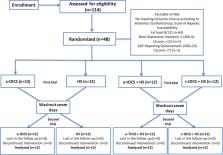 Forty-eight females received one session of one of the four interventions (a-tDCS/HS, s-tDCS/HS, a-tDCS, and s-tDCS) in an incomplete randomized crossover sequence. The a-tDCS or s-tDCS was applied over the left dorsolateral prefrontal cortex (DLPFC) for 30 minutes at 2mA.

These findings indicate that the HS combined with a-tDCS mitigated the effect of the a-tDCS on the DPMS. The a-tDCS up-regulates the inhibition on DPMS, and the HS improved pain tolerance. And, together they enhanced the reaction time substantially upon the CPT.

Michael Nitsche,  Walter Paulus (2000)
In this paper we demonstrate in the intact human the possibility of a non-invasive modulation of motor cortex excitability by the application of weak direct current through the scalp. Excitability changes of up to 40 %, revealed by transcranial magnetic stimulation, were accomplished and lasted for several minutes after the end of current stimulation. Excitation could be achieved selectively by anodal stimulation, and inhibition by cathodal stimulation. By varying the current intensity and duration, the strength and duration of the after-effects could be controlled. The effects were probably induced by modification of membrane polarisation. Functional alterations related to post-tetanic potentiation, short-term potentiation and processes similar to postexcitatory central inhibition are the likely candidates for the excitability changes after the end of stimulation. Transcranial electrical stimulation using weak current may thus be a promising tool to modulate cerebral excitability in a non-invasive, painless, reversible, selective and focal way.

Nhu D. Le,  Carrie A Dickenson,  J M Besson (1979)
(1) Sixty-eight convergent dorsal horn neurones have been recorded at the lumbar level in anaesthetized intact rats. All cells received prominent A alpha and C fibre afferents and correspondingly could be activated by high and low threshold stimuli applied to the peripheral excitatory receptive field. (2) The activity of 67/68 of these neurones was powerfully inhibited by noxious stimuli applied to various parts of the body. Since non-noxious stimuli were ineffective in this respect, the term "diffuse noxious inhibitory controls" (DNIC) is proposed. (3) DNIC could be evoked by noxious pinch applied to the tail, the contralateral hind paw, the forepaws, the ears and the muzzle; the most effective areas were the tail and muzzle. Noxious heat applied to and transcutaneous electrical stimulation of the tail were extemely effective in eliciting DNIC as was the intraperitoneal injection of bradykinin. (4) DNIC strongly depressed by 60-100% both the C fibre response following suprathreshold transcutaneous electrical stimulation and the responses to noxious radiant heat. (5) The spontaneous activity and the responses to low threshold afferents induced either by A alpha threshold electrical or natural stimulation were also powerfully inhibited. (6) In the majority of cases, long lasting post-effects directly related to the duration of conditioning painful stimulus were observed.

Richard Homan,  John Herman,  Phillip Purdy (1987)
We employed CT scanning to correlate scalp markers placed according to the international 10-20 system with underlying cerebral structures. Subjects were 12 normal volunteers. Measurements included assessment for cranial asymmetry to determine the effect of skull asymmetry on cortical location of electrodes. Results were correlated with the cortical histological map of Brodmann. Primary cortical locations agree well with previously published data and provide cortical localization in greater detail than previous studies. Variability of cortical electrode location was substantial in some cases and not related to cranial asymmetry. The results indicate that CT scanning or other neuroimaging techniques which reveal detailed cerebral anatomy would be potentially highly useful in defining the generators of electrocerebral potentials recorded from the scalp.