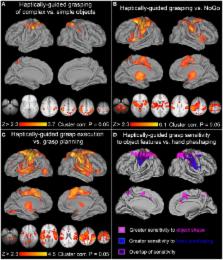 The neural bases of haptically-guided grasp planning and execution are largely unknown, especially for stimuli having no visual representations. Therefore, we used functional magnetic resonance imaging (fMRI) to monitor brain activity during haptic exploration of novel 3D complex objects, subsequent grasp planning, and the execution of the pre-planned grasps. Haptic object exploration, involving extraction of shape, orientation, and length of the to-be-grasped targets, was associated with the fronto-parietal, temporo-occipital, and insular cortex activity. Yet, only the anterior divisions of the posterior parietal cortex (PPC) of the right hemisphere were significantly more engaged in exploration of complex objects (vs. simple control disks). None of these regions were re-recruited during the planning phase. Even more surprisingly, the left-hemisphere intraparietal, temporal, and occipital areas that were significantly invoked for grasp planning did not show sensitivity to object features. Finally, grasp execution, involving the re-recruitment of the critical right-hemisphere PPC clusters, was also significantly associated with two kinds of bilateral parieto-frontal processes. The first represents transformations of grasp-relevant target features and is linked to the dorso-dorsal (lateral and medial) parieto-frontal networks. The second monitors grasp kinematics and belongs to the ventro-dorsal networks. Indeed, signal modulations associated with these distinct functions follow dorso-ventral gradients, with left aIPS showing significant sensitivity to both target features and the characteristics of the required grasp. Thus, our results from the haptic domain are consistent with the notion that the parietal processing for action guidance reflects primarily transformations from object-related to effector-related coding, and these mechanisms are rather independent of sensory input modality.

Melvyn Goodale,  Danny A. Milner (1991)
Accumulating neuropsychological, electrophysiological and behavioural evidence suggests that the neural substrates of visual perception may be quite distinct from those underlying the visual control of actions. In other words, the set of object descriptions that permit identification and recognition may be computed independently of the set of descriptions that allow an observer to shape the hand appropriately to pick up an object. We propose that the ventral stream of projections from the striate cortex to the inferotemporal cortex plays the major role in the perceptual identification of objects, while the dorsal stream projecting from the striate cortex to the posterior parietal region mediates the required sensorimotor transformations for visually guided actions directed at such objects.

A fronto-parietal circuit for object manipulation in man: evidence from an fMRI-study.

H Freund,  S Posse,  Aaron R. Seitz … (1999)
Functional magnetic resonance imaging (fMRI) was used to localize brain areas active during manipulation of complex objects. In one experiment subjects were required to manipulate complex objects for exploring their macrogeometric features as compared to manipulation of a simple smooth object (a sphere). In a second experiment subjects were asked to manipulate complex objects and to silently name them upon recognition as compared to manipulation of complex not recognizable objects without covert naming. Manipulation of complex objects resulted in an activation of ventral premotor cortex [Brodmann's area (BA) 44], of a region in the intraparietal sulcus (most probably corresponding to the anterior intraparietal area in the monkey), of area SII and of a sector of the superior parietal lobule. When the objects were covertly named additional activations were found in the opercular part of BA 44 and in the pars triangularis of the inferior frontal gyrus (BA 45). We suggest that a fronto-parietal circuit for manipulation of objects exists in humans and involves basically the same areas as in the monkey. It is proposed that area SII analyses the intrinsic object characteristics whilst the superior parietal lobule is related to kinaesthesia.

Tatiana Pasternak,  Mark Greenlee (2005)
Sensory working memory consists of the short-term storage of sensory stimuli to guide behaviour. There is increasing evidence that elemental sensory dimensions - such as object motion in the visual system or the frequency of a sound in the auditory system - are stored by segregated feature-selective systems that include not only the prefrontal and parietal cortex, but also areas of sensory cortex that carry out relatively early stages of processing. These circuits seem to have a dual function: precise sensory encoding and short-term storage of this information. New results provide insights into how activity in these circuits represents the remembered sensory stimuli.