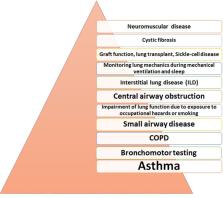 Over the past decades, impulse oscillometry (IOS) has gained ground in the battery of pulmonary function tests. Performing the test requires minimal cooperation of the patient; therefore, it is a useful tool, especially in evaluating lung mechanics in children, elderly patients, and those who cannot perform spirometry. Oscillometry has also been used in both clinical and research departments. Studies were published mainly in asthma regarding detection of bronchodilator response and the therapeutic response to different drugs. Furthermore, it has been shown to be a sensitive technique to evaluate disease control. Other studied diseases were COPD, interstitial lung diseases, small airway disease, impairment of lung function due to exposure to occupational hazards or smoking, central airways obstruction, cystic fibrosis, monitoring lung mechanics during mechanical ventilation and sleep, neuromuscular diseases, lung transplant, and graft function. The aim of this review is to present the utility of oscillometry on the previously mentioned clinical fields.

C. Scott Bickel,  Jonathan Popler,  Burton Lesnick … (2014)
Simple spirometry and body plethysmography have been routinely used in children aged > 5 years. New techniques based on physiologic concepts that were first described almost 50 years ago are emerging in research and in clinical practice for measuring pulmonary function in children. These techniques have led to an increased understanding of the pediatric lung and respiratory mechanics. Impulse oscillometry (IOS), a simple, noninvasive method using the forced oscillation technique, requires minimal patient cooperation and is suitable for use in both children and adults. This method can be used to assess obstruction in the large and small peripheral airways and has been used to measure bronchodilator response and bronchoprovocation testing. New data suggest that IOS may be useful in predicting loss of asthma control in the pediatric population. This article reviews the clinical applications of IOS, with an emphasis on the pediatric setting, and discusses appropriate coding practices for the clinician.

David Ross,  Constantine Saadeh,  D Goldman (2005)
Forced oscillation applies external pressures to the respiratory system to measure respiratory impedance. Impedance of larger central airways may be dissected from that of peripheral airways using multiple oscillation frequencies. Respiratory impedance is calculated by computer-assisted methods that yield separate resistive and reactive components. The reactive component includes respiratory system capacitative and inertive properties, which may be separately visualized for clinical purposes using resonance as a rough dividing line. Low oscillation frequencies comprise those below resonance, and relate most prominently to capacitative properties of peripheral airways. High oscillation frequencies comprise those greater than resonance, which relate most prominently to inertial properties of larger central airways. Measurements of resistance and reactance in patients with peripheral airway disease, before and after therapeutic intervention, manifest characteristic patterns of response in low frequency resistance and reactance measures that appear to be closely correlated with each other. In contrast, changes in large central airways manifest resistance change uniformly over low and high frequencies.

[1 ]Department of Pulmonology, Center for Research and Innovation in Personalized Medicine of Respiratory Diseases, University of Medicine and Pharmacy “Victor Babeș” , Timișoara, Romania