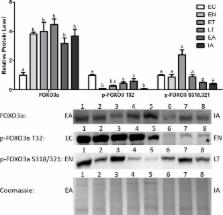 Background. Mammalian hibernation in thirteen-lined ground squirrels ( Ictidomys tridecemlineatus) is characterized by dramatic changes on a physiological and molecular level. During hibernation, mammalian hearts show a propensity to hypertrophy due to the need for increasing contractility to pump colder and more viscous blood. While cardiac hypertrophy is quite often a process characterized by decompensation, the ground squirrel studied is an excellent model of cardiac plasticity and cardioprotection under conditions of hypothermia and ischemia. The forkhead box O (Foxo) family of proteins and myogenin (MyoG) are transcription factors that control protein degradation and muscle atrophy by regulating the expression of the E3 ubiquitin ligases, MAFbx and MuRF1. These ligases are part of the ubiquitin proteasome system by transferring ubiquitin to proteins and targeting these proteins for degradation. Regulation of Foxo1 and 3a occurs through phosphorylation at different residues. The threonine-24 (Thr-24) and serine-319 (Ser-319) residues on Foxo1, and the Thr-32 residue on Foxo3a are phosphorylated by Akt, leading to cytoplasmic localization of Foxo. We propose that the described mechanism contributes to the changes taking place in cardiac muscle throughout hibernation.

Results. Immunoblotting results demonstrated upregulations in Foxo1 and Foxo3a total protein levels (1.3- and 4.5-fold increases relative to euthermic control, for Foxo1 and 3a respectively) during late torpor, and protein levels remained elevated throughout the rest of torpor and at interbout arousal. We also observed decreases in inactive, phosphorylated Foxo1 and 3a proteins during throughout torpor, where levels of p-Foxo1 Ser 319 and Thr 24, as well as p-Foxo3a Thr 32 decreased by at least 45% throughout torpor. MyoG was upregulated only during late torpor by 2.4-fold. Protein levels of MAFbx and MuRF1 increased in late torpor as well as during early arousal by as much as 2.8-fold, and MAFbx levels remained elevated during interbout arousal, whereas MuRF1 levels returned to control levels.

Discussion. The present results indicate that upregulation and activation of Foxo1 and 3a, in addition to the increase in MyoG levels at late torpor, may be upregulating the expression of MAFbx and MuRF1. These findings suggest that there is activation of the ubiquitin proteasome system (UPS) as ground squirrels arouse from torpor. Therefore, the signalling pathway involving MyoG, and the E3 ligases MAFbx and MuRF1, plays a significant role in cardiac muscle remodelling during hibernation. These findings provide insights into the regulation of protein degradation and turnover in the cardiac muscle of a hibernator model.

Stressing the role of FoxO proteins in lifespan and disease.

Boudewijn Burgering,  Armando van der Horst (2007)
Members of the class O of forkhead box transcription factors (FoxO) have important roles in metabolism, cellular proliferation, stress tolerance and probably lifespan. The activity of FoxOs is tightly regulated by post-translational modifications, including phosphorylation, acetylation and ubiquitylation. Several of the enzymes that regulate the turnover of these post-translational modifications are shared between FoxO and p53. These regulatory enzymes affect FoxO and p53 function in an opposite manner. This shared yet opposing regulatory network between FoxOs and p53 may underlie a 'trade-off' between disease and lifespan.

Hypertrophy of the heart: a new therapeutic target?

H Katus,  Eric Olson,  Joseph A. Hill … (2004)
Recent studies call into question the necessity of hypertrophic growth of the heart as a "compensatory" response to hemodynamic stress. These findings, coupled with recent progress in dissecting the molecular bases of hypertrophy, raise the prospect of suppressing hypertrophy without provoking circulatory insufficiency. In this article, we focus on signaling pathways that hold promise as potential targets for therapeutic intervention. We also summarize observations from animal models and clinical trials that suggest benefit from an antihypertrophic strategy.

Institute of Biochemistry and Department of Biology, Carleton University , Ottawa, ON, Canada