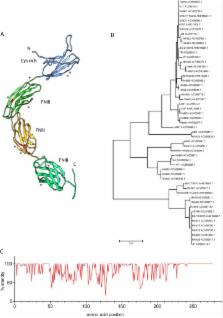 The receptor tyrosine phosphatase CD45 is expressed on the surface of almost all cells of hematopoietic origin. CD45 functions are central to the development of T cells and determine the threshold at which T and B lymphocytes can become activated. Given this pivotal role of CD45 in the immune system, it is probably not surprising that viruses interfere with the activity of CD45 in lymphocytes to dampen the immune response and that they also utilize this molecule to accomplish their replication cycle. Here we report what is known about the interaction of viral proteins with CD45. Moreover, we debate putative interactions of viruses with CD45 in myeloid cells and the resulting consequences—subjects that remain to be investigated. Finally, we summarize the evidence that pathogens were the driving force for the evolution of CD45.

An integrated view of protein evolution.

Csaba Pál,  Martin J Lercher,  Balázs Papp (2006)
Why do proteins evolve at different rates? Advances in systems biology and genomics have facilitated a move from studying individual proteins to characterizing global cellular factors. Systematic surveys indicate that protein evolution is not determined exclusively by selection on protein structure and function, but is also affected by the genomic position of the encoding genes, their expression patterns, their position in biological networks and possibly their robustness to mistranslation. Recent work has allowed insights into the relative importance of these factors. We discuss the status of a much-needed coherent view that integrates studies on protein evolution with biochemistry and functional and structural genomics.

Andrew Davison,  G. Wilkinson,  V Emery … (2004)
The genetic content of wild-type human cytomegalovirus was investigated by sequencing the 235 645 bp genome of a low passage strain (Merlin). Substantial regions of the genome (genes RL1-UL11, UL105-UL112 and UL120-UL150) were also sequenced in several other strains, including two that had not been passaged in cell culture. Comparative analyses, which employed the published genome sequence of a high passage strain (AD169), indicated that Merlin accurately reflects the wild-type complement of 165 genes, containing no obvious mutations other than a single nucleotide substitution that truncates gene UL128. A sizeable subset of genes exhibits unusually high variation between strains, and comprises many, but not all, of those that encode proteins known or predicted to be secreted or membrane-associated. In contrast to unpassaged strains, all of the passaged strains analysed have visibly disabling mutations in one or both of two groups of genes that may influence cell tropism. One comprises UL128, UL130 and UL131A, which putatively encode secreted proteins, and the other contains RL5A, RL13 and UL9, which are members of the RL11 glycoprotein gene family. The case in support of a lack of protein-coding potential in the region between UL105 and UL111A was also strengthened.

Rose Zamoyska,  Rebecca J. Brownlie (2013)
Engagement of antigen-specific T cell receptors (TCRs) is a prerequisite for T cell activation. Acquisition of appropriate effector T cell function requires the participation of multiple signals from the T cell microenvironment. Trying to understand how these signals integrate to achieve specific functional outcomes while maintaining tolerance to self is a major challenge in lymphocyte biology. Several recent publications have provided important insights into how dysregulation of T cell signalling and the development of autoreactivity can result if the branching and integration of signalling pathways are perturbed. We discuss how these findings highlight the importance of spatial segregation of individual signalling components as a way of regulating T cell responsiveness and immune tolerance.