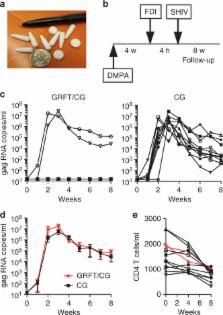 Qingsheng Li, Jacob D Estes, Patrick M. Schlievert … (2009)
While there has been great progress in treating HIV-1 infection1, preventing transmission has thus far proven an elusive goal. Indeed, recent trials of a candidate vaccine and microbicide have been disappointing, both for want of efficacy and concerns about increased rates of transmission2–4. Nonetheless, studies of vaginal transmission in the SIV-rhesus macaque model point to opportunities in the earliest stages of infection where a vaccine or microbicide might be protective, by limiting the expansion of infected founder populations at the portal of entry5, 6. Here we show in this SIV-macaque model, that an outside-in endocervical mucosal signalling system, involving MIP-3α, plasmacytoid dendritic cells and CCR5+cell-attracting chemokines produced by these cells, in combination with the innate immune and inflammatory responses to infection in both cervix and vagina, recruit CD4+T cells to fuel this obligate expansion. We then show that glycerol monolaurate, a widely used antimicrobial compound 7 with inhibitory activity against production of MIP-3α and other proinflammatory cytokines8, can inhibit mucosal signalling and the innate and inflammatory response to HIV-1 and SIV in vitro, and in vivo can protect rhesus macaques from acute infection despite repeated intra-vaginal exposure to high doses of SIV. This novel approach, plausibly linked to interfering with innate host responses that recruit the target cells necessary to establish systemic infection, opens a promising new avenue for development of effective interventions to block HIV-1 mucosal transmission.

Isolation and characterization of griffithsin, a novel HIV-inactivating protein, from the red alga Griffithsia sp.

R Gardella, Alex R. Boyd, Raymond C Sowder … (2005)
Griffithsin (GRFT), a novel anti-HIV protein, was isolated from an aqueous extract of the red alga Griffithsia sp. The 121-amino acid sequence of GRFT has been determined, and biologically active GRFT was subsequently produced by expression of a corresponding DNA sequence in Escherichia coli. Both native and recombinant GRFT displayed potent antiviral activity against laboratory strains and primary isolates of T- and M- tropic HIV-1 with EC50 values ranging from 0.043 to 0.63 nM. GRFT also aborted cell-to-cell fusion and transmission of HIV-1 infection at similar concentrations. High concentrations (e.g. 783 nM) of GRFT were not lethal to any tested host cell types. GRFT blocked CD4-dependent glycoprotein (gp) 120 binding to receptor-expressing cells and bound to viral coat glycoproteins (gp120, gp41, and gp160) in a glycosylation-dependent manner. GRFT preferentially inhibited gp120 binding of the monoclonal antibody (mAb) 2G12, which recognizes a carbohydrate-dependent motif, and the (mAb) 48d, which binds to CD4-induced epitope. In addition, GRFT moderately interfered with the binding of gp120 to sCD4. Further data showed that the binding of GRFT to soluble gp120 was inhibited by the monosaccharides glucose, mannose, and N-acetylglucosamine but not by galactose, xylose, fucose, N-acetylgalactosamine, or sialic acid-containing glycoproteins. Taken together these data suggest that GRFT is a new type of lectin that binds to various viral glycoproteins in a monosaccharide-dependent manner. GRFT could be a potential candidate microbicide to prevent the sexual transmission of HIV and AIDS.

Katharine Looker, Jocelyn A R Elmes, Sami Gottlieb … (2017)
Summary Background HIV and herpes simplex virus type 2 (HSV-2) infections cause a substantial global disease burden and are epidemiologically correlated. Two previous systematic reviews of the association between HSV-2 and HIV found evidence that HSV-2 infection increases the risk of HIV acquisition, but these reviews are now more than a decade old. Methods For this systematic review and meta-analysis, we searched PubMed, MEDLINE, and Embase (from Jan 1, 2003, to May 25, 2017) to identify studies investigating the risk of HIV acquisition after exposure to HSV-2 infection, either at baseline (prevalent HSV-2 infection) or during follow-up (incident HSV-2 infection). Studies were included if they were a cohort study, controlled trial, or case-control study (including case-control studies nested within a cohort study or clinical trial); if they assessed the effect of pre-existing HSV-2 infection on HIV acquisition; and if they determined the HSV-2 infection status of study participants with a type-specific assay. We calculated pooled random-effect estimates of the association between prevalent or incident HSV-2 infection and HIV seroconversion. We also extended previous investigations through detailed meta-regression and subgroup analyses. In particular, we investigated the effect of sex and risk group (general population vs higher-risk populations) on the relative risk (RR) of HIV acquisition after prevalent or incident HSV-2 infection. Higher-risk populations included female sex workers and their clients, men who have sex with men, serodiscordant couples, and attendees of sexually transmitted infection clinics. Findings We identified 57 longitudinal studies exploring the association between HSV-2 and HIV. HIV acquisition was almost tripled in the presence of prevalent HSV-2 infection among general populations (adjusted RR 2·7, 95% CI 2·2–3·4; number of estimates [Ne]=22) and was roughly doubled among higher-risk populations (1·7, 1·4–2·1; Ne=25). Incident HSV-2 infection in general populations was associated with the highest risk of acquisition of HIV (4·7, 2·2–10·1; Ne=6). Adjustment for confounders at the study level was often incomplete but did not significantly affect the results. We found moderate heterogeneity across study estimates, which was explained by risk group, world region, and HSV-2 exposure type (prevalent vs incident). Interpretation We found evidence that HSV-2 infection increases the risk of HIV acquisition. This finding has important implications for management of individuals diagnosed with HSV-2 infection, particularly for those who are newly infected. Interventions targeting HSV-2, such as new HSV vaccines, have the potential for additional benefit against HIV, which could be particularly powerful in regions with a high incidence of co-infection. Funding World Health Organization.