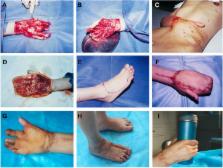 Each degloved finger was debrided under microscopic guidance and embedded in the superficial layer of the abdominal fascia. The abdominal skin was sutured to the skin on the back and side of the hand to promote circumferential healing. After removal, the only remaining injured region was on the flexor surface, and this was repaired by multiple dorsal toe flaps, toe-web flaps, and dorsalis pedis flaps to provide blood vessels and sensory nerves. All fingers had proper flap thickness 3–6 months after surgery, and required only lateral Z-plasty modification with web deepening and widening to narrow the fingers and extend their relative length.

We completed flap-graft and finger narrowing for 25 fingers in eight patients. Abdominal skin flaps and dorsal toe flaps were grafted, and resulted in both firmness and softness, providing finger flexibility. The dorsal toe flap provided good blood circulation and sensory nerves, and was used to cover the finger-flexor surface to regain sensation and stability when holding objects. During the 1–8 years of follow-up, sensation on the finger-flexor side recovered to the S3–4 level, and patient satisfaction based on the Michigan Hand Outcomes Questionnaire was 4–5. Flap ulcers or bone/tendon necrosis were not observed.

K. Chung,  J Hamill,  M R Walters … (1999)
Responsiveness is an important property of an outcomes questionnaire. It can be defined as the ability of an instrument to capture important changes in a patient's health status over time. The authors previously designed the Michigan Hand Outcomes Questionnaire (MHQ), a hand-specific outcomes instrument that contains six distinct scales: (1) overall hand function, (2) activities of daily living, (3) pain, (4) work performance, (5) aesthetics, and (6) patient satisfaction with hand function. In the first study, the authors demonstrated that the MHQ is a reliable and valid instrument for the hand. The purpose of this second study is to assess the responsiveness, or sensitivity, of the MHQ to clinical change in patient status. A total of 187 consecutive patients with chronic hand disorders completed a baseline MHQ prior to receiving treatment at a university plastic surgery clinic. Approximately 6 to 18 months after completing the first questionnaire, patients were sent a follow-up MHQ by mail. The second questionnaire was identical to the first, with the exception of one additional question added to each of the six MHQ scales. This additional question asked patients to rate the change in their hands since completing the last questionnaire using a seven-point response scale. Spearman's correlation coefficient was used to correlate the responses from patients' self-assessment questions with the actual score change (after score - before score). The response rate for the second administration was 49% (92 questionnaires returned)-a fairly good rate of return for mail surveys. There were no significant differences in gender, race, education, and income between responders and nonresponders. When patients' self-assessment of change was correlated with the change in the six scale scores over time, all six correlations were statistically significant, with p < 0.05. The correlations ranged from 0.25 for the aesthetics scale to 0.43 for the pain scale. The MHQ was responsive using patients' self-assessment of their clinical change. Future studies will evaluate the responsiveness of the MHQ compared with objective physiological measures such as grip strength, range of motion, and the Jebson-Taylor test. Additionally, research is underway to assess the responsiveness of the MHQ for specific procedures, including metacarpophalangeal arthroplasties for rheumatoid arthritis and microvascular toe-to-hand reconstructions.

Degloving injuries of the hand

Y Krishnamoorthy,  G Karthikeyan (2011)
Avulsion of skin from the hand or fingers is an injury that has a dramatic presentation. The entire musculo-skeletal unit of the finger is intact, and the patient can often move the parts of his naked hand quite normally. The challenge for the reconstructive surgeon lies in resurfacing the hand or finger with a good quality pliable sensate skin cover while preserving the movements and function of the hand. Traditionally, skin grafting has been the standard method of reconstruction in such injuries. However, skin grafting does have many disadvantages, too. This article deals with the features of such injuries, management protocols and other reconstructive options available in the armamentarium of the hand surgeon.

Treatment of traumatic degloving injuries of the fingers and hand: introducing the "compartmented abdominal flap".

Shahram Nazerani,  Bardia Bidarmaghz,  Mohammad Kalantar Motamedi … (2011)
Degloving injury of the hand and fingers is one of the most severe and debilitating hand injuries and an operation of choice is yet to be found. In this study, we introduce a modified abdominal flap, the "compartmented abdominal flap," for coverage of degloving injuries of the fingers and hand. The flaps reported up to now are diverse, and 2 or even 3 flaps in 1 session have been used to cover the hand and fingers. Often, the flaps used have mismatching colors and the donor defect is huge when 2 large flaps are used in 1 setting. In this study, we present a 1-flap solution to treat degloving injuries of the hand and fingers. The compartmented abdominal flap was used in 6 patients with different hand and/or finger degloving injuries, which were covered by a 1-flap procedure. The single flap is designed in 2 layers: the flap that is an abdominal flap is elevated as usual and at the next stage of dissection, we create a separate compartment for each finger in the superficial fatty layer of the skin flap making pockets that encircle each finger separately. An external fixator device is placed to hold the fingers in their respective pockets. The flap is severed in 3 to 4 weeks time in a serial manner. The volar surface of the fingers, which is covered by fatty tissues by then, is skin grafted at a later date. All the flaps survived and the contour of the hand and sensation was superior to the earlier flaps reported in the literature and in our earlier patients. The grasp and pinch function is better owing to the adherence of tissues to the volar surfaces of the fingers. The slippery feel of flaps over the volar surfaces of the fingers in handling objects is not felt or seen. The "compartmented abdominal flap" is a modification of the routine abdominal flap for degloving injury of the hand and fingers. The flap is designed in 2 layers: 1 layer is to cover the dorsum of the hand and the other is created in the fatty layer in separate compartments for each finger. At a later date and after flap separation, the raw volar surface is left to granulate and is then covered by a split thickness skin graft.