Current Research of Trichinellosis in China 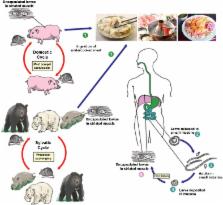 Trichinellosis, caused by Trichinella, is an emerging or re-emerging zoonotic parasitic disease, which is distributed worldwide with major socio-economic importance in some developing countries. In particular, it has been calculated that more than 40 million people are at risk of Trichinella infection in China. This review summarizes the current information on the epidemiology, laboratory diagnosis and vaccines of trichinellosis in China. Moreover, study of the treatment potential of using Trichinella for immune-related diseases and cancer, as well as the transcription and post-transcription modification of Trichinella were also collected, providing viewpoints for future investigations. Current advances in research will help us to develop new strategies for the prevention and control of trichinellosis and may potentially yield biological agents for treating other diseases.

P DORNY,  N Praet,  N Deckers … (2009)
Parasitic food-borne diseases are generally underrecognised, however they are becoming more common. Globalization of the food supply, increased international travel, increase of the population of highly susceptible persons, change in culinary habits, but also improved diagnostic tools and communication are some factors associated with the increased diagnosis of food-borne parasitic diseases worldwide. This paper reviews the most important emerging food-borne parasites, with emphasis on transmission routes. In a first part, waterborne parasites transmitted by contaminated food such as Cyclospora cayetanensis, Cryptosporidium and Giardia are discussed. Also human fasciolosis, of which the importance has only been recognised in the last decades, with total numbers of reported cases increasing from less than 3000 to 17 million, is looked at. Furthermore, fasciolopsiosis, an intestinal trematode of humans and pigs belongs to the waterborne parasites as well. A few parasites that may be transmitted through faecal contamination of foods and that have received renewed attention, such as Toxoplasma gondii, or that are (re-)emerging, such as Trypanosoma cruzi and Echinococcus spp., are briefly reviewed. In a second part, meat-borne parasite infections are reviewed. Humans get infected by eating raw or undercooked meat infected with cyst stages of these parasites. Meat inspection is the principal method applied in the control of Taenia spp. and Trichinella spp. However, it is often not very sensitive, frequently not practised, and not done for T. gondii and Sarcocystis spp. Meat of reptiles, amphibians and fish can be infected with a variety of parasites, including trematodes (Opisthorchis spp., Clonorchis sinensis, minute intestinal flukes), cestodes (Diphyllobothrium spp., Spirometra), nematodes (Gnathostoma, spp., anisakine parasites), and pentastomids that can cause zoonotic infections in humans when consumed raw or not properly cooked. Another important zoonotic food-borne trematode is the lungfluke (Paragonimus spp.). Traditionally, these parasitic zoonoses are most common in Asia because of the particular food practices and the importance of aquaculture. However, some of these parasites may emerge in other continents through aquaculture and improved transportation and distribution systems. Because of inadequate systems for routine diagnosis and monitoring or reporting for many of the zoonotic parasites, the incidence of human disease and parasite occurrence in food is underestimated. Of particular concern in industrialised countries are the highly resistant waterborne protozoal infections as well as the increased travel and immigration, which increase the exposure to exotic diseases. The increased demand for animal proteins in developing countries will lead to an intensification of the production systems in which the risk of zoonotic infections needs to be assessed. Overall, there is an urgent need for better monitoring and control of food-borne parasites using new technologies.

New pieces of the Trichinella puzzle.

Dante Zarlenga,  Edoardo Pozio (2013)
Contrary to our understanding of just a few decades ago, the genus Trichinella now consists of a complex assemblage of no less than nine different species and three additional genotypes whose taxonomic status remains in flux. New data and methodologies have allowed advancements in detection and differentiation at the population level which in turn have demonstrably advanced epidemiological, immunological and genetic investigations. In like manner, molecular and genetic studies have permitted us to hypothesise biohistorical events leading to the worldwide dissemination of this genus, and to begin crystalising the evolution of Trichinella on a macro scale. The identification of species in countries and continents otherwise considered Trichinella-free has raised questions regarding host adaptation and associations, and advanced important findings on the biogeographical histories of its members. Using past reviews as a backdrop, we have ventured to present an up-to-date assessment of the taxonomy, phylogenetic relationships and epidemiology of the genus Trichinella with additional insights on host species, survival strategies in nature and the shortcomings of our current understanding of the epidemiology of the genus. In addition, we have begun compiling information available to date on genomics, proteomics, transcriptomics and population studies of consequence in the hope we can build on this in years to come. Copyright © 2013 Australian Society for Parasitology Inc. All rights reserved.

Fei Gao,  Xiaolei Liu,  Xiu-Ping Wu … (2012)
Background DNA methylation plays an essential role in regulating gene expression under a variety of conditions and it has therefore been hypothesized to underlie the transitions between life cycle stages in parasitic nematodes. So far, however, 5'-cytosine methylation has not been detected during any developmental stage of the nematode Caenorhabditis elegans. Given the new availability of high-resolution methylation detection methods, an investigation of life cycle methylation in a parasitic nematode can now be carried out. Results Here, using MethylC-seq, we present the first study to confirm the existence of DNA methylation in the parasitic nematode Trichinella spiralis, and we characterize the methylomes of the three life-cycle stages of this food-borne infectious human pathogen. We observe a drastic increase in DNA methylation during the transition from the new born to mature stage, and we further identify parasitism-related genes that show changes in DNA methylation status between life cycle stages. Conclusions Our data contribute to the understanding of the developmental changes that occur in an important human parasite, and raises the possibility that targeting DNA methylation processes may be a useful strategy in developing therapeutics to impede infection. In addition, our conclusion that DNA methylation is a mechanism for life cycle transition in T. spiralis prompts the question of whether this may also be the case in any other metazoans. Finally, our work constitutes the first report, to our knowledge, of DNA methylation in a nematode, prompting a re-evaluation of phyla in which this epigenetic mark was thought to be absent.

This article was submitted to Infectious Diseases, a section of the journal Frontiers in Microbiology