An illustrated key to the genera and subgenera of the Alysiini (Hymenoptera, Braconidae, Alysiinae), with three genera new for China 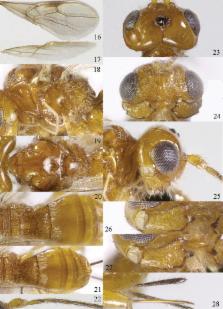 An illustrated key to the genera and subgenera of the Alysiini ( Hymenoptera , Braconidae , Alysiinae ) from China is presented. Three genera new for China are reported: Adelurola Strand, 1924, Anisocyrta Foerster, 1863, and Pentapleura Foerster, 1863. The total for China is 26 genera of Alysiini and an additional seven subgenera (excluding the nominal subgenera, which are included in the total of genera). The known Chinese species are listed under each genus and the biology is summarised. Separatatus sinicus (Zheng, Chen & Yang, 2012) and Grammospila eurys (Chen & Wu, 1994) are new combinations. Regetus Papp, 1999, and Adelphenaldis Fischer, 2003, are new synonyms of Eusynaldis Zaykov & Fischer, 1982. In addition, Eusynaldis Zaykov & Fischer and Synaldis Foerster, 1863, are treated as subgenera of Aspilota Foerster, 1863, and Dinotrema Foerster, 1863, respectively. An aberrant species of Separatatus Chen & Wu, 1994, S. parallelus sp. n., is described from Yunnan and Hainan.

Classification of the ichneumon flies, or the superfamily Ichneumonoidea

Emilio Guerrieri,  Massimo Giorgini,  Pasquale Cascone … (2016)
Drosophila suzukii (Matsumura), commonly known as Spotted Wing Drosophila (SWD), is a worldwide serious economic threat to the production of berries and stone fruits. The chemical control widely used against this pest is often not able to preventing yield losses because wild flora offers an abundance of fruits to D. suzukii where the pest is able to reproduce and from where it recolonizes neighbouring cultivated fields. Alternatively, within Integrated Pest Management protocols for D. suzukii, biological control could play a key role by reducing its populations particularly in non-cultivated habitats, thus increasing the effectiveness and reducing the side negative effects of other management strategies. Because of the scarcity and of the low efficiency of autochthonous parasitoids in the new invaded territories, in the last few years, a number of surveys started in the native area of D. suzukii to find parasitoid species to be evaluated in quarantine structures and eventually released in the field, following a classical biological control approach. This paper reports the results of these surveys carried out in South Korea and for the first time in China. Among the parasitoids collected, those belonging to the genus Asobara Foerster resulted dominant both by number and species diversity. By combining morphological characters and the mitochondrial COI gene as a molecular marker, we identified seven species of Asobara, of which two associated with D. suzukii, namely A. japonica and A leveri, and five new to science, namely Asobara brevicauda, A. elongata, A mesocauda, A unicolorata, A. triangulata. Our findings offer new opportunity to find effective parasitoids to be introduced in classical biological control programmes in the territories recently invaded by D. suzukii.

A revision of the subfamily Zelinae auct. (Hymenoptera, Braconidae).