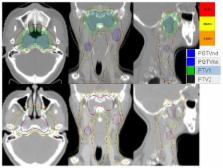 Our results show that RapidArc and HT are comparable in D98, dose homogeneity, and protection of the spinal cord and pituitary gland. RapidArc performs better in shortening delivery time, lowering MUs, and sparing the optic nerve and optic chiasm. HT is superior in dose conformity and protection of the brain stem, temporal lobe, lens, and parotid.

The enigmatic epidemiology of nasopharyngeal carcinoma.

Jeffrey Chang,  Hans-Olov Adami (2006)
Nasopharyngeal carcinoma (NPC) has a unique and complex etiology that is not completely understood. Although NPC is rare in most populations, it is a leading form of cancer in a few well-defined populations, including natives of southern China, Southeast Asia, the Arctic, and the Middle East/North Africa. The distinctive racial/ethnic and geographic distribution of NPC worldwide suggests that both environmental factors and genetic traits contribute to its development. This review aims to summarize the current knowledge regarding the epidemiology of NPC and to propose new avenues of research that could help illuminate the causes and ultimately the prevention of this remarkable disease. Well-established risk factors for NPC include elevated antibody titers against the Epstein-Barr virus, consumption of salt-preserved fish, a family history of NPC, and certain human leukocyte antigen class I genotypes. Consumption of other preserved foods, tobacco smoking, and a history of chronic respiratory tract conditions may be associated with elevated NPC risk, whereas consumption of fresh fruits and vegetables and other human leukocyte antigen genotypes may be associated with decreased risk. Evidence for a causal role of various inhalants, herbal medicines, and occupational exposures is inconsistent. Other than dietary modification, no concrete preventive measures for NPC exist. Given the unresolved gaps in understanding of NPC, there is a clear need for large-scale, population-based molecular epidemiologic studies to elucidate how environmental, viral, and genetic factors interact in both the development and the prevention of this disease.

Pierre Bey,  Loïc Feuvret,  Jean-Jacques Mazeron … (2006)
We present a critical analysis of the conformity indices described in the literature and an evaluation of their field of application. Three-dimensional conformal radiotherapy, with or without intensity modulation, is based on medical imaging techniques, three-dimensional dosimetry software, compression accessories, and verification procedures. It consists of delineating target volumes and critical healthy tissues to select the best combination of beams. This approach allows better adaptation of the isodose to the tumor volume, while limiting irradiation of healthy tissues. Tools must be developed to evaluate the quality of proposed treatment plans. Dosimetry software provides the dose distribution in each CT section and dose-volume histograms without really indicating the degree of conformity. The conformity index is a complementary tool that attributes a score to a treatment plan or that can compare several treatment plans for the same patient. The future of conformal index in everyday practice therefore remains unclear.

Volumetric modulated arc radiotherapy for carcinomas of the oro-pharynx, hypo-pharynx and larynx: a treatment planning comparison with fixed field IMRT.

Alessandro Clivio,  Giorgia Nicolini,  Ashwini Budrukkar … (2009)
A planning study was performed to evaluate the performance of volumetric modulated arc radiotherapy on head and neck cancer patients. Conventional fixed field IMRT was used as a benchmark. CT datasets of 29 patients with squamous cell carcinoma of the oro-pharynx, hypo-pharynx and larynx were included. Plans for fixed beam IMRT, single (RA1) and double (RA2) modulated arcs with the RapidArc technique were optimised. Dose prescription was set to 66 Gy to the primary tumour (at 2.2 Gy/fraction), 60 Gy to intermediate-risk nodes and 54 Gy to low-risk nodal levels. The planning objectives for PTV were minimum dose >95%, and maximum dose <107%. Maximum dose to spinal cord was limited to 46 Gy, maximum to brain stem to 50 Gy. For parotids, mean dose <26 Gy (or median <30 Gy) was assumed as the objective. The MU and delivery time were scored to measure expected treatment efficiency. Target coverage and homogeneity results improved with RA2 plans compared to both RA1 and IMRT. All the techniques fulfilled the objectives on maximum dose, while small deviations were observed on minimum dose for PTV. The conformity index (CI(95%)) was 1.7+/-0.2 for all the three techniques. RA2 allowed a reduction of D(2%) to spinal cord of approximately 3 Gy compared to IMRT (RA1 D(2%) increased it of approximately 1 Gy). On brain stem, D(2%) was reduced from 12 Gy (RA1 vs. IMRT) to 13.5 Gy (RA2 vs. IMRT). The mean dose to ipsi-lateral parotids was reduced from 40 Gy (IMRT) to 36.2 Gy (RA1) and 34.4 Gy (RA2). The mean dose to the contra-lateral gland ranged from 32.6 Gy (IMRT) to 30.9 Gy (RA1) and 28.2 Gy (RA2). RapidArc was investigated for head and neck cancer. RA1 and RA2 showed some improvements in organs at risk and healthy tissue sparing, while only RA2 offered improved target coverage with respect to conventional IMRT.