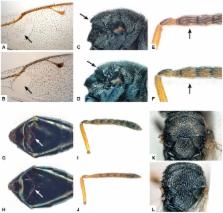 We use an integrative taxonomic approach to revise the genus Anisopteromalus. In particular, we apply multivariate ratio analysis (MRA), a rather new statistical method based on principal component analysis (PCA) and linear discriminant analysis (LDA), to numerous body measurements and combine the data with those from our molecular analysis of Cytb and ITS2 genetic markers (on a subset of species) and all available published data on morphology, karyology, behaviour, host associations and geographic distribution. We demonstrate that the analysis of quantitative characters using MRA plays a major role for the integration of name-bearing types and thus for the association of taxa with names. Six species are recognized, of which two are new: A. cornis Baur sp.n. and A. quinarius Gokhman & Baur sp.n. For Anisopteromalus calandrae (Howard), a well-known, cosmopolitan parasitoid of stored-product pests, we have selected a neotype to foster continuity and stability in the application of this important name. The species was sometimes confused with the related A. quinarius sp.n., another cosmopolitan species that is frequently encountered in similar environments. We also show that several species originally described or later put under Anisopteromalus actually belong to different genera: Cyrtoptyx camerunus (Risbec) comb.n.; Meraporus glaber (Szelényi) comb.n.; Dinarmus schwenkei (Roomi, Khan & Khan) comb.n. Neocatolaccus indicus Ayyar & Mani is confirmed as a junior synonym of Oxysychus sphenopterae (Ferrière) syn.n. and Anisopteromalus calandrae brasiliensis (Domenichini) stat.rev. must be considered as a valid but doubtful taxon.

Heterochrony and allometry: the analysis of evolutionary change in ontogeny.

C P Klingenberg (1998)
The connection between development and evolution has become the focus of an increasing amount of research in recent years, and heterochrony has long been a key concept in this relation. Heterochrony is defined as evolutionary change in rates and timing of developmental processes; the dimension of time is therefore an essential part in studies of heterochrony. Over the past two decades, evolutionary biologists have used several methodological frameworks to analyse heterochrony, which differ substantially in the way they characterize evolutionary changes in ontogenies and in the resulting classification, although they mostly use the same terms. This review examines how these methods compare ancestral and descendant ontogenies, emphasizing their differences and the potential for contradictory results from analyses using different frameworks. One of the two principal methods uses a clock as a graphical display for comparisons of size, shape and age at a particular ontogenic stage, whereas the other characterizes a developmental process by its time of onset, rate, and time of cessation. The literature on human heterochrony provides particularly clear examples of how these differences produce apparent contradictions when applied to the same problem. Developmental biologists recently have extended the concept of heterochrony to the earliest stages of development and have applied it at the cellular and molecular scale. This extension brought considerations of developmental mechanisms and genetics into the study of heterochrony, which previously was based primarily on phenomenological characterizations of morphological change in ontogeny. Allometry is the pattern of covariation among several morphological traits or between measures of size and shape; unlike heterochrony, allometry does not deal with time explicitly. Two main approaches to the study of allometry are distinguished, which differ in the way they characterize organismal form. One approach defines shape as proportions among measurements, based on considerations of geometric similarity, whereas the other focuses on the covariation among measurements in ontogeny and evolution. Both are related conceptually and through the use of similar algebra. In addition, there are close connections between heterochrony and changes in allometric growth trajectories, although there is no one-to-one correspondence. These relationships and outline links between different analytical frameworks are discussed.