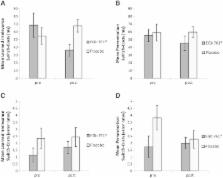 We observed indications for improved cognitive flexibility without changes in brain activation, suggesting increased processing efficiency with EGb761®. Together with a trend for improved response inhibition results are compatible with mild enhancement of prefrontal dopamine. These conclusions on potential beneficial effect of EGb761® on prefrontal dopaminergic functions should be confirmed by direct measurements. © 2016 The Authors. Human Psychopharmacology: Clinical and Experimental published by John Wiley & Sons, Ltd.

Roshan Cools,  Mark D'Esposito (2011)
Brain dopamine (DA) has long been implicated in cognitive control processes, including working memory. However, the precise role of DA in cognition is not well-understood, partly because there is large variability in the response to dopaminergic drugs both across different behaviors and across different individuals. We review evidence from a series of studies with experimental animals, healthy humans, and patients with Parkinson's disease, which highlight two important factors that contribute to this large variability. First, the existence of an optimum DA level for cognitive function implicates the need to take into account baseline levels of DA when isolating the effects of DA. Second, cognitive control is a multifactorial phenomenon, requiring a dynamic balance between cognitive stability and cognitive flexibility. These distinct components might implicate the prefrontal cortex and the striatum, respectively. Manipulating DA will thus have paradoxical consequences for distinct cognitive control processes, depending on distinct basal or optimal levels of DA in different brain regions. Copyright © 2011 Society of Biological Psychiatry. Published by Elsevier Inc. All rights reserved.

Stephen Monsell (2003)
Everyday life requires frequent shifts between cognitive tasks. Research reviewed in this article probes the control processes that reconfigure mental resources for a change of task by requiring subjects to switch frequently among a small set of simple tasks. Subjects' responses are substantially slower and, usually, more error-prone immediately after a task switch. This 'switch cost' is reduced, but not eliminated, by an opportunity for preparation. It seems to result from both transient and long-term carry-over of 'task-set' activation and inhibition as well as time consumed by task-set reconfiguration processes. Neuroimaging studies of task switching have revealed extra activation in numerous brain regions when subjects prepare to change tasks and when they perform a changed task, but we cannot yet separate 'controlling' from 'controlled' regions.

A F Arnsten,  Charles Robbins (2008)
We review the modulatory effects of the catecholamine neurotransmitters noradrenaline and dopamine on prefrontal cortical function. The effects of pharmacologic manipulations of these systems, sometimes in comparison with the indoleamine serotonin (5-HT), on performance on a variety of tasks that tap working memory, attentional-set formation and shifting, reversal learning, and response inhibition are compared in rodents, nonhuman primates, and humans using, in a behavioral context, several techniques ranging from microiontophoresis and single-cell electrophysiological recording to pharmacologic functional magnetic resonance imaging. Dissociable effects of drugs and neurotoxins affecting these monoamine systems suggest new ways of conceptualizing state-dependent fronto-executive functions, with implications for understanding the molecular genetic basis of mental illness and its treatment.