Type-II diabetes and pancreatic cancer: a meta-analysis of 36 studies 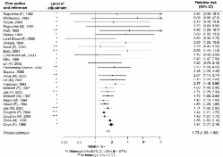 Pancreatic cancer is the eighth major form of cancer-related death worldwide, causing 227 000 deaths annually. Type-II diabetes is widely considered to be associated with pancreatic cancer, but whether this represents a causal or consequential association is unclear. We conducted a meta-analysis to examine this association. A computer-based literature search from 1966 to 2005 yielded 17 case–control and 19 cohort or nested case–control studies with information on 9220 individuals with pancreatic cancer. The age and sex-adjusted odds ratio (OR) for pancreatic cancer associated with type-II diabetes was obtained from each study. The combined summary odds ratio was 1.82 (95% confidence interval (95% CI) 1.66–1.89), with evidence of heterogeneity across the studies ( P=0.002 for case–control and P=0.05 for cohort studies) that was explained, in part, by higher risks being reported by smaller studies and studies that reported before 2000. Individuals in whom diabetes had only recently been diagnosed (<4 years) had a 50% greater risk of the malignancy compared with individuals who had diabetes for ⩾5 years (OR 2.1 vs 1.5; P=0.005). These results support a modest causal association between type-II diabetes and pancreatic cancer.

Reduction in the incidence of type 2 diabetes with lifestyle intervention or metformin.

Paul Nathan,  Elizabeth Barrett,  John M. Lachin … (2002)
Type 2 diabetes affects approximately 8 percent of adults in the United States. Some risk factors--elevated plasma glucose concentrations in the fasting state and after an oral glucose load, overweight, and a sedentary lifestyle--are potentially reversible. We hypothesized that modifying these factors with a lifestyle-intervention program or the administration of metformin would prevent or delay the development of diabetes. We randomly assigned 3234 nondiabetic persons with elevated fasting and post-load plasma glucose concentrations to placebo, metformin (850 mg twice daily), or a lifestyle-modification program with the goals of at least a 7 percent weight loss and at least 150 minutes of physical activity per week. The mean age of the participants was 51 years, and the mean body-mass index (the weight in kilograms divided by the square of the height in meters) was 34.0; 68 percent were women, and 45 percent were members of minority groups. The average follow-up was 2.8 years. The incidence of diabetes was 11.0, 7.8, and 4.8 cases per 100 person-years in the placebo, metformin, and lifestyle groups, respectively. The lifestyle intervention reduced the incidence by 58 percent (95 percent confidence interval, 48 to 66 percent) and metformin by 31 percent (95 percent confidence interval, 17 to 43 percent), as compared with placebo; the lifestyle intervention was significantly more effective than metformin. To prevent one case of diabetes during a period of three years, 6.9 persons would have to participate in the lifestyle-intervention program, and 13.9 would have to receive metformin. Lifestyle changes and treatment with metformin both reduced the incidence of diabetes in persons at high risk. The lifestyle intervention was more effective than metformin.

Min Jeon,  J-P Yun,  Jonathan M. Samet … (2005)
Diabetes is a serious and costly disease that is becoming increasingly common in many countries. The role of diabetes as a cancer risk factor remains unclear. To examine the relationship between fasting serum glucose and diabetes and risk of all cancers and specific cancers in men and women in Korea. Ten-year prospective cohort study of 1,298,385 Koreans (829,770 men and 468,615 women) aged 30 to 95 years who received health insurance from the National Health Insurance Corp and had a biennial medical evaluation in 1992-1995 (with follow-up for up to 10 years). Death from cancer and registry-documented incident cancer or hospital admission for cancer. During the 10 years of follow-up, there were 20,566 cancer deaths in men and 5907 cancer deaths in women. Using Cox proportional hazards models and controlling for smoking and alcohol use, the stratum with the highest fasting serum glucose (> or =140 mg/dL [> or =7.8 mmol/L]) had higher death rates from all cancers combined (hazard ratio [HR], 1.29; 95% confidence interval [CI], 1.22-1.37 in men and HR, 1.23; 95% CI, 1.09-1.39 in women) compared with the stratum with the lowest level (<90 mg/dL [<5.0 mmol/L]). By cancer site, the association was strongest for pancreatic cancer, comparing the highest and lowest strata in men (HR, 1.91; 95% CI, 1.52-2.41) and in women (HR, 2.05; 95% CI, 1.43-2.93). Significant associations were also found for cancers of the esophagus, liver, and colon/rectum in men and of the liver and cervix in women, and there were significant trends with glucose level for cancers of the esophagus, colon/rectum, liver, pancreas, and bile duct in men and of the liver and pancreas in women. Of the 26,473 total cancer deaths in men and women, 848 were estimated as attributable to having a fasting serum glucose level of less than 90 mg/dL. For cancer incidence, the general patterns reflected those found for mortality. For persons with a diagnosis of diabetes or a fasting serum glucose level greater than 125 mg/dL (6.9 mmol/L), risks for cancer incidence and mortality were generally elevated compared with those without diabetes. In Korea, elevated fasting serum glucose levels and a diagnosis of diabetes are independent risk factors for several major cancers, and the risk tends to increase with an increased level of fasting serum glucose.