Large-Scale Absence of Sharks on Reefs in the Greater-Caribbean: A Footprint of Human Pressures 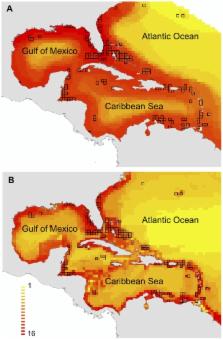 In recent decades, large pelagic and coastal shark populations have declined dramatically with increased fishing; however, the status of sharks in other systems such as coral reefs remains largely unassessed despite a long history of exploitation. Here we explore the contemporary distribution and sighting frequency of sharks on reefs in the greater-Caribbean and assess the possible role of human pressures on observed patterns.

We analyzed 76,340 underwater surveys carried out by trained volunteer divers between 1993 and 2008. Surveys were grouped within one km 2 cells, which allowed us to determine the contemporary geographical distribution and sighting frequency of sharks. Sighting frequency was calculated as the ratio of surveys with sharks to the total number of surveys in each cell. We compared sighting frequency to the number of people in the cell vicinity and used population viability analyses to assess the effects of exploitation on population trends. Sharks, with the exception of nurse sharks occurred mainly in areas with very low human population or strong fishing regulations and marine conservation. Population viability analysis suggests that exploitation alone could explain the large-scale absence; however, this pattern is likely to be exacerbated by additional anthropogenic stressors, such as pollution and habitat degradation, that also correlate with human population.

Human pressures in coastal zones have lead to the broad-scale absence of sharks on reefs in the greater-Caribbean. Preventing further loss of sharks requires urgent management measures to curb fishing mortality and to mitigate other anthropogenic stressors to protect sites where sharks still exist. The fact that sharks still occur in some densely populated areas where strong fishing regulations are in place indicates the possibility of success and encourages the implementation of conservation measures.

Collapse and conservation of shark populations in the Northwest Atlantic.

V Harley,  Jason R. Myers,  Boris Worm … (2003)
Overexploitation threatens the future of many large vertebrates. In the ocean, tunas and sea turtles are current conservation concerns because of this intense pressure. The status of most shark species, in contrast, remains uncertain. Using the largest data set in the Northwest Atlantic, we show rapid large declines in large coastal and oceanic shark populations. Scalloped hammerhead, white, and thresher sharks are each estimated to have declined by over 75% in the past 15 years. Closed-area models highlight priority areas for shark conservation, and the need to consider effort reallocation and site selection if marine reserves are to benefit multiple threatened species.

Michael Heithaus,  Alejandro Frid,  Aaron J Wirsing … (2008)
Recent studies document unprecedented declines in marine top predators that can initiate trophic cascades. Predicting the wider ecological consequences of these declines requires understanding how predators influence communities by inflicting mortality on prey and inducing behavioral modifications (risk effects). Both mechanisms are important in marine communities, and a sole focus on the effects of predator-inflicted mortality might severely underestimate the importance of predators. We outline direct and indirect consequences of marine predator declines and propose an integrated predictive framework that includes risk effects, which appear to be strongest for long-lived prey species and when resources are abundant. We conclude that marine predators should be managed for the maintenance of both density- and risk-driven ecological processes, and not demographic persistence alone.

Loss of large predatory sharks from the Mediterranean Sea.

Heike K. Lotze,  Eugene Myers,  Francesco Ferretti … (2008)
Evidence for severe declines in large predatory fishes is increasing around the world. Because of its long history of intense fishing, the Mediterranean Sea offers a unique perspective on fish population declines over historical timescales. We used a diverse set of records dating back to the early 19th and mid 20th century to reconstruct long-term population trends of large predatory sharks in the northwestern Mediterranean Sea. We compiled 9 time series of abundance indices from commercial and recreational fishery landings, scientific surveys, and sighting records. Generalized linear models were used to extract instantaneous rates of change from each data set, and a meta-analysis was conducted to compare population trends. Only 5 of the 20 species we considered had sufficient records for analysis. Hammerhead (Sphyrna spp.), blue (Prionace glauca), mackerel (Isurus oxyrinchus and Lamna nasus), and thresher sharks (Alopias vulpinus) declined between 96 and 99.99% relative to their former abundance. According to World Conservation Union (IUCN) criteria, these species would be considered critically endangered. So far, the lack of quantitative population assessments has impeded shark conservation in the Mediterranean Sea. Our study fills this critical information gap, suggesting that current levels of exploitation put large sharks at risk of extinction in the Mediterranean Sea. Possible ecosystem effects of these losses involve a disruption of top-down control and a release of midlevel consumers.