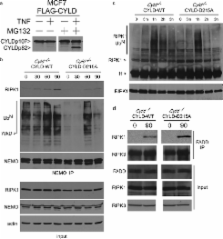 CASPASE 8 initiates apoptosis downstream of TNF death receptors by undergoing autocleavage and processing the executioner CASPASE 3 1 . However, the dominant function of CASPASE 8 is to transmit a pro-survival signal that suppresses programmed necrosis (or necroptosis) mediated by RIPK1 and RIPK3 2– 6 during embryogenesis and hematopoiesis 7– 9 . Suppression of necrotic cell death by CASPASE 8 requires its catalytic activity but not the autocleavage essential for apoptosis 10 , however, the key substrate processed by CASPASE 8 to block necrosis has been elusive. A key substrate must meet three criteria: (1) it must be essential for programmed necrosis; (2) it must be cleaved by CASPASE 8 in situations where CASPASE 8 is blocking necrosis; and (3) mutation of the CASPASE 8 processing site on the substrate should convert a pro-survival response to necrotic death without the need for CASPASE 8 inhibition. We now identify CYLD as a novel substrate for CASPASE 8 that satisfies these criteria. Upon TNF stimulation, CASPASE 8 cleaves CYLD to generate a survival signal. In contrast, loss of CASPASE 8 prevented CYLD degradation resulting in necrotic death. A CYLD substitution mutation at D215 that cannot be cleaved by CASPASE 8 switches cell survival to necrotic cell death in response to TNF.

Junichi Hitomi,  Dana E Christofferson,  Aylwin Ng … (2008)
Stimulation of death receptors by agonists such as FasL and TNFalpha activates apoptotic cell death in apoptotic-competent conditions or a type of necrotic cell death dependent on RIP1 kinase, termed necroptosis, in apoptotic-deficient conditions. In a genome-wide siRNA screen for regulators of necroptosis, we identify a set of 432 genes that regulate necroptosis, a subset of 32 genes that act downstream and/or as regulators of RIP1 kinase, 32 genes required for death-receptor-mediated apoptosis, and 7 genes involved in both necroptosis and apoptosis. We show that the expression of subsets of the 432 genes is enriched in the immune and nervous systems, and cellular sensitivity to necroptosis is regulated by an extensive signaling network mediating innate immunity. Interestingly, Bmf, a BH3-only Bcl-2 family member, is required for death-receptor-induced necroptosis. Our study defines a cellular signaling network that regulates necroptosis and the molecular bifurcation that controls apoptosis and necroptosis.

Alexander Pfeifer,  Katharina Hennecke,  Katarzyna Chmielarska Masoumi … (2006)
Mutations in the CYLD gene cause tumors of hair-follicle keratinocytes. The CYLD gene encodes a deubiquitinase that removes lysine 63-linked ubiquitin chains from TRAF2 and inhibits p65/p50 NF-kappaB activation. Here we show that mice lacking Cyld are highly susceptible to chemically induced skin tumors. Cyld-/- tumors and keratinocytes treated with 12-O-tetradecanoylphorbol-13 acetate (TPA) or UV light are hyperproliferative and have elevated cyclin D1 levels. The cyclin D1 elevation is caused not by increased p65/p50 action but rather by increased nuclear activity of Bcl-3-associated NF-kappaB p50 and p52. In Cyld+/+ keratinocytes, TPA or UV light triggers the translocation of Cyld from the cytoplasm to the perinuclear region, where Cyld binds and deubiquitinates Bcl-3, thereby preventing nuclear accumulation of Bcl-3 and p50/Bcl-3- or p52/Bcl-3-dependent proliferation. These data indicate that, depending on the external signals, Cyld can negatively regulate different NF-kappaB pathways; inactivation of TRAF2 controls survival and inflammation, while inhibition of Bcl-3 controls proliferation and tumor growth.

Sensing of Lys 63-linked polyubiquitination by NEMO is a key event in NF-kappaB activation [corrected].

Dietrich Conze,  Jonathan Ashwell,  Tao Li … (2006)
The transcription factor NF-kappaB is sequestered in the cytoplasm in a complex with IkappaB. Almost all NF-kappaB activation pathways converge on IkappaB kinase (IKK), which phosphorylates IkappaB resulting in Lys 48-linked polyubiquitination of IkappaB and its degradation. This allows migration of NF-kappaB to the nucleus where it regulates gene expression. IKK has two catalytic subunits, IKKalpha and IKKbeta, and a regulatory subunit, IKKgamma or NEMO. NEMO is essential for NF-kappaB activation, and NEMO dysfunction in humans is the cause of incontinentia pigmenti and hypohidrotic ectodermal dysplasia and immunodeficiency (HED-ID). The recruitment of IKK to occupied cytokine receptors, and its subsequent activation, are dependent on the attachment of Lys 63-linked polyubiquitin chains to signalling intermediates such as receptor-interacting protein (RIP). Here, we show that NEMO binds to Lys 63- but not Lys 48-linked polyubiquitin, and that single point mutations in NEMO that prevent binding to Lys 63-linked polyubiquitin also abrogates the binding of NEMO to RIP in tumour necrosis factor (TNF)-alpha-stimulated cells, the recruitment of IKK to TNF receptor (TNF-R) 1, and the activation of IKK and NF-kappaB. RIP is also destabilized in the absence of NEMO binding and undergoes proteasomal degradation in TNF-alpha-treated cells. These results provide a mechanism for NEMO's critical role in IKK activation, and a key to understanding the link between cytokine-receptor proximal signalling and IKK and NF-kappaB activation.