3M Syndrome: A Report of Four Cases in Two Families 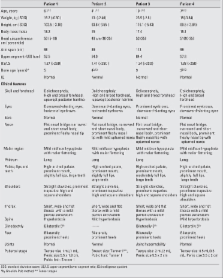 3M syndrome is a rare entity characterized by severe growth retardation, dysmorphic features and skeletal changes as its major components. It is differentiated from other types of dwarfism by its clinical features and by the typical slender long bones and

foreshortened vertebral bodies that can be visualized radiographically. 3M syndrome has an autosomal recessive mode of inheritance. An early diagnosis is important for genetic counseling. In this report, we present four children (3 males, 1 female) from two families who were aged between 411/12 and 1011/12 years and had clinical findings of 3M syndrome. One of these patients had received growth hormone (GH) treatment which was discontinued due to an inadequate height gain. Physicians should be aware of this entity in the differential diagnosis of children with severe short stature and mild skeletal changes.

T Ikeuchi,  Anna Shvedova,  A Miyashia … (2007)
In total, 43 patients having short stature syndrome in 37 Yakut families with autosomal recessive prenatal and postnatal nonprogressive growth failure and facial dysmorphism but with normal intelligence have been identified. Because Yakuts are considered as a population isolate and the disease is rare in other populations, genomewide homozygosity mapping was performed using 763 microsatellite markers and candidate gene approach in the critical region to identify the causative gene for the short stature syndrome in Yakut. All families shared an identical haplotype in the same region as the identical loci responsible for 3-M and gloomy face syndromes and a novel homozygous 4582insT mutation in Cullin 7 (CUL7) was found, which resulted in a frameshift mutation and the formation of a subsequent premature stop codon at 1553 (Q1553X). Yakut patients with short stature syndrome have unique features such as a high frequency of neonatal respiratory distress and few bone abnormalities, whereas the clinical features of the other Yakut patients were similar to those of 3-M syndrome. Furthermore, abnormal vascularisation was present in the fetal placenta and an abnormal development of cartilage tissue in the bronchus of a fetus with CUL7 mutation. These findings may provide a new understanding of the clinical diversity and pathogenesis of short stature syndrome with CUL7 mutation.

Thomas Eggermann,  Matthias Begemann,  Gerhard Binder … (2010)
Imprinted genes with a parent-of-origin specific expression are involved in various aspects of growth that are rooted in the prenatal period. Therefore it is predictable that many of the so far known congenital imprinting disorders (IDs) are clinically characterised by growth disturbances. A noteable imprinting disorder is Silver-Russell syndrome (SRS), a congenital disease characterised by intrauterine and postnatal growth retardation, relative macrocephaly, a typical triangular face, asymmetry and further less characteristic features. However, the clinical spectrum is broad and the clinical diagnosis often subjective. Genetic and epigenetic disturbances can meanwhile be detected in approximately 50% of patients with typical SRS features. Nearly one tenth of patients carry a maternal uniparental disomy of chromosome 7 (UPD(7)mat), more than 38% show a hypomethylation in the imprinting control region 1 in 11p15. More than 1% of patients show (sub)microscopic chromosomal aberrations. Interestingly, in ~7% of 11p15 hypomethylation carriers, demethylation of other imprinted loci can be detected. Clinically, these patients do not differ from those with isolated 11p15 hypomethylation whereas the UPD(7)mat patients generally show a milder phenotype. However, an unambiguous (epi)genotype-phenotype correlation can not be delineated. We therefore suggest a diagnostic algorithm focused on the 11p15 hypomethylation, UPD(7)mat and cryptic chromosomal imbalances for patients with typical SRS phenotype, but also with milder clinical signs only reminiscent for the disease.

Rebecca M Nyman,  H Jalanko,  J. Perheentupa … (2004)
Mulibrey nanism (MUL) is an autosomal recessive disease caused by mutations in the TRIM37 gene encoding the peroxisomal TRIM37 protein of unknown function. In this work, we analysed the clinical characteristics of 85 Finnish patients with MUL, most of whom were homozygous for the Finn major mutation of TRIM37. The patients' hospital records from birth to the time of the diagnosis at age 0.02-52 years (median 2.1 years) were retrospectively analysed. All except four of the patients (95%) had a prenatal onset growth failure without postnatal catch up growth. The mean length standard deviation score (SDS) was -3.1 and -4.0 at birth and at diagnosis, respectively. In infancy, feeding difficulties, and respiratory tract infections were the most common problems. Congestive heart failure and pericardial constriction were diagnosed during infancy in 12% and 6% of the patients, respectively. At the time of the diagnosis, characteristic craniofacial features of scaphocephaly, facial triangularity, high and broad forehead, and low nasal bridge were evident in over 90% of the patients. In addition, practically all patients were gracile and had thin extremities. Other findings included a peculiar high-pitched voice (96%), yellowish dots in ocular fundi (79%), cutaneous naevi flammei (65%), hepatomegaly (45%), and fibrous dysplasia of long bones (25%). Mild muscular hypotonicity (68%) was the only neurological abnormality. The clinical features of the Finnish patients with MUL formed a distinct entity. The most consistent findings were growth failure and characteristic craniofacial features. However, organ manifestations varied considerably in early childhood. Based on these findings, we propose new diagnostic criteria for MUL.