Adjuvant therapy for periampullary carcinoma and the significance of histopathological typing: A systematic review 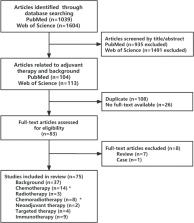 This review investigates the role of adjuvant therapy (AT) and the importance of histopathological typing in periampullary carcinoma (PAC) treatment.

PAC is a relatively rare gastrointestinal malignancy. The regimen and effect of AT in PAC are still controversial. However, there is a treatment based on histopathological types (pancreaticobiliary-type, PB-type or intestinal-type, IN-type), but there are no clear guidelines indicating that typing can be used to guide the selection of AT drugs.

A literature search of PubMed and Web of Science databases was conducted for studies published from January 2001 to August 2021 on the use of AT in PAC.

A total of 75 studies were included in this review. According to existing studies, AT for PAC is mostly based on 5-FU or gemcitabine, but the effect is unknown. However, when PAC is classified into different histopathological types, AT with gemcitabine is beneficial for patients with the PB-type of PAC, while 5-FU-based AT is beneficial for patients with the IN-type of PAC. In addition, the benefits of AT are more pronounced in patients with a high-risk disease, such as patients with stage II/III, T3/T4 tumors, or positive lymph node involvement. There are few studies on targeted therapy and immunotherapy for PAC.

This review suggests that AT has potential survival benefits, especially when based on the histopathologic type that helps the choice of drugs during AT in PAC patients.

Effect of adjuvant chemotherapy with fluorouracil plus folinic acid or gemcitabine vs observation on survival in patients with resected periampullary adenocarcinoma: the ESPAC-3 periampullary cancer randomized trial.

Juan W. Valle, Markus M. Lerch, Bengt Glimelius … (2012)
Patients with periampullary adenocarcinomas undergo the same resectional surgery as that of patients with pancreatic ductal adenocarcinoma. Although adjuvant chemotherapy has been shown to have a survival benefit for pancreatic cancer, there have been no randomized trials for periampullary adenocarcinomas. To determine whether adjuvant chemotherapy (fluorouracil or gemcitabine) provides improved overall survival following resection. The European Study Group for Pancreatic Cancer (ESPAC)-3 periampullary trial, an open-label, phase 3, randomized controlled trial (July 2000-May 2008) in 100 centers in Europe, Australia, Japan, and Canada. Of the 428 patients included in the primary analysis, 297 had ampullary, 96 had bile duct, and 35 had other cancers. One hundred forty-four patients were assigned to the observation group, 143 patients to receive 20 mg/m2 of folinic acid via intravenous bolus injection followed by 425 mg/m2 of fluorouracil via intravenous bolus injection administered 1 to 5 days every 28 days, and 141 patients to receive 1000 mg/m2 of intravenous infusion of gemcitabine once a week for 3 of every 4 weeks for 6 months. The primary outcome measure was overall survival with chemotherapy vs no chemotherapy; secondary measures were chemotherapy type, toxic effects, progression-free survival, and quality of life. Eighty-eight patients (61%) in the observation group, 83 (58%) in the fluorouracil plus folinic acid group, and 73 (52%) in the gemcitabine group died. In the observation group, the median survival was 35.2 months (95%% CI, 27.2-43.0 months) and was 43.1 (95%, CI, 34.0-56.0) in the 2 chemotherapy groups (hazard ratio, 0.86; (95% CI, 0.66-1.11; χ2 = 1.33; P = .25). After adjusting for independent prognostic variables of age, bile duct cancer, poor tumor differentiation, and positive lymph nodes and after conducting multiple regression analysis, the hazard ratio for chemotherapy compared with observation was 0.75 (95% CI, 0.57-0.98; Wald χ2 = 4.53, P = .03). Among patients with resected periampullary adenocarcinoma, adjuvant chemotherapy, compared with observation, was not associated with a significant survival benefit in the primary analysis; however, multivariable analysis adjusting for prognostic variables demonstrated a statistically significant survival benefit associated with adjuvant chemotherapy. clinicaltrials.gov Identifier: NCT00058201.

Sorafenib Plus Hepatic Arterial Infusion of Oxaliplatin, Fluorouracil, and Leucovorin vs Sorafenib Alone for Hepatocellular Carcinoma With Portal Vein Invasion

MinKe He, QiJiong Li, RuHai Zou … (2019)
Sorafenib is the first-line treatment for hepatocellular carcinoma with portal vein invasion; however, it has shown unsatisfactory survival benefit. Sorafenib plus hepatic arterial infusion chemotherapy (HAIC) of oxaliplatin, fluorouracil, and leucovorin (FOLFOX) has shown promising results for these patients in a previous phase 2 study.