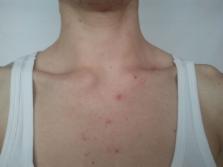 Synovitis–acne–pustulosis–hyperostosis–osteitis (SAPHO) is an acronym for various osteoarticular and dermatological manifestations that can appear in the same patient. It is a rare syndrome, but since its awareness has increased, there have been more and more such reports in the literature.

The objectives of this review are to summarize the current state of knowledge on pediatric and adult-onset SAPHO syndrome, and to discuss treatment strategies that should be considered.

The SAPHO syndrome can affect patients of any age, and its etiology is still not known. The syndrome has its cognizable radiological characteristics that are most important in making the diagnosis. There are several diagnostic criteria as well, but they need further validation. No standard treatment protocols are available and current treatment options are not evidenced-based due to the rarity of the syndrome. Therapy is empirical and aimed at easing pain and modifying the inflammatory process. It includes nonsteroidal anti-inflammatory drugs (NSAIDs) as the first-line agents. Antibiotics, corticosteroids, disease-modifying anti-rheumatic drugs, biologicals targeting tumor necrosis factor alpha or interleukin-1, and bisphosphonates have all been used with variable success. Surgery is reserved to treat complications. Even though it is a disease with good long-term prognosis, its treatment remains a challenge and the results are known to be disappointing, especially with the skin component of the disease.

It is expected that these patients present at the time of diagnosis and the treatment should be as early, effective, and safe as possible in order to prevent osteoarticular progression and to limit the adverse events associated with pharmacological drugs.

Gilles Hayem,  Agnès Bouchaud-Chabot,  Karim Benali … (1999)
To assess the long-term outcome of the synovitis, acne, pustulosis, hyperostosis, osteitis (SAPHO) syndrome. All patients with the SAPHO syndrome seen at our unit between 1974 and 1997 were identified. Follow-up was prospective from 1992 to 1997. Data before 1992 were analyzed retrospectively. Clinical symptoms, treatments and biological data, including erythrocyte sedimentation rate and C-reactive protein, were recorded at least yearly. When available, radiological data, HLA B27 status, and findings from bone or skin biopsy specimens were recorded. For each drug, an efficacy index (El) was determined as follows: "0" for less than 30% improvement, as judged by the patient, on horizontal visual analog scale, "0.5" for partial efficacy, and "1" for more than 60% improvement. We identified 120 patients with the SAPHO syndrome (50 men, 70 women), of whom 102 patients were followed-up prospectively after 1992; 3 of these 102 patients were lost to follow-up. Six patients also had Crohn's disease, and three had ulcerative colitis. Except for a significant association of palmoplantar pustulosis (PPP) or psoriasis vulgaris (PV) with axial osteitis (P = .007), the dermatologic presentation had no significant influence on rheumatic symptoms (ie, osteitis or arthritis, peripheral or axial). The HLA B27 antigen was not significantly associated with a particular pattern of distribution of arthritis or osteitis. No severe or disabling complications were noted. In the 47 patients followed-up for more than 5 years (mean, 9.5; range, 5 to 23), the mean number of osteitis or arthritis foci increased during follow-up from 1.57 to 1.91 and from 2.68 to 3.11, respectively. Nonsteroidal antiinflammatory drugs (NSAIDs) were prescribed in 113 of 120 (94%) patients, with a mean El of 0.67 (+/-0.39). Corticosteroid (CS) therapy was used in 23 patients, with a mean El of 0.67 (+/-0.42). Colchicine and sulfasalazine had a mean El of 0.36 (+/-0.44) and 0.16 (+/-0.30), in 28 and 18 patients, respectively. Methotrexate was given to 10 patients (6 with peripheral arthritis), with a mean El of 0.64 (+/-0.48). Doxycyclin (100 mg twice daily) was used in 20 patients, usually to treat osteitis, with a mean El of 0.26 (+/-0.42). Intraarticular injections of a CS or osmic acid were used in 27 patients, with a mean El of 0.77 (+/-0.35). SAPHO syndrome is a relevant and stable entity, with a good long-term prognosis. NSAIDs and intraarticular injections (CS or osmic acid) most often alleviate rheumatic symptoms, but prednisone or methotrexate are sometimes necessary and appear globally helpful.

A study of classification criteria for a diagnosis of juvenile rheumatoid arthritis.

Martina Baum,  Donald Jacobs,  J. Bass … (1986)
Criteria for the classification of juvenile rheumatoid arthritis were analyzed in a detailed database of 250 children in order to assess the accuracy of diagnosis and validity of onset types and course subtypes. A number of conclusions have been derived from this study: All definitions of the 1973 criteria for classification of juvenile rheumatoid arthritis should be retained. The addition of onset types to the 1976 revision of the criteria has been validated. The course of the disease after the onset period of 6 months is as important to the outcome of a group of children as is the onset type. The current classification should be broadened to include the course subtypes.