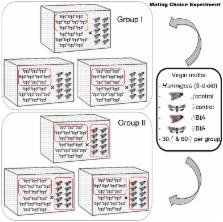 Third instar larvae of the cotton bollworm ( Helicoverpa armigera) were reared with artificial diet containing a Bacillus thuringiensis - abamectin (BtA) biopesticide mixture that resulted in 20% mortality (LD 20). The adult male survivors from larvae treated with BtA exhibited a higher percentage of “orientation” than control males but lower percentages of “approaching” and “landing” in wind tunnel bioassays. Adult female survivors from larvae treated with BtA produced higher sex pheromone titers and displayed a lower calling percentage than control females. The ratio of Z-11-hexadecenal (Z11–16:Ald) and Z-9-hexadecenal (Z9–16:Ald) in BtA-treated females changed and coefficients of variation (CV) of Z11–16:Ald and Z9–16:Ald were expanded compared to control females. The peak circadian calling time of BtA-treated females occurred later than that of control females. In mating choice experiment, both control males and BtA-treated males preferred to mate with control females and a portion of the Bt-A treated males did not mate whereas all control males did. Our Data support that treatment of larvae with BtA had an effect on the sex pheromone communication system in surviving H.armigera moths that may contribute to assortative mating.

Enhancement of attraction to sex pheromones of Spodoptera exigua by volatile compounds produced by host plants.

Andrew Baker (2008)
In the sex pheromone communication systems of moths, both heterospecific sex pheromone components and individual conspecific pheromone components may act as behavioral antagonists when they are emitted at excessive rates and ratios. In such cases, the resulting blend composition does not comprise the sex pheromone of a given species. That is, unless these compounds are emitted at optimal rates and ratios with other compounds, they act as behavioral antagonists. Thus, the array of blend compositions that are attractive to males is centered around the characterized female-produced sex pheromone blend of a species. I suggest here that the resulting optimal attraction of males to a sex pheromone is the result of olfactory antagonistic balance, compared to the would-be olfactory antagonistic imbalance imparted by behaviorally active compounds when they are emitted individually or in other off-ratio blends. Such balanced olfactory antagonism might be produced in any number of ways in olfactory pathways, one of which would be mutual, gamma-aminobutyric-acid-related disinhibition by local interneurons in neighboring glomeruli that receive excitatory inputs from pheromone-stimulated olfactory receptor neurons. Such mutual disinhibition would facilitate greater excitatory transmission to higher centers by projection interneurons arborizing in those glomeruli. I propose that in studies of moth sex pheromone olfaction, we should no longer artificially compartmentalize the olfactory effects of heterospecific behavioral antagonists into a special category distinct from olfaction involving conspecific sex pheromone components. Indeed, continuing to impose such a delineation among these compounds may retard advances in understanding how moth olfactory systems can evolve to allow males to exhibit correct behavioral responses (that is, attraction) to novel sex-pheromone-related compositions emitted by females.

Tian-Yi Zhang,  Jiu-Song Sun,  Qi-Rui Zhang … (2004)
FXPRLamide peptides encoded by the DH-PBAN (diapause hormone-pheromone biosynthesis activating neuropeptide) gene induce embryonic diapause in Bombyx mori, but terminate pupal diapause in Helicoverpa armigera (Har). Here, we explore the mechanisms of terminating pupal diapause by the FXPRLamide peptides. Using quantitative RT-PCR, we observed that expression of Har-DH-PBAN mRNA in the SG of nondiapause-type pupae was significantly higher than in diapause-type pupae. Immunocytochemical results indicated that the level of FXPRLamide peptides and axonal release are related to the diapause decision. Ecdysteroidogenesis in prothoracic glands (PGs) was stimulated by synthetic Har-DH in vivo and in vitro, and labeled Har-DH bound to the membrane of the PG, thus suggesting that DH breaks diapause by activating the PG to synthesize ecdysone. Furthermore, the response of DH in terminating diapause was temperature dependent. Decerebration experiments showed that the brain can control pupal development through the regulation of DH, and DH can terminate diapause and promote development without the brain. This result suggests a possible mechanism of response for the signals of DH and other FXPRLamide peptides in H. armigera.