Synergism Through WEE1 and CHK1 Inhibition in Acute Lymphoblastic Leukemia 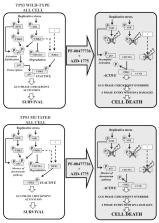 Introduction: Screening for synthetic lethality markers has demonstrated that the inhibition of the cell cycle checkpoint kinases WEE1 together with CHK1 drastically affects stability of the cell cycle and induces cell death in rapidly proliferating cells. Exploiting this finding for a possible therapeutic approach has showed efficacy in various solid and hematologic tumors, though not specifically tested in acute lymphoblastic leukemia. Methods: The efficacy of the combination between WEE1 and CHK1 inhibitors in B and T cell precursor acute lymphoblastic leukemia (B/T-ALL) was evaluated in vitro and ex vivo studies. The efficacy of the therapeutic strategy was tested in terms of cytotoxicity, induction of apoptosis, and changes in cell cycle profile and protein expression using B/T-ALL cell lines. In addition, the efficacy of the drug combination was studied in primary B-ALL blasts using clonogenic assays. Results: This study reports, for the first time, the efficacy of the concomitant inhibition of CHK1/CHK2 and WEE1 in ALL cell lines and primary leukemic B-ALL cells using two selective inhibitors: PF-0047736 (CHK1/CHK2 inhibitor) and AZD-1775 (WEE1 inhibitor). We showed strong synergism in the reduction of cell viability, proliferation and induction of apoptosis. The efficacy of the combination was related to the induction of early S-phase arrest and to the induction of DNA damage, ultimately triggering cell death. We reported evidence that the efficacy of the combination treatment is independent from the activation of the p53-p21 pathway. Moreover, gene expression analysis on B-ALL primary samples showed that Chek1 and Wee1 are significantly co-expressed in samples at diagnosis (Pearson r = 0.5770, p = 0.0001) and relapse (Pearson r= 0.8919; p = 0.0001). Finally, the efficacy of the combination was confirmed by the reduction in clonogenic survival of primary leukemic B-ALL cells. Conclusion: Our findings suggest that the combination of CHK1 and WEE1 inhibitors may be a promising therapeutic strategy to be tested in clinical trials for adult ALL.

Ansar Karimian,  Seyyed Amir Yasin Ahmadi,  Bahman Yousefi (2016)
An appropriate control over cell cycle progression depends on many factors. Cyclin-dependent kinase (CDK) inhibitor p21 (also known as p21(WAF1/Cip1)) is one of these factors that promote cell cycle arrest in response to a variety of stimuli. The inhibitory effect of P21 on cell cycle progression correlates with its nuclear localization. P21 can be induced by both p53-dependent and p53-independent mechanisms. Some other important functions attributed to p21 include transcriptional regulation, modulation or inhibition of apoptosis. These functions are largely dependent on direct p21/protein interactions and also on p21 subcellular localizations. In addition, p21 can play a role in DNA repair by interacting with proliferating cell nuclear antigen (PCNA). In this review, we will focus on the multiple functions of p21 in cell cycle regulation, apoptosis and gene transcription after DNA damage and briefly discuss the pathways and factors that have critical roles in p21 expression and activity.

Enhanced phosphorylation of p53 by ATM in response to DNA damage.

S Banin,  Y. Ziv,  Blair Anderson … (1998)
The ATM protein, encoded by the gene responsible for the human genetic disorder ataxia telangiectasia (A-T), regulates several cellular responses to DNA breaks. ATM shares a phosphoinositide 3-kinase-related domain with several proteins, some of them protein kinases. A wortmannin-sensitive protein kinase activity was associated with endogenous or recombinant ATM and was abolished by structural ATM mutations. In vitro substrates included the translation repressor PHAS-I and the p53 protein. ATM phosphorylated p53 in vitro on a single residue, serine-15, which is phosphorylated in vivo in response to DNA damage. This activity was markedly enhanced within minutes after treatment of cells with a radiomimetic drug; the total amount of ATM remained unchanged. Various damage-induced responses may be activated by enhancement of the protein kinase activity of ATM.