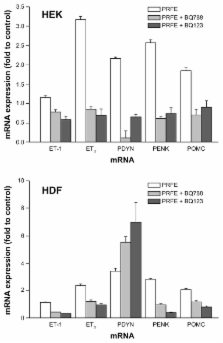 Pulsed radiofrequency energy (PRFE) fields are being used increasingly for the treatment of pain arising from dermal trauma. However, despite their increased use, little is known about the biological and molecular mechanism(s) responsible for PRFE-mediated analgesia. In general, current therapeutics used for analgesia target either endogenous factors involved in inflammation, or act on endogenous opioid pathways.

Using cultured human dermal fibroblasts (HDF) and human epidermal keratinocytes (HEK), we investigated the effect of PRFE treatment on factors, which are involved in modulating peripheral analgesia in vivo. We found that PRFE treatment did not inhibit cyclooxygenase enzyme activity, but instead had a positive effect on levels of endogenous opioid precursor mRNA (proenkephalin, pro-opiomelanocortin, prodynorphin) and corresponding opioid peptide. In HEK cells, increases in opioid mRNA were dependent, at least in part, on endothelin-1. In HDF cells, additional pathways also appear to be involved. PRFE treatment was also followed by changes in endogenous expression of several cytokines, including increased levels of interleukin-10 mRNA and decreased levels of interleukin-1β mRNA in both cell types.

These findings provide a new insight into the molecular mechanism underlying PRFE-mediated analgesia reported in the clinical setting.

R Isenberg,  Lifei Guo,  Nicole J Kubat … (2012)
To statistically evaluate published clinical efficacy data related to the use of pulsed radio frequency energy (PRFE) therapy in 3 clinical applications. Numerous clinical studies have reported efficacy outcomes for PRFE therapy use in the palliative treatment of both postoperative and nonpostoperative pain and edema, and for its use as an adjunctive wound-healing (WH) therapeutic. Although diverse in design and endpoint, these studies are amenable to systematic review using both a vote-counting and P-value combination meta-analytic technique. A meta-analysis of efficacy outcomes reported in clinical trials was performed using a vote-counting procedure. In addition, when possible, the sum of logs method of P-value combination was used to determine a significance level for the combined evidence within each endpoint and clinical area. Of the 186 clinical articles identified after application of selection criteria, there were 25 controlled trials that met criteria for inclusion in vote-counting and P-value combination methods and were used for formal statistical analysis. In total, 1332 patients receiving PRFE treatment were studied. Vote-counting procedure applied to clinical outcomes from controlled studies resulted in a greater number of positive outcomes than neutral outcomes, and zero negative outcomes, for each of the clinical application groups evaluated. The sum of logs P-value method found statistically significant improvement in pain, reduction in edema, and improvement in WH outcomes. On the basis of statistical evaluation of published clinical efficacy data, there is strong statistical evidence that PRFE therapy is effective in the treatment of postoperative and nonpostoperative pain and edema and in WH applications.

Frank Prato,  M Kavaliers,  K Ossenkopp … (1995)
Although extremely low frequency (ELF, < 300 Hz) magnetic fields exert a variety of biological effects, the magnetic field sensing/transduction mechanism (or mechanisms) remain to be identified. Using the well-defined inhibitory effects that magnetic fields have on opioid peptide mediated antinociception or "analgesia" in the land snail Cepaea nemoralis, we show that these actions only occur for certain frequency and amplitude combinations of time-varying sinusoidal magnetic fields in a manner consistent with a direct influence of these fields. We exposed snails with augmented opioid activity to ELF magnetic fields, which were varied in both amplitude and frequency, along with a parallel static magnetic field. When the peak amplitude (0-547 microT) of a magnetic field of 60 Hz was varied systematically, we observed a nonlinear response, i.e., a nonlinear reduction in analgesia as measured by the latency of a defined response by the snails to a thermal stimulus. When frequency (10-240 Hz) was varied, keeping the amplitude constant (141 microT), we saw significant inhibitory effects between 30 and 35 Hz, 60 and 90 Hz and at 120 and 240 Hz. Finally, when the static field was varied but the amplitude and frequency of the time-varying field were held constant, we observed significant inhibition at almost all amplitudes. This amplitude/frequency "resonance-like" dependence of the magnetic field effects suggests that the mechanism (or mechanisms) of response to weak ELF fields likely involves a direct magnetic field detection mechanism rather than an induced current phenomenon. We examined the implications of our findings for several models proposed for the direct sensing of ELF magnetic fields.