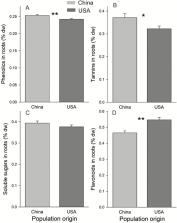 Arbuscular mycorrhizal fungi (AMF) are important mutualistic microbes in soil, which have capacity to form mutualistic associations with most land plants. Arbuscular mycorrhizal fungi play an important role in plant invasions and their interactions with invasive plants have received increasing attention. However, the chemical mechanisms underlying the interactions of AMF and invasive plants are still poorly understood. In this study we aim to test whether root secondary chemicals are related to enhanced AMF colonization and rapid growth in an invasive tree. We conducted a common garden experiment in China with Chinese tallow tree ( Triadica sebifera) to examine the relationships among AMF colonization and secondary metabolites in roots of plants from introduced (USA) and native (China) populations. We found that AMF colonization rate was higher in introduced populations compared to native populations. Roots of plants from introduced populations had lower levels of phenolics and tannins, but higher levels of flavonoids than those of plants from native populations. Flavonoids were positively correlated with AMF colonization, and this relationship was especially strong for introduced populations. Besides, AMF colonization was positively correlated with plant biomass suggesting that higher root flavonoids and AMF colonization may impact plant performance. This suggests that higher root flavonoids in plants from introduced populations may promote AMF spore germination and/or attract hyphae to their roots, which may subsequently increase plant growth. Overall, our results support a scenario in which invasive plants enhance their AMF association and invasion success via genetic changes in their root flavonoid metabolism. These findings advance our understanding of the mechanisms underlying plant invasion success and the evolutionary interactions between plants and AMF. Understanding such mechanisms of invasive plant success is critical for predicting and managing plant invasions in addition to providing important insights into the chemical mechanism of AMF–plant interactions.

Hideo Hayashi,  K Matsuzaki,  Kohki Akiyama (2005)
Arbuscular mycorrhizal (AM) fungi form mutualistic, symbiotic associations with the roots of more than 80% of land plants. The fungi are incapable of completing their life cycle in the absence of a host root. Their spores can germinate and grow in the absence of a host, but their hyphal growth is very limited. Little is known about the molecular mechanisms that govern signalling and recognition between AM fungi and their host plants. In one of the first stages of host recognition, the hyphae of AM fungi show extensive branching in the vicinity of host roots before formation of the appressorium, the structure used to penetrate the plant root. Host roots are known to release signalling molecules that trigger hyphal branching, but these branching factors have not been isolated. Here we have isolated a branching factor from the root exudates of Lotus japonicus and used spectroscopic analysis and chemical synthesis to identify it as a strigolactone, 5-deoxy-strigol. Strigolactones are a group of sesquiterpene lactones, previously isolated as seed-germination stimulants for the parasitic weeds Striga and Orobanche. The natural strigolactones 5-deoxy-strigol, sorgolactone and strigol, and a synthetic analogue, GR24, induced extensive hyphal branching in germinating spores of the AM fungus Gigaspora margarita at very low concentrations.

Lucy Gilbert,  John Caulfield,  Toby J. A. Bruce … (2013)
The roots of most land plants are colonised by mycorrhizal fungi that provide mineral nutrients in exchange for carbon. Here, we show that mycorrhizal mycelia can also act as a conduit for signalling between plants, acting as an early warning system for herbivore attack. Insect herbivory causes systemic changes in the production of plant volatiles, particularly methyl salicylate, making bean plants, Vicia faba, repellent to aphids but attractive to aphid enemies such as parasitoids. We demonstrate that these effects can also occur in aphid-free plants but only when they are connected to aphid-infested plants via a common mycorrhizal mycelial network. This underground messaging system allows neighbouring plants to invoke herbivore defences before attack. Our findings demonstrate that common mycorrhizal mycelial networks can determine the outcome of multitrophic interactions by communicating information on herbivore attack between plants, thereby influencing the behaviour of both herbivores and their natural enemies. © 2013 John Wiley & Sons Ltd/CNRS.