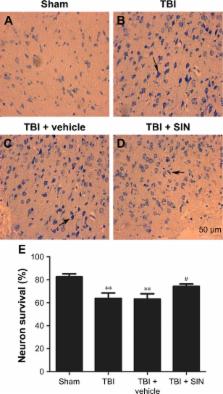 The weight-drop model of TBI in Institute of Cancer Research (ICR) mice were treated with SIN or a vehicle via intraperitoneal administration 30 min after TBI. All mice were euthanized 24 h after TBI and after neurological scoring, a series of tests were performed, including brain water content and neuronal cell death in the cerebral cortex.

The level of cytochrome c (Cyt c), malondialdehyde (MDA), glutathione peroxidase (GPx) and superoxide dismutase 1 (SOD) were restored to some degree following the SIN treatment. The SIN treatment significantly decreased caspase-3 expression and reduced the number of positive cells by terminal deoxynucleotidyl transferase-mediated dUTP nick end-labeling (TUNEL) assay and improved the survival of neuronal cells. Additionally, the pretreatment levels of MDA were restored, while Bax translocation to mitochondria and Cyt c release into the cytosol were reduced by the SIN treatment.

SIN protected neuronal cells by protecting them against apoptosis via mechanisms that involve the mitochondria following TBI.

Ke Ding,  Handong Wang,  Jianguo Xu … (2014)
The goal of this study was to evaluate the potential involvement of melatonin in the activation of the nuclear factor erythroid 2-related factor 2 and antioxidant-responsive element (Nrf2-ARE) signaling pathway and the modulation of antioxidant enzyme activity in an experimental model of traumatic brain injury (TBI). In experiment 1, ICR mice were divided into four groups: sham group, TBI group, TBI + vehicle group, and TBI + melatonin group (n = 38 per group). Melatonin (10mg/kg) was administered via an intraperitoneal (ip) injection at 0, 1, 2, 3, and 4h post-TBI. In experiment 2, Nrf2 wild-type (Nrf2(+/+) group) and Nrf2-knockout (Nrf2(-/-) group) mice received a TBI insult followed by melatonin administration (10mg/kg, ip) at the corresponding time points (n = 35 per group). The administration of melatonin after TBI significantly ameliorated the effects of the brain injury, such as oxidative stress, brain edema, and cortical neuronal degeneration. Melatonin markedly promoted the translocation of Nrf2 protein from the cytoplasm to the nucleus; increased the expression of Nrf2-ARE pathway-related downstream factors, including heme oxygenase-1 and

Luteolin provides neuroprotection in models of traumatic brain injury via the Nrf2-ARE pathway.

W. WEI,  Ling-Li Zhang,  Jianguo Xu … (2014)
Luteolin has recently been proven to exert neuroprotection in a variety of neurological diseases; however, its roles and the underlying mechanisms in traumatic brain injury are not fully understood. The present study was aimed to investigate the neuroprotective effects of luteolin in models of traumatic brain injury (TBI) and the possible role of the Nrf2-ARE pathway in the putative neuroprotection. A modified Marmarou׳s weight-drop model in mice and the scratch model in mice primary cultured neurons were used to induce TBI. We determined that luteolin significantly ameliorated secondary brain injury induced by TBI, including neurological deficits, brain water content, and neuronal apoptosis. Furthermore, the level of malondialdehyde (MDA) and the activity of glutathione peroxidase (GPx) were restored in the group with luteolin treatment. in vitro studies showed that luteolin administration lowered the intracellular reactive oxygen species (ROS) level and increased the neuron survival. Moreover, luteolin enhanced the translocation of Nrf2 to the nucleus both in vivo and in vitro, which was proved by the results of Western blot, immunohistochemistry, and electrophoretic mobility shift assay (EMSA). Subsequently upregulation of the expression of the downstream factors such as heme oxygenase 1 (HO1) and quinone oxidoreductase 1 (NQO1) was also examined. However, luteolin treatment failed to provide neuroprotection after TBI in Nrf2(-/-) mice. Taken together, these in vivo and in vitro data demonstrated that luteolin provided neuroprotective effects in the models of TBI, possibly through the activation of the Nrf2-ARE pathway. Copyright © 2014 Elsevier Inc. All rights reserved.

Florencia Arredondo,  Carolina Echeverry,  Juan Abin-Carriquiry … (2010)
In this work we describe the protective effects of quercetin against H(2)O(2) in 24-h-pretreated neuronal cultures. We explored quercetin availability and subcellular fate through the use of HPLC-Diode Array Detection (DAD), epifluorescence, and confocal microscopy. We focused on quercetin modulation of thiol-redox systems by evaluating changes in mitochondrial thioredoxin Trx2, the levels of total glutathione (GSH), and the expression of the gamma-glutamate-cysteine ligase catalytic subunit (GCLC), the rate-limiting enzyme of GSH synthesis, by the use of Western blot, HPLC, and real-time PCR techniques, respectively. We further explored the activation of the protective NF-E2-related factor 2 (Nrf2)-dependent signaling pathway by quercetin using immunocytochemistry techniques. Our results showed rapid quercetin internalization into neurons, reaching the nucleus after its addition to the culture. Quercetin pretreatment increased total GSH levels, but did not increase Trx2. Interestingly it caused Nrf2 nuclear translocation and significantly increased GCLC gene expression. At the moment of H(2)O(2) addition, intracellular quercetin or related metabolites were undetectable in the cultures although quercetin pretreatment prevented neuronal death from the oxidant exposure. Our findings suggest alternative mechanisms of quercetin neuroprotection beyond its long-established ROS scavenging properties, involving Nrf2-dependent modulation of the GSH redox system. Copyright 2010 Elsevier Inc. All rights reserved.