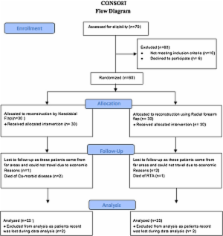 Oral sub mucous fibrosis is a rare chronic, progressive, pre malignant collagen disorder of oral mucosa in people of Asian descent characterized by trismus, blanching and stiffness of mucosa, burning sensation in mouth and hypomobility of soft palate and tongue with loss of gustatory sensation. Betel nut chewing is the most common etiological agent. Surgery remains the main stay in severe cases and aims at release of fibrotic bands and resurfacing the raw areas with different options. Reconstruction can be done by using nasolabial flap or radial free forearm flap. The purpose of this study was to compare the mouth opening after the reconstruction with either nasolabial flap or radial free forearm flap.

This study was carried out on fifty (50) patients with oral sub mucous fibrosis. Twenty five (25) of these were reconstructed by nasolabial flap and twenty five (25) were reconstructed by radial free forearm flap. At different intervals of their post-operative visits, they were evaluated for the interincisal distance and the difference between the two groups was assessed.

Based on this study radial forearm free flap is a superior method compared to transposition of nasolabial flap to cover the surgical wound of oral submucous fibrosis.

P. S. Vali,  P Rajalalitha (2005)
Oral submucous fibrosis (OSF) is a chronic debilitating disease and a premalignant condition of the oral cavity. It is characterized by a generalized submucosal fibrosis. The pathogenesis of the disease is not well established. Epidemiological evidences strongly indicate the association of the betel quid (BQ) habit and OSF. Various findings indicate the disease to be a consequence of disturbances in the homeostatic equilibrium between synthesis and degradation of extracellular matrix (ECM), wherein collagen forms a major component, thus can be considered as a collagen-metabolic disorder. Transforming growth factor-beta (TGF-beta) is a potent stimulator of production and deposition of the ECM. The objectives of this review are to highlight the molecular events involved in the overproduction of insoluble collagen and decreased degradation of collagen occurring via exposure to BQ and stimulation of the TGF-beta pathway, and elucidate the cell signaling that is involved in the etiopathogenesis of the disease process.

The precancer risk of betel quid chewing, tobacco use and alcohol consumption in oral leukoplakia and oral submucous fibrosis in southern Taiwan

C. Lee,  Y C Ko,  H-L Huang … (2003)
In areas where the practise of betel quid chewing is widespread and the chewers also often smoke and drink alcohol, the relation between oral precancerous lesion and condition to the three habits is probably complex. To explore such association and their attributable effect on oral leukoplakia (OL) and oral submucous fibrosis (OSF), a gender–age-matched case–control study was conducted at Kaohsiung, southern Taiwan. This study included 219 patients with newly diagnosed and histologically confirmed OL or OSF, and 876 randomly selected community controls. All information was collected by a structured questionnaire through in-person interviews. A preponderance of younger patients had OSF, while a predominance of older patients had OL. Betel quid chewing was strongly associated with both these oral diseases, the attributable fraction of OL being 73.2% and of OSF 85.4%. While the heterogeneity in risk for areca nut chewing across the two diseases was not apparent, betel quid chewing patients with OSF experienced a higher risk at each exposure level of chewing duration, quantity and cumulative measure than those who had OL. Alcohol intake did not appear to be a risk factor. However, cigarette smoking had a significant contribution to the risk of OL, and modified the effect of chewing based on an additive interaction model. For the two oral premalignant diseases combined, 86.5% was attributable to chewing and smoking. Our results suggested that, although betel quid chewing was a major cause for both OL and OSF, its effect might be difference between the two diseases. Cigarette smoking has a modifying effect in the development of oral leukoplakia.