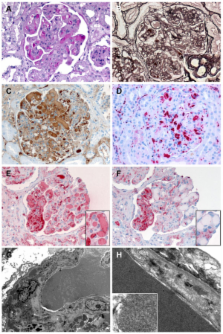 Lymphoproliferative disorders causing paraproteinemia can be associated with various kidney injuries including the deposition of monoclonal immunoglobulins (Ig). A known glomerular manifestation of Waldenström’s macroglobulinemia is characterized by prominent intracapillary hyaline thrombi and lack of conspicuous glomerular proliferation. The present case was special in 2 aspects: 1. the diagnosis of glomerulonephritis was unexpected before renal biopsy, 2. the prominent glomerular proliferation paired with large intracapillary hyaline thrombi is uncommon in Waldenström’s macroglobulinemia-associated glomerulonephritis.

A 73-year-old Caucasian woman with a long-standing history of rheumatoid arthritis and Waldenström’s macroglobulinemia was admitted for acute renal failure (ARF), which initially was presumed to be the consequence of extrarenal causes. Proteinuria and hematuria were only mild. In renal core biopsy, a membranoproliferative glomerulonephritis (MPGN) and prominent intracapillary hyaline monoclonal IgM thrombi were found in addition to acute tubular necrosis. Of note, the patient’s history was positive for purpuric skin changes, suspicious for cryoglobulinemia. However, serological tests for cryoglobulins were repeatedly negative. The ARF resolved before the start of immunomodulatory therapy for Waldenström’s macroglobulinemia.

The presence of MPGN with prominent hyaline thrombi in the context of Waldenström’s macroglobulinemia is uncommon and can be oligosymptomatic. We discuss this case in the context of previous literature and classifications suggested for monoclonal Ig-related renal pathologies.

G. Markowitz,  D A Valeri,  Anjali Satoskar … (2009)
Dysproteinemias that result in monoclonal glomerular deposits of IgG are relatively uncommon. Here, we report the largest series of proliferative glomerulonephritis with monoclonal IgG deposits, a form of renal involvement by monoclonal gammopathy that mimics immune-complex glomerulonephritis. We retrospectively identified 37 patients, most of whom were white (81%), female (62%), or older than 50 yr (65%). At presentation, 49% had nephrotic syndrome, 68% had renal insufficiency, and 77% had hematuria. In 30% of the patients, we identified a monoclonal serum protein with the same heavy- and light-chain isotypes as the glomerular deposits (mostly IgG1 or IgG2), but only one patient had myeloma. Histologic patterns were predominantly membranoproliferative (57%) or endocapillary proliferative (35%) with membranous features. Electron microscopy revealed granular, nonorganized deposits, and immunofluorescence demonstrated glomerular deposits that stained for a single light-chain isotype and a single heavy-chain subtype, most commonly IgG3kappa (53%). During an average of 30.3 mo of follow-up for 32 patients with available data, 38% had complete or partial recovery, 38% had persistent renal dysfunction, and 22% progressed to ESRD. Correlates of ESRD on univariate analysis were higher creatinine at biopsy, percentage of glomerulosclerosis, and degree of interstitial fibrosis but not immunomodulatory treatment or presence of a monoclonal spike. On multivariate analysis, higher percentage of glomerulosclerosis was the only independent predictor of ESRD. Only one patient lacking a monoclonal spike at presentation subsequently developed a monoclonal spike and no patient with a monoclonal spike at presentation subsequently developed a hematologic malignancy. We conclude that proliferative glomerulonephritis with monoclonal IgG deposits does not seem to be a precursor of myeloma in the vast majority of patients.

Cryoglobulinemia: study of etiologic factors and clinical and immunologic features in 443 patients from a single center.

The clinical and morphologic spectrum of renal cryoglobulinemia.

Srinivasan Beddhu,  Timothy Johnson,  Sheldon Bastacky (2002)
We review the clinical and histologic features of 17 patients with cryoglobulinemia and renal disease. Most cases were associated with evidence of hepatitis C virus (HCV), although a significant minority had no evidence of HCV. The most common histologic pattern for renal involvement was membranoproliferative glomerulonephritis, which was seen in both HCV-positive and HVC-negative patients. Clinical presentation was variable, including nephrotic syndrome, unexplained elevations of serum creatinine, acute renal failure, or extrarenal manifestations. All patients had type II or type III cryoglobulins and all had low serum complements at presentation. Liver function abnormalities in HCV-positive patients were mild. No clinical or laboratory features beyond hepatitis serologies were helpful in distinguishing between HCV-positive and HCV-negative patients. All but 1 HCV-positive patient were treated with interferon (IFN) in either standard or high dosage, and this treatment was largely ineffective. Five of 11 HCV-positive patients progressed to renal failure. HCV patients treated with cyclophosphamide did not develop active liver disease. In all HCV-negative patients, renal function stabilized or improved, and 5 of 6 were treated with cyclophosphamide. In our series, there is limited experience with IFN-ribavirin therapy, which was not well tolerated. Renal cryoglobulinemia is an uncommon illness of diverse etiologies and clinical presentations. Morphologic presentation is also varied. IFN alone is often inadequate therapy for HCV-associated cryoglobulinemia. Experience with IFN-ribavirin in this entity is limited, but has shown promise in hepatic disease and has shown efficacy in HCV-associated cryoglobulinemia. Cyclophosphamide is the treatment of choice for HCV-negative patients and can be used safely in most HCV-positive patients if they fail IFN or IFN-ribavirin therapy, or if they require more aggressive therapy during periods of rapid clinical progression.