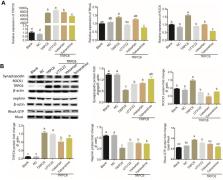 Podocyte damage is common in many renal diseases characterized by proteinuria. Transient receptor potential cation channel protein 6 (TRPC6) plays an important role in renal function through its regulation of intracellular Ca 2+ influx and RhoA/ROCK pathways. Chinese herb Stephania tetrandra, with the main active component being tetrandrine, has been used for the treatment of various kidney diseases for several years and has shown a positive effect. This study aimed at investigating the effect and mechanism of tetrandrine in podocyte damage induced by high expression of TRPC6.

Immortalized, differentiated murine podocytes, MPC5 were treated with valsartan (0–800 μM) and tetrandrine (0–40 μM) for 48 h. The maximum safe concentrations of valsartan and tetrandrine were selected using a cell viability assay. MPC5 podocytes stably expressing TRPC6 were constructed using a lentivirus packaging system, followed by treatment with valsartan, tetrandrine, and Y-27632 for 48 h and U73122 (10 μM) for 10 min. The RhoA/ROCK pathway and podocyte-specific proteins (nephrin and synaptopodin) levels were quantified. Podocyte apoptosis and intracellular Ca 2+ concentration were measured.

Heather McGee,  Dennis Brown,  I Villegas … (2005)
Progressive kidney failure is a genetically and clinically heterogeneous group of disorders. Podocyte foot processes and the interposed glomerular slit diaphragm are essential components of the permeability barrier in the kidney. Mutations in genes encoding structural proteins of the podocyte lead to the development of proteinuria, resulting in progressive kidney failure and focal segmental glomerulosclerosis. Here, we show that the canonical transient receptor potential 6 (TRPC6) ion channel is expressed in podocytes and is a component of the glomerular slit diaphragm. We identified five families with autosomal dominant focal segmental glomerulosclerosis in which disease segregated with mutations in the gene TRPC6 on chromosome 11q. Two of the TRPC6 mutants had increased current amplitudes. These data show that TRPC6 channel activity at the slit diaphragm is essential for proper regulation of podocyte structure and function.

Long-term renal survival and related risk factors in patients with IgA nephropathy: results from a cohort of 1155 cases in a Chinese adult population.

Shaoshan Liang,  Kangping Deng,  Zhihong Liu … (2012)
We sought to identify the long-term renal survival rate and related risk factors of progression to renal failure in Chinese adult patients with IgA nephropathy (IgAN) and to quantify the effects of proteinuria during the follow-up on outcome in patients with IgAN. Patients with biopsy-proven primary IgAN in the Nanjing Glomerulonephritis Registry were studied. Renal survival and the relationships between clinical parameters and renal outcomes were assessed. One thousand one hundred and fifty-five patients were enrolled in this study. The 10-, 15- and 20-year cumulative renal survival rates, calculated by Kaplan-Meier method, were 83, 74 and 64%, respectively. At the time of biopsy, proteinuria>1.0 g/day [hazard ratio (HR) 3.2, P 1.0 g/day were associated with a 9.4-fold risk than patients with TA-P<1.0 g/day (P<0.001) and 46.5-fold risk than those with TA-P<0.5 g/day (P<0.001). Moreover, patients who achieved TA-P<0.5 g/day benefit much more than those with TA-P between 0.5 and 1.0 g/day (HR 13.1, P<0.001). Thirty-six percent of Chinese adult patients with IgAN progress to end stage renal disease within 20 years. Five clinical features-higher proteinuria, hypertension, impaired renal function, hypoproteinemia and hyperuricemia-are independent predictors of an unfavorable renal outcome. The basic goal of anti-proteinuric therapy for Chinese patients is to lower proteinuria<1.0 g/day and the optimal goal is to lower proteinuria to <0.5 g/day.

Donato del Camino,  Martin R. Pollak,  Robert Carrasquillo … (2009)
Mutations in the canonical transient receptor potential channel TRPC6 lead to an autosomal dominant form of human kidney disease characterized histologically by focal and segmental glomerulosclerosis. Several of these mutations enhance the amplitude and duration of the channel current. However, the effect of these mutations on the downstream target of TRPC6, the nuclear factor of activated T cell (NFAT) transcription factors, has not been previously examined. Here we demonstrate that all three TRPC6 mutations previously shown to enhance channel activity lead to enhanced basal NFAT-mediated transcription in several cell lines, including cultured podocytes. These effects are dependent on channel activity and are dominant when mutants are coexpressed with wild-type TRPC6. While TRPC6 mutants do not demonstrate an increase in basal channel currents, a subset of cells expressing the R895C and E897K mutants have elevated basal calcium levels as measured by Fura-2 imaging. Activation of NFAT by TRPC6 mutants is blocked by inhibitors of calcineurin, calmodulin-dependent kinase II, and phosphatidylinositol 3-kinase. PP2 partially inhibits NFAT activation by mutant TRPC6 independently of Src, Yes, or Fyn. Differences in channel glycosylation and surface expression do not explain the ability of mutants to enhance NFAT activation. Taken together, these results identify the activation of the calcineurin-NFAT pathway as a potential mediator of focal segmental glomerulosclerosis.