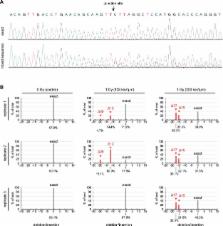 Participants in deep space missions face protracted exposure to galactic cosmic radiation (GCR). In this setting, lung cancer is a significant component of the overall risk of radiation-exposure induced death. Here we investigate persistent effects of GCR exposure on DNA repair capacity in lung-derived epithelial cells, using an enzyme-stimulated chromosomal rearrangement as an endpoint. Replicate cell cultures were irradiated with energetic 48Ti ions (a GCR component) or reference γ-rays. After a six-day recovery, they were challenged by expression of a Cas9/sgRNA pair that creates double-strand breaks simultaneously in the EML4 and ALK loci, misjoining of which creates an EML4-ALK fusion oncogene. Misjoining was significantly elevated in 48Ti-irradiated populations, relative to the baseline rate in mock-irradiated controls. The effect was not seen in γ-ray irradiated populations exposed to equal or higher radiation doses. Sequence analysis of the EML4-ALK joints from 48Ti-irradiated cultures showed that they were far more likely to contain deletions, sometimes flanked by short microhomologies, than equivalent samples from mock-irradiated cultures, consistent with a shift toward error-prone alternative nonhomologous end joining repair. Results suggest a potential mechanism by which a persistent physiological effect of GCR exposure may increase lung cancer risk.

Immortalization of human bronchial epithelial cells in the absence of viral oncoproteins.

Kenia Gandia,  Jerry W Shay,  Luc Girard … (2004)
By expressing two genes (hTERT and Cdk4), we have developed a method to reproducibly generate continuously replicating human bronchial epithelial cell (HBEC) lines that provide a novel resource to study the molecular pathogenesis of lung cancer and the differentiation of bronchial epithelial cells. Twelve human bronchial epithelial biopsy specimens obtained from persons with and without lung cancer were placed into short-term culture and serially transfected with retroviral constructs containing cyclin-dependent kinase (Cdk) 4 and human telomerase reverse transcriptase (hTERT), resulting in continuously growing cultures. The order of introduction of Cdk4 and hTERT did not appear to be important; however, transfection of either gene alone did not result in immortalization. Although they could be cloned, the immortalized bronchial cells did not form colonies in soft agar or tumors in nude mice. The immortalized HBECs have epithelial morphology; express epithelial markers cytokeratins 7, 14, 17, and 19, the stem cell marker p63, and high levels of p16(INK4a); and have an intact p53 checkpoint pathway. Cytogenetic analysis and array comparative genomic hybridization profiling show immortalized HBECs to have duplication of parts of chromosomes 5 and 20. Microarray gene expression profiling demonstrates that the Cdk4/hTERT-immortalized bronchial cell lines clustered together and with nonimmortalized bronchial cells, distinct from lung cancer cell lines. We also immortalized several parental cultures with viral oncoproteins human papilloma virus type 16 E6/E7 with and without hTERT, and these cells exhibited loss of the p53 checkpoint and significantly different gene expression profiles compared with Cdk4/hTERT-immortalized HBECs. These HBEC lines are a valuable new tool for studying of the pathogenesis of lung cancer.

David H Grinspoon,  June Myung Kim,  R Wimmer … (2014)
The Radiation Assessment Detector (RAD) on the Mars Science Laboratory's Curiosity rover began making detailed measurements of the cosmic ray and energetic particle radiation environment on the surface of Mars on 7 August 2012. We report and discuss measurements of the absorbed dose and dose equivalent from galactic cosmic rays and solar energetic particles on the martian surface for ~300 days of observations during the current solar maximum. These measurements provide insight into the radiation hazards associated with a human mission to the surface of Mars and provide an anchor point with which to model the subsurface radiation environment, with implications for microbial survival times of any possible extant or past life, as well as for the preservation of potential organic biosignatures of the ancient martian environment.