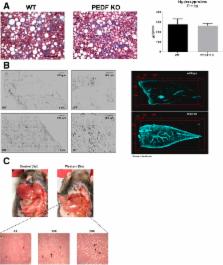 Pigment epithelium-derived factor (PEDF) is a secretory protein that inhibits multiple tumor types. PEDF inhibits the Wnt coreceptor, low-density lipoprotein receptor-related protein 6 (LRP6), in the eye, but whether the tumor-suppressive properties of PEDF occur in organs such as the liver is unknown.

Wnt-dependent regulation of PEDF was assessed in the absence and presence of the Wnt coreceptor LRP6. Whole genome expression analysis was performed on PEDF knockout (KO) and control livers (7 months). Interrogation of Wnt/β-catenin signaling was performed in whole livers and human hepatocellular carcinoma (HCC) cell lines after RNA interference of PEDF and restoration of a PEDF-derived peptide. Western diet feeding for 6 to 8 months was used to evaluate whether the absence of PEDF was permissive for HCC formation (n = 12/group).

PEDF is an endogenous inhibitor of Wnt/β-catenin signaling in the liver.

Gene expression in fixed tissues and outcome in hepatocellular carcinoma.

Todd R. Golub,  Augusto Villanueva,  Hiromitsu Kumada … (2008)
It is a challenge to identify patients who, after undergoing potentially curative treatment for hepatocellular carcinoma, are at greatest risk for recurrence. Such high-risk patients could receive novel interventional measures. An obstacle to the development of genome-based predictors of outcome in patients with hepatocellular carcinoma has been the lack of a means to carry out genomewide expression profiling of fixed, as opposed to frozen, tissue. We aimed to demonstrate the feasibility of gene-expression profiling of more than 6000 human genes in formalin-fixed, paraffin-embedded tissues. We applied the method to tissues from 307 patients with hepatocellular carcinoma, from four series of patients, to discover and validate a gene-expression signature associated with survival. The expression-profiling method for formalin-fixed, paraffin-embedded tissue was highly effective: samples from 90% of the patients yielded data of high quality, including samples that had been archived for more than 24 years. Gene-expression profiles of tumor tissue failed to yield a significant association with survival. In contrast, profiles of the surrounding nontumoral liver tissue were highly correlated with survival in a training set of tissue samples from 82 Japanese patients, and the signature was validated in tissues from an independent group of 225 patients from the United States and Europe (P=0.04). We have demonstrated the feasibility of genomewide expression profiling of formalin-fixed, paraffin-embedded tissues and have shown that a reproducible gene-expression signature correlated with survival is present in liver tissue adjacent to the tumor in patients with hepatocellular carcinoma. Copyright 2008 Massachusetts Medical Society.

Marjorie A. Chan,  Philippa Newell,  Hiromitsu Kumada … (2009)
Hepatocellular carcinoma (HCC) is a highly heterogeneous disease, and prior attempts to develop genomic-based classification for HCC have yielded highly divergent results, indicating difficulty in identifying unified molecular anatomy. We performed a meta-analysis of gene expression profiles in data sets from eight independent patient cohorts across the world. In addition, aiming to establish the real world applicability of a classification system, we profiled 118 formalin-fixed, paraffin-embedded tissues from an additional patient cohort. A total of 603 patients were analyzed, representing the major etiologies of HCC (hepatitis B and C) collected from Western and Eastern countries. We observed three robust HCC subclasses (termed S1, S2, and S3), each correlated with clinical parameters such as tumor size, extent of cellular differentiation, and serum alpha-fetoprotein levels. An analysis of the components of the signatures indicated that S1 reflected aberrant activation of the WNT signaling pathway, S2 was characterized by proliferation as well as MYC and AKT activation, and S3 was associated with hepatocyte differentiation. Functional studies indicated that the WNT pathway activation signature characteristic of S1 tumors was not simply the result of beta-catenin mutation but rather was the result of transforming growth factor-beta activation, thus representing a new mechanism of WNT pathway activation in HCC. These experiments establish the first consensus classification framework for HCC based on gene expression profiles and highlight the power of integrating multiple data sets to define a robust molecular taxonomy of the disease.

P.P. and J.G. contributed equally to this work.