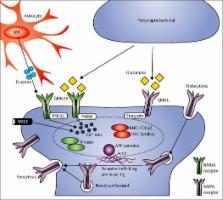 Schizophrenia is a complex, heterogeneous behavioural and cognitive syndrome whose origins appear to lie in genetic and/or environmental disruption of brain development. Dysfunction of dopaminergic neurotransmission appears to contribute to the genesis of psychotic symptoms but the evidence also points to a more widespread and variable involvement of brain areas and circuits. There is emerging evidence that disturbances of synaptic function might underlie abnormalities of neuronal connectivity possibly involving interneurons, but the precise nature, location and timing of these events is uncertain. Current treatment consists largely in the administration of antipsychotic drugs combined with psychological therapies, social support and rehabilitation, but there is a pressing need for more effective treatments and for services to be delivered more effectively. Progress in understanding the disorder has been great in recent years with advances in genomics, epidemiology and neuroscience, and the opportunities for further scientific advance are great: but so are the challenges.

Stephan Ripke,  Benjamin M. Neale,  Aiden Corvin … (2015)
Summary Schizophrenia is a highly heritable disorder. Genetic risk is conferred by a large number of alleles, including common alleles of small effect that might be detected by genome-wide association studies. Here, we report a multi-stage schizophrenia genome-wide association study of up to 36,989 cases and 113,075 controls. We identify 128 independent associations spanning 108 conservatively defined loci that meet genome-wide significance, 83 of which have not been previously reported. Associations were enriched among genes expressed in brain providing biological plausibility for the findings. Many findings have the potential to provide entirely novel insights into aetiology, but associations at DRD2 and multiple genes involved in glutamatergic neurotransmission highlight molecules of known and potential therapeutic relevance to schizophrenia, and are consistent with leading pathophysiological hypotheses. Independent of genes expressed in brain, associations were enriched among genes expressed in tissues that play important roles in immunity, providing support for the hypothesized link between the immune system and schizophrenia.

Haoyi Wang,  Hui Yang,  Chikdu Shivalila … (2013)
Mice carrying mutations in multiple genes are traditionally generated by sequential recombination in embryonic stem cells and/or time-consuming intercrossing of mice with a single mutation. The CRISPR/Cas system has been adapted as an efficient gene-targeting technology with the potential for multiplexed genome editing. We demonstrate that CRISPR/Cas-mediated gene editing allows the simultaneous disruption of five genes (Tet1, 2, 3, Sry, Uty--8 alleles) in mouse embryonic stem (ES) cells with high efficiency. Coinjection of Cas9 mRNA and single-guide RNAs (sgRNAs) targeting Tet1 and Tet2 into zygotes generated mice with biallelic mutations in both genes with an efficiency of 80%. Finally, we show that coinjection of Cas9 mRNA/sgRNAs with mutant oligos generated precise point mutations simultaneously in two target genes. Thus, the CRISPR/Cas system allows the one-step generation of animals carrying mutations in multiple genes, an approach that will greatly accelerate the in vivo study of functionally redundant genes and of epistatic gene interactions. Copyright © 2013 Elsevier Inc. All rights reserved.

Dorothy P Schafer,  Emily Lehrman,  Amanda Kautzman … (2012)
Microglia are the resident CNS immune cells and active surveyors of the extracellular environment. While past work has focused on the role of these cells during disease, recent imaging studies reveal dynamic interactions between microglia and synaptic elements in the healthy brain. Despite these intriguing observations, the precise function of microglia at remodeling synapses and the mechanisms that underlie microglia-synapse interactions remain elusive. In the current study, we demonstrate a role for microglia in activity-dependent synaptic pruning in the postnatal retinogeniculate system. We show that microglia engulf presynaptic inputs during peak retinogeniculate pruning and that engulfment is dependent upon neural activity and the microglia-specific phagocytic signaling pathway, complement receptor 3(CR3)/C3. Furthermore, disrupting microglia-specific CR3/C3 signaling resulted in sustained deficits in synaptic connectivity. These results define a role for microglia during postnatal development and identify underlying mechanisms by which microglia engulf and remodel developing synapses. Copyright © 2012 Elsevier Inc. All rights reserved.