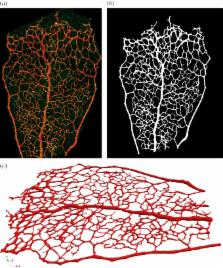 There is currently limited understanding of the role played by haemodynamic forces on the processes governing vascular development. One of many obstacles to be overcome is being able to measure those forces, at the required resolution level, on vessels only a few micrometres thick. In this paper, we present an in silico method for the computation of the haemodynamic forces experienced by murine retinal vasculature (a widely used vascular development animal model) beyond what is measurable experimentally. Our results show that it is possible to reconstruct high-resolution three-dimensional geometrical models directly from samples of retinal vasculature and that the lattice-Boltzmann algorithm can be used to obtain accurate estimates of the haemodynamics in these domains. We generate flow models from samples obtained at postnatal days (P) 5 and 6. Our simulations show important differences between the flow patterns recovered in both cases, including observations of regression occurring in areas where wall shear stress (WSS) gradients exist. We propose two possible mechanisms to account for the observed increase in velocity and WSS between P5 and P6: (i) the measured reduction in typical vessel diameter between both time points and (ii) the reduction in network density triggered by the pruning process. The methodology developed herein is applicable to other biomedical domains where microvasculature can be imaged but experimental flow measurements are unavailable or difficult to obtain.

Kevin C. Johnson,  Aleksander Popel (2005)
Major experimental and theoretical studies on microcirculation and hemorheology are reviewed with the focus on mechanics of blood flow and the vascular wall. Flow of the blood formed elements (red blood cells (RBCs), white blood cells or leukocytes (WBCs) and platelets) in individual arterioles, capillaries and venules, and in microvascular networks is discussed. Mechanical and rheological properties of the formed elements and their interactions with the vascular wall are reviewed. Short-term and long-term regulation of the microvasculature is discussed; the modes of regulation include metabolic, myogenic and shear-stress-dependent mechanisms as well as vascular adaptation such as angiogenesis and vascular remodeling.

Arndt F. Siekmann,  Sally N. Lawson (2007)
Recent evidence indicates that growing blood-vessel sprouts consist of endothelial cells with distinct cell fates and behaviours; however, it is not clear what signals determine these sprout cell characteristics. Here we show that Notch signalling is necessary to restrict angiogenic cell behaviour to tip cells in developing segmental arteries in the zebrafish embryo. In the absence of the Notch signalling component Rbpsuh (recombining binding protein suppressor of hairless) we observed excessive sprouting of segmental arteries, whereas Notch activation suppresses angiogenesis. Through mosaic analysis we find that cells lacking Rbpsuh preferentially localize to the terminal position in developing sprouts. In contrast, cells in which Notch signalling has been activated are excluded from the tip-cell position. In vivo time-lapse analysis reveals that endothelial tip cells undergo a stereotypical pattern of proliferation and migration during sprouting. In the absence of Notch, nearly all sprouting endothelial cells exhibit tip-cell behaviour, leading to excessive numbers of cells within segmental arteries. Furthermore, we find that flt4 (fms-related tyrosine kinase 4, also called vegfr3) is expressed in segmental artery tip cells and becomes ectopically expressed throughout the sprout in the absence of Notch. Loss of flt4 can partially restore normal endothelial cell number in Rbpsuh-deficient segmental arteries. Finally, loss of the Notch ligand dll4 (delta-like 4) also leads to an increased number of endothelial cells within segmental arteries. Together, these studies indicate that proper specification of cell identity, position and behaviour in a developing blood-vessel sprout is required for normal angiogenesis, and implicate the Notch signalling pathway in this process.

Abigail E. Vallance,  Edward Morrisey,  Savita Kurup … (2005)
Macrophages have a critical role in inflammatory and immune responses through their ability to recognize and engulf apoptotic cells. Here we show that macrophages initiate a cell-death programme in target cells by activating the canonical WNT pathway. We show in mice that macrophage WNT7b is a short-range paracrine signal required for WNT-pathway responses and programmed cell death in the vascular endothelial cells of the temporary hyaloid vessels of the developing eye. These findings indicate that macrophages can use WNT ligands to influence cell-fate decisions--including cell death--in adjacent cells, and raise the possibility that they do so in many different cellular contexts.

These authors contributed equally to this study.

© 2014 The Authors. Published by the Royal Society under the terms of the Creative Commons Attribution License http://creativecommons.org/licenses/by/3.0/, which permits unrestricted use, provided the original author and source are credited.