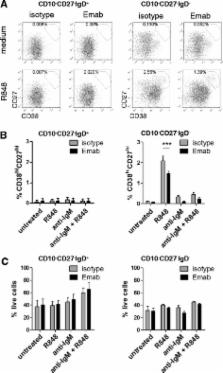 Abnormal B-cell activation is implicated in the pathogenesis of autoimmune diseases, including systemic lupus erythematosus (SLE). The B-cell surface molecule CD22, which regulates activation through the B-cell receptor (BCR), is a potential target for inhibiting pathogenic B cells; however, the regulatory functions of CD22 remain poorly understood. In this study, we determined how targeting of CD22 with epratuzumab (Emab), a humanized anti-CD22 IgG1 monoclonal antibody, affects the activation of human B-cell subsets in response to Toll-like receptor 7 (TLR7) and BCR engagement.

B-cell subsets were isolated from human tonsils and stimulated with F(ab′) 2 anti-human IgM and/or the TLR7 agonist R848 in the presence of Emab or a human IgG1 isotype control. Changes in mRNA levels of genes associated with B-cell activation and differentiation were analyzed by quantitative PCR. Cytokine production was measured by ELISA. Cell proliferation, survival, and differentiation were assessed by flow cytometry.

Pretreatment of phenotypically naïve CD19 +CD10 –CD27 – cells with Emab led to a significant increase in IL-10 expression, and in some but not all patient samples to a reduction of IL-6 production in response to TLR7 stimulation alone or in combination with anti-IgM. Emab selectively inhibited the expression of PRDM1, the gene encoding B-lymphocyte-induced maturation protein 1 (Blimp-1) in activated CD10 –CD27 – B cells. CD10 –CD27 –IgD – cells were highly responsive to stimulation through TLR7 as evidenced by the appearance of blasting CD27 hiCD38 hi cells. Emab significantly inhibited the activation and differentiation of CD10 –CD27 –IgD – B cells into plasma cells.

Emab can both regulate cytokine expression and block Blimp1-dependent B-cell differentiation, although the effects of Emab may depend on the stage of B-cell development or activation. In addition, Emab inhibits the activation of CD27 –IgD – tonsillar cells, which correspond to so-called double-negative memory B cells, known to be increased in SLE patients with more active disease. These data may be relevant to the therapeutic effect of Emab in vivo via modulation of the production of pro-inflammatory and anti-inflammatory cytokines by B cells. Because Blimp-1 is required by B cells to mature into antibody-producing cells, inhibition of Blimp1 may reduce autoantibody production.

Autoreactive B cell responses to RNA-related antigens due to TLR7 gene duplication.

Prapaporn Pisitkun,  Tatyana Tarasenko,  Silvia Bolland … (2006)
Antibodies against nuclear self-antigens are characteristic of systemic autoimmunity, although mechanisms promoting their generation and selection are unclear. Here, we report that B cells containing the Y-linked autoimmune accelerator (Yaa) locus are intrinsically biased toward nucleolar antigens because of increased expression of TLR7, a single-stranded RNA-binding innate immune receptor. The TLR7 gene is duplicated in Yaa mice because of a 4-Megabase expansion of the pseudoautosomal region. These results reveal high divergence in mouse Y chromosomes and represent a good example of gene copy number qualitatively altering a polygenic disease manifestation.

Christina Lau,  Courtney Broughton,  Abigail S. Tabor … (2005)
Previous studies (Leadbetter, E.A., I.R. Rifkin, A.H. Hohlbaum, B. Beaudette, M.J. Shlomchik, and A. Marshak-Rothstein. 2002. Nature. 416:603–607; Viglianti, G.A., C.M. Lau, T.M. Hanley, B.A. Miko, M.J. Shlomchik, and A. Marshak-Rothstein. 2003. Immunity. 19:837–847) established the unique capacity of DNA and DNA-associated autoantigens to activate autoreactive B cells via sequential engagement of the B cell antigen receptor (BCR) and Toll-like receptor (TLR) 9. We demonstrate that this two-receptor paradigm can be extended to the BCR/TLR7 activation of autoreactive B cells by RNA and RNA-associated autoantigens. These data implicate TLR recognition of endogenous ligands in the response to both DNA- and RNA-associated autoantigens. Importantly, the response to RNA-associated autoantigens was markedly enhanced by IFN-α, a cytokine strongly linked to disease progression in patients with systemic lupus erythematosus (SLE). As further evidence that TLRs play a key role in autoantibody responses in SLE, we found that autoimmune-prone mice, lacking the TLR adaptor protein MyD88, had markedly reduced chromatin, Sm, and rheumatoid factor autoantibody titers.

Ying Li,  Danielle T. Avery,  S. Ma … (2007)
Differentiation of B cells into Ig-secreting cells (ISC) is critical for the generation of protective humoral immune responses. Because of the important role played by secreted Ig in host protection against infection, it is necessary to identify molecules that control B cell differentiation. Recently, IL-21 was reported to generate ISC from activated human B cells. In this study, we examined the effects of IL-21 on the differentiation of all human mature B cell subsets--neonatal, transitional, naive, germinal center, IgM-memory, and isotype-switched memory cells--into ISC and compared its efficacy to that of IL-10, a well-known mediator of human B cell differentiation. IL-21 rapidly induced the generation of ISC and the secretion of vast quantities IgM, IgG and IgA from all of these B cell subsets. Its effect exceeded that of IL-10 by up to 100-fold, highlighting the potency of IL-21 as a B cell differentiation factor. Strikingly, IL-4 suppressed the stimulatory effects of IL-21 on naive B cells by reducing the expression of B-lymphocyte induced maturation protein-1 (Blimp-1). In contrast, memory B cells were resistant to the inhibitory effects of IL-4. Finally, the ability of human tonsillar CD4+CXCR5+CCR7- T follicular helper (TFH) cells, known to be a rich source of IL-21, to induce the differentiation of autologous B cells into ISC was mediated by the production of IL-21. These findings suggest that IL-21 produced by TFH cells during the primary as well as the subsequent responses to T cell-dependent Ag makes a major contribution to eliciting and maintaining long-lived humoral immunity.