Emerging and Re-emerging Pathogens and Diseases, and Health Consequences of a Changing Climate 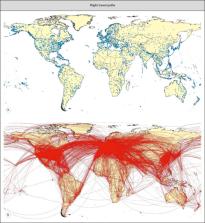 Jonathan A. Patz,  Diarmid Campbell-Lendrum,  A. Foley … (2005)
The World Health Organisation estimates that the warming and precipitation trends due to anthropogenic climate change of the past 30 years already claim over 150,000 lives annually. Many prevalent human diseases are linked to climate fluctuations, from cardiovascular mortality and respiratory illnesses due to heatwaves, to altered transmission of infectious diseases and malnutrition from crop failures. Uncertainty remains in attributing the expansion or resurgence of diseases to climate change, owing to lack of long-term, high-quality data sets as well as the large influence of socio-economic factors and changes in immunity and drug resistance. Here we review the growing evidence that climate-health relationships pose increasing health risks under future projections of climate change and that the warming trend over recent decades has already contributed to increased morbidity and mortality in many regions of the world. Potentially vulnerable regions include the temperate latitudes, which are projected to warm disproportionately, the regions around the Pacific and Indian oceans that are currently subjected to large rainfall variability due to the El Niño/Southern Oscillation sub-Saharan Africa and sprawling cities where the urban heat island effect could intensify extreme climatic events.

Sandy Finkelstein,  Susan M Poutanen,  Bonnie Henry … (2003)
Severe acute respiratory syndrome (SARS) is a condition of unknown cause that has recently been recognized in patients in Asia, North America, and Europe. This report summarizes the initial epidemiologic findings, clinical description, and diagnostic findings that followed the identification of SARS in Canada. SARS was first identified in Canada in early March 2003. We collected epidemiologic, clinical, and diagnostic data from each of the first 10 cases prospectively as they were identified. Specimens from all cases were sent to local, provincial, national, and international laboratories for studies to identify an etiologic agent. The patients ranged from 24 to 78 years old; 60 percent were men. Transmission occurred only after close contact. The most common presenting symptoms were fever (in 100 percent of cases) and malaise (in 70 percent), followed by nonproductive cough (in 100 percent) and dyspnea (in 80 percent) associated with infiltrates on chest radiography (in 100 percent). Lymphopenia (in 89 percent of those for whom data were available), elevated lactate dehydrogenase levels (in 80 percent), elevated aspartate aminotransferase levels (in 78 percent), and elevated creatinine kinase levels (in 56 percent) were common. Empirical therapy most commonly included antibiotics, oseltamivir, and intravenous ribavirin. Mechanical ventilation was required in five patients. Three patients died, and five have had clinical improvement. The results of laboratory investigations were negative or not clinically significant except for the amplification of human metapneumovirus from respiratory specimens from five of nine patients and the isolation and amplification of a novel coronavirus from five of nine patients. In four cases both pathogens were isolated. SARS is a condition associated with substantial morbidity and mortality. It appears to be of viral origin, with patterns suggesting droplet or contact transmission. The role of human metapneumovirus, a novel coronavirus, or both requires further investigation. Copyright 2003 Massachusetts Medical Society

Factors in the emergence of infectious diseases.

S. S. Morse (1995)
"Emerging" infectious diseases can be defined as infections that have newly appeared in a population or have existed but are rapidly increasing in incidence or geographic range. Among recent examples are HIV/AIDS, hantavirus pulmonary syndrome, Lyme disease, and hemolytic uremic syndrome (a foodborne infection caused by certain strains of Escherichia coli). Specific factors precipitating disease emergence can be identified in virtually all cases. These include ecological, environmental, or demographic factors that place people at increased contact with a previously unfamiliar microbe or its natural host or promote dissemination. These factors are increasing in prevalence; this increase, together with the ongoing evolution of viral and microbial variants and selection for drug resistance, suggests that infections will continue to emerge and probably increase and emphasizes the urgent need for effective surveillance and control. Dr. David Satcher's article and this overview inaugurate Perspectives, a regular section in this journal intended to present and develop unifying concepts and strategies for considering emerging infections and their underlying factors. The editors welcome, as contributions to the Perspectives section, overviews, syntheses, and case studies that shed light on how and why infections emerge, and how they may be anticipated and prevented.