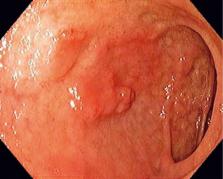 To determine the clinical features associated with advanced duodenal and ampullary adenomas in familial adenomatous polyposis. Secondarily, we describe the prevalence and clinical significance of jejunal polyposis.

This is a single center, prospective study of 62 patients with familial adenomatous polyposis. Duodenal polyposis was classified according to Spigelman and ampullary adenomas were identified. Patients with Spigelman III and IV duodenal polyposis underwent balloon assisted enteroscopy. Predefined groups according to Spigelman and presence or not of ampullary adenomas were related to the clinical variables: gender, age, family history of familial adenomatous polyposis, type of colorectal surgery, and type of colorectal polyposis.

Advanced duodenal polyposis was present in 13 patients (21 %; 9 male) at a mean age of 37.61 ± 13.9 years. There was a statistically significant association between family history of the disease and groups according to Spigelman ( P  = 0.03). Seven unrelated patients (6 male) presented ampullary adenomas at a mean age of 36.14 ± 14.2 years. The association between ampullary adenomas and extraintestinal manifestations was statistically significant in multivariate analysis ( P  = 0.009). Five endoscopic types of non-ampullary adenoma were identified, showing that lesions larger than 10 mm or with a central depression presented foci of high grade dysplasia. Among 28 patients in 12 different families, a similar Spigelman score was identified; 10/12 patients (83.3 %) who underwent enteroscopy presented small tubular adenomas with low grade dysplasia in the proximal jejunum.

Advanced duodenal polyposis phenotype may be predictable from disease severity in a first-degree relative. Ampullary adenomas were independently associated with the presence of extraintestinal manifestations.

R Schlemper (2000)
Use of the conventional Western and Japanese classification systems of gastrointestinal epithelial neoplasia results in large differences among pathologists in the diagnosis of oesophageal, gastric, and colorectal neoplastic lesions. To develop common worldwide terminology for gastrointestinal epithelial neoplasia. Thirty one pathologists from 12 countries reviewed 35 gastric, 20 colorectal, and 21 oesophageal biopsy and resection specimens. The extent of diagnostic agreement between those with Western and Japanese viewpoints was assessed by kappa statistics. The pathologists met in Vienna to discuss the results and to develop a new consensus terminology. The large differences between the conventional Western and Japanese diagnoses were confirmed (percentage of specimens for which there was agreement and kappa values: 37% and 0.16 for gastric; 45% and 0.27 for colorectal; and 14% and 0.01 for oesophageal lesions). There was much better agreement among pathologists (71% and 0.55 for gastric; 65% and 0.47 for colorectal; and 62% and 0.31 for oesophageal lesions) when the original assessments of the specimens were regrouped into the categories of the proposed Vienna classification of gastrointestinal epithelial neoplasia: (1) negative for neoplasia/dysplasia, (2) indefinite for neoplasia/dysplasia, (3) non-invasive low grade neoplasia (low grade adenoma/dysplasia), (4) non-invasive high grade neoplasia (high grade adenoma/dysplasia, non-invasive carcinoma and suspicion of invasive carcinoma), and (5) invasive neoplasia (intramucosal carcinoma, submucosal carcinoma or beyond). The differences between Western and Japanese pathologists in the diagnostic classification of gastrointestinal epithelial neoplastic lesions can be resolved largely by adopting the proposed terminology, which is based on cytological and architectural severity and invasion status.

Guidelines for the clinical management of familial adenomatous polyposis (FAP).

L Renkonen-Sinisalo,  Hans F A Vasen,  T Myrhøi … (2008)
Familial adenomatous polyposis (FAP) is a well-described inherited syndrome, which is responsible for <1% of all colorectal cancer (CRC) cases. The syndrome is characterised by the development of hundreds to thousands of adenomas in the colorectum. Almost all patients will develop CRC if they are not identified and treated at an early stage. The syndrome is inherited as an autosomal dominant trait and caused by mutations in the APC gene. Recently, a second gene has been identified that also gives rise to colonic adenomatous polyposis, although the phenotype is less severe than typical FAP. The gene is the MUTYH gene and the inheritance is autosomal recessive. In April 2006 and February 2007, a workshop was organised in Mallorca by European experts on hereditary gastrointestinal cancer aiming to establish guidelines for the clinical management of FAP and to initiate collaborative studies. Thirty-one experts from nine European countries participated in these workshops. Prior to the meeting, various participants examined the most important management issues according to the latest publications. A systematic literature search using Pubmed and reference lists of retrieved articles, and manual searches of relevant articles, was performed. During the workshop, all recommendations were discussed in detail. Because most of the studies that form the basis for the recommendations were descriptive and/or retrospective in nature, many of them were based on expert opinion. The guidelines described herein may be helpful in the appropriate management of FAP families. In order to improve the care of these families further, prospective controlled studies should be undertaken.

Amanda C de C Williams,  P Domizio,  I Talbot … (1989)
102 patients with familial adenomatous polyposis underwent upper gastrointestinal endoscopy as a screening test for gastroduodenal adenomas. 100 had duodenal abnormalities (dysplasia in 94, and hyperplasia in 6), usually in the second and third parts of the duodenum (91%). The periampullary area was abnormal in 87 of 97 patients who had a biopsy specimen taken from this site (dysplasia 72, hyperplasia 13, and inflammation 2). By contrast, gastric dysplasia was found in only 6 patients. Classification of duodenal polyposis on a 5-grade scale (stages 0-IV), based on polyp number, size, histology, and severity of dysplasia, showed that 11 had stage IV disease: these patients are at greatest risk of malignant change and require close surveillance. The pattern of dysplasia observed in the upper gastrointestinal tract resembled the pattern of mucosal exposure to bile.