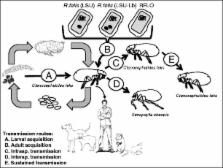 Rickettsia felis is an emerging insect-borne rickettsial pathogen and the causative agent of flea-borne spotted fever. First described as a human pathogen from the USA in 1991, R. felis is now identified throughout the world and considered a common cause of fever in Africa. The cosmopolitan distribution of this pathogen is credited to the equally widespread occurrence of cat fleas ( Ctenocephalides felis), the primary vector and reservoir of R. felis. Although R. felis is a relatively new member of the pathogenic Rickettsia, limited knowledge of basic R. felis biology continues to hinder research progression of this unique bacterium. This is a comprehensive review examining what is known and unknown relative to R. felis transmission biology, epidemiology of the disease, and genetics, with an insight into areas of needed investigation.

Joseph J. Gillespie,  Magda S. Beier,  M. Sayeedur Rahman … (2007)
Background The genome sequence of Rickettsia felis revealed a number of rickettsial genetic anomalies that likely contribute not only to a large genome size relative to other rickettsiae, but also to phenotypic oddities that have confounded the categorization of R. felis as either typhus group (TG) or spotted fever group (SFG) rickettsiae. Most intriguing was the first report from rickettsiae of a conjugative plasmid (pRF) that contains 68 putative open reading frames, several of which are predicted to encode proteins with high similarity to conjugative machinery in other plasmid-containing bacteria. Methodology/Principal Findings Using phylogeny estimation, we determined the mode of inheritance of pRF genes relative to conserved rickettsial chromosomal genes. Phylogenies of chromosomal genes were in agreement with other published rickettsial trees. However, phylogenies including pRF genes yielded different topologies and suggest a close relationship between pRF and ancestral group (AG) rickettsiae, including the recently completed genome of R. bellii str. RML369-C. This relatedness is further supported by the distribution of pRF genes across other rickettsiae, as 10 pRF genes (or inactive derivatives) also occur in AG (but not SFG) rickettsiae, with five of these genes characteristic of typical plasmids. Detailed characterization of pRF genes resulted in two novel findings: the identification of oriV and replication termination regions, and the likelihood that a second proposed plasmid, pRFδ, is an artifact of the original genome assembly. Conclusion/Significance Altogether, we propose a new rickettsial classification scheme with the addition of a fourth lineage, transitional group (TRG) rickettsiae, that is unique from TG and SFG rickettsiae and harbors genes from possible exchanges with AG rickettsiae via conjugation. We offer insight into the evolution of a plastic plasmid system in rickettsiae, including the role plasmids may have played in the acquirement of virulence traits in pathogenic strains, and the likely origin of plasmids within the rickettsial tree.