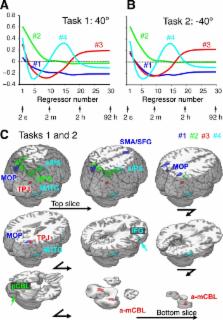 Recent computational and behavioral studies suggest that motor adaptation results from the update of multiple memories with different timescales. Here, we designed a model-based functional magnetic resonance imaging (fMRI) experiment in which subjects adapted to two opposing visuomotor rotations. A computational model of motor adaptation with multiple memories was fitted to the behavioral data to generate time-varying regressors of brain activity. We identified regional specificity to timescales: in particular, the activity in the inferior parietal region and in the anterior-medial cerebellum was associated with memories for intermediate and long timescales, respectively. A sparse singular value decomposition analysis of variability in specificities to timescales over the brain identified four components, two fast, one middle, and one slow, each associated with different brain networks. Finally, a multivariate decoding analysis showed that activity patterns in the anterior-medial cerebellum progressively represented the two rotations. Our results support the existence of brain regions associated with multiple timescales in adaptation and a role of the cerebellum in storing multiple internal models.

Motor adaptation, a form of motor learning in which motor commands are modified to compensate for disturbances in the external environment, usually proceeds at a rapid pace initially and is then followed by more gradual adjustments. This suggests that at least two learning processes are involved, but little is known about how many distinct memories the brain actually updates during motor adaptation. In addition, it is unclear whether these putative multiple motor memories reside within a single neural system that encompasses different timescales or in qualitatively distinct neural systems. We addressed these issues using a model-based functional imaging approach in which we first used behavioral data to derive a large number of possible memory “states,” each with different dynamics, and then correlated these memory states with neural activities. We identified four components: two fast, one intermediate, and one slow, each associated with different brain networks. In particular, areas in the prefrontal and parietal lobes and the posterior part of the cerebellum were associated with formation of memories for short timescales. By contrast, the inferior parietal region and the anterior-medial cerebellum were associated with formation of memories for intermediate and long timescales, respectively.

Jörn Diedrichsen,  Daniel Wolpert,  J. Randall Flanagan (2011)
The exploits of Martina Navratilova and Roger Federer represent the pinnacle of motor learning. However, when considering the range and complexity of the processes that are involved in motor learning, even the mere mortals among us exhibit abilities that are impressive. We exercise these abilities when taking up new activities - whether it is snowboarding or ballroom dancing - but also engage in substantial motor learning on a daily basis as we adapt to changes in our environment, manipulate new objects and refine existing skills. Here we review recent research in human motor learning with an emphasis on the computational mechanisms that are involved.

Rafael Malach,  Kalanit Grill-Spector (2003)
The discovery and analysis of cortical visual areas is a major accomplishment of visual neuroscience. In the past decade the use of noninvasive functional imaging, particularly functional magnetic resonance imaging (fMRI), has dramatically increased our detailed knowledge of the functional organization of the human visual cortex and its relation to visual perception. The fMRI method offers a major advantage over other techniques applied in neuroscience by providing a large-scale neuroanatomical perspective that stems from its ability to image the entire brain essentially at once. This bird's eye view has the potential to reveal large-scale principles within the very complex plethora of visual areas. Thus, it could arrange the entire constellation of human visual areas in a unified functional organizational framework. Here we review recent findings and methods employed to uncover the functional properties of the human visual cortex focusing on two themes: functional specialization and hierarchical processing.

M. Kawato,  T Tamada,  B Pütz … (2000)
Theories of motor control postulate that the brain uses internal models of the body to control movements accurately. Internal models are neural representations of how, for instance, the arm would respond to a neural command, given its current position and velocity. Previous studies have shown that the cerebellar cortex can acquire internal models through motor learning. Because the human cerebellum is involved in higher cognitive function as well as in motor control, we propose a coherent computational theory in which the phylogenetically newer part of the cerebellum similarly acquires internal models of objects in the external world. While human subjects learned to use a new tool (a computer mouse with a novel rotational transformation), cerebellar activity was measured by functional magnetic resonance imaging. As predicted by our theory, two types of activity were observed. One was spread over wide areas of the cerebellum and was precisely proportional to the error signal that guides the acquisition of internal models during learning. The other was confined to the area near the posterior superior fissure and remained even after learning, when the error levels had been equalized, thus probably reflecting an acquired internal model of the new tool.

‡ These authors are joint senior authors on this work.

Data Availability All relevant data are within the paper and its Supporting Information files.
Data availability:
ScienceOpen disciplines: Life sciences