Cholangiocytes and the environment in primary sclerosing cholangitis: where is the link? 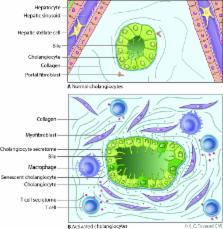 David Ellinghaus,  Luke Jostins,  Sarah L Spain … (2016)
We simultaneously investigated the genetic landscape of ankylosing spondylitis, Crohn's disease, psoriasis, primary sclerosing cholangitis and ulcerative colitis to investigate pleiotropy and the relationship between these clinically related diseases. Using high-density genotype data from more than 86,000 individuals of European-ancestry we identified 244 independent multi-disease signals including 27 novel genome-wide significant susceptibility loci and 3 unreported shared risk loci. Complex pleiotropy was supported when contrasting multi-disease signals with expression data sets from human, rat and mouse, and epigenetic and expressed enhancer profiles. The comorbidities among the five immune diseases were best explained by biological pleiotropy rather than heterogeneity (a subgroup of cases that is genetically identical to another disease, possibly due to diagnostic misclassification, molecular subtypes, or excessive comorbidity). In particular, the strong comorbidity between primary sclerosing cholangitis and inflammatory bowel disease is likely the result of a unique disease, which is genetically distinct from classical inflammatory bowel disease phenotypes.

Sequence-based identification of microbial pathogens: a reconsideration of Koch's postulates.

David Relman,  David Fredricks (1995)
Over 100 years ago, Robert Koch introduced his ideas about how to prove a causal relationship between a microorganism and a disease. Koch's postulates created a scientific standard for causal evidence that established the credibility of microbes as pathogens and led to the development of modern microbiology. In more recent times, Koch's postulates have evolved to accommodate a broader understanding of the host-parasite relationship as well as experimental advances. Techniques such as in situ hybridization, PCR, and representational difference analysis reveal previously uncharacterized, fastidious or uncultivated, microbial pathogens that resist the application of Koch's original postulates, but they also provide new approaches for proving disease causation. In particular, the increasing reliance on sequence-based methods for microbial identification requires a reassessment of the original postulates and the rationale that guided Koch and later revisionists. Recent investigations of Whipple's disease, human ehrlichiosis, hepatitis C, hantavirus pulmonary syndrome, and Kaposi's sarcoma illustrate some of these issues. A set of molecular guidelines for establishing disease causation with sequence-based technology is proposed, and the importance of the scientific concordance of evidence in supporting causal associations is emphasized.