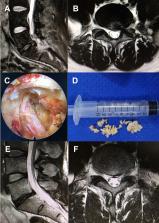 The purpose of this study was to compare the outcomes between percutaneous endoscopic lumbar discectomy (PELD) and minimally invasive transforaminal lumbar interbody fusion (MIS-TLIF) for the revision surgery for recurrent lumbar disc herniation (rLDH) after PELD surgery.

A total of 46 patients with rLDH were retrospectively assessed in this study. All the patients had received a PELD in Peking University First Hospital between January 2015 and June 2019, before they underwent a revision surgery by either PELD (n=24) or MIS-TLIF (n=22). The preoperative data, perioperative conditions, complications, recurrence condition, and clinical outcomes of the patients were compared between the two groups.

Compared to the MIS-TLIF group, the PELD group had significantly shorter operative time, less intraoperative hemorrhage, and shorter postoperative hospitalization, but higher recurrence rate ( P<0.05). Complication rates were comparable between the two groups. Both groups had satisfactory clinical outcomes at a 12-month follow-up after the revision surgery. The PELD group also showed significantly lower visual analog scale (VAS) scores of back pain and Oswestry disability index (ODI) in one month after the revision surgery, whereas the difference was not detectable at six- and 12-month follow-ups.

Both PELD and MIS-TLIF are effective as a revision surgery for rLDH after primary PELD. PELD is superior to MIS-TLIF in terms of operative time amount of intraoperative hemorrhage and postoperative hospitalization. However, its higher postoperative recurrence rate must be considered and patients should be well informed, when making a decision between the two surgical approaches.

Transforaminal posterolateral endoscopic discectomy with or without the combination of a low-dose chymopapain: a prospective randomized study in 280 consecutive cases.

T Hoogland,  A. Ramirez,  Boris Miklitz … (2006)
A prospective randomized study involving 280 consecutive cases of lumbar disc herniation managed either by an endoscopic discectomy alone or an endoscopic discectomy combined with an intradiscal injection of a low dose (1000 U) of chymopapain. To compare outcome, complications, and reherniations of both techniques. Despite a low complication rate, posterolateral endoscopic nucleotomy has made a lengthy evolution because of an assumed limited indication. Chemonucleolysis, however, proven to be safe and effective, has not continued to be accepted by the majority in the spinal community as microdiscectomy is considered to be more reliable. A total of 280 consecutive patients with a primary herniated, including sequestrated, lumbar disc with predominant leg pain, was randomized. A clinical follow-up was performed at 3 months, and at 1 and 2 years after the index operation with an extensive questionnaire, including the visual analog scale for pain and the MacNab criteria. The cohort integrity at 3 months was 100%, at 1 year 96%, and at 2 years 92%. At the 3-month evaluation, only minor complications were registered. At 1-year postoperatively, group 1 (endoscopy alone) had a recurrence rate of 6.9% compared to group 2 (the combination therapy), with a recurrence rate of 1.6%, which was a statistically significant difference in favor of the combination therapy (P = 0045). At the 2-year follow-up, group 1 reported that 85.4% had an excellent or good result, 6.9% a fair result, and 7.7% were not satisfied. At the 2-year follow-up, group 2 reported that 93.3% had an excellent or good result, 2.5% a fair result, and 4.2% were not satisfied. This outcome was statistically significant in favor of the group including chymopapain. There were no infections or patients with any form of permanent iatrogenic nerve damage, and no patients had a major complication. A high percentage of patient satisfaction could be obtained with a posterior lateral endoscopic discectomy for lumbar disc herniation, and a statistically significant improvement of the results was obtained when an intradiscal injection of 1000 U of chymopapain was added. There was a low recurrence rate with no major complications. The method can be applied in any type of lumbar disc herniation, including the L5-S1 level.