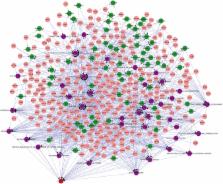 Identifying the occurrence mechanism of drug-induced side effects (SEs) is critical for design of drug target and new drug development. The expression of genes in biological processes is regulated by transcription factors(TFs) and/or microRNAs. Most of previous studies were focused on a single level of gene or gene sets, while studies about regulatory relationships of TFs, miRNAs and biological processes are very rare. Discovering the complex regulating relations among TFs, gene sets and miRNAs will be helpful for researchers to get a more comprehensive understanding about the mechanism of side reaction. In this study, a framework was proposed to construct the relationship network of gene sets, miRNAs and TFs involved in side effects. Through the construction of this network, the potential complex regulatory relationship in the occurrence process of the side effects was reproduced. The SE-gene set network was employed to characterize the significant regulatory SE-gene set interaction and molecular basis of accompanied side effects. A total of 117 side effects complex modules including four types of regulating patterns were obtained from the SE-gene sets-miRNA/TF complex regulatory network. In addition, two cases were used to validate the complex regulatory modules which could more comprehensively interpret occurrence mechanism of side effects.

Feifei Xiao,  Zhixiang Zuo,  Guoshuai Cai … (2009)
MicroRNAs (miRNAs) are an important class of small noncoding RNAs capable of regulating other genes’ expression. Much progress has been made in computational target prediction of miRNAs in recent years. More than 10 miRNA target prediction programs have been established, yet, the prediction of animal miRNA targets remains a challenging task. We have developed miRecords, an integrated resource for animal miRNA–target interactions. The Validated Targets component of this resource hosts a large, high-quality manually curated database of experimentally validated miRNA–target interactions with systematic documentation of experimental support for each interaction. The current release of this database includes 1135 records of validated miRNA–target interactions between 301 miRNAs and 902 target genes in seven animal species. The Predicted Targets component of miRecords stores predicted miRNA targets produced by 11 established miRNA target prediction programs. miRecords is expected to serve as a useful resource not only for experimental miRNA researchers, but also for informatics scientists developing the next-generation miRNA target prediction programs. The miRecords is available at http://miRecords.umn.edu/miRecords.

Missing pieces in the NF-kappaB puzzle.

Sankar Kumar Ghosh,  Michael Karin (2002)
The regulation of the transcription factor NF-kappaB activity occurs at several levels including controlled cytoplasmic-nuclear shuttling and modulation of its transcriptional activity. A critical component in NF-kappaB regulation is the IkappaB kinase (IKK) complex. This review is focused on recent progress as well as unanswered questions regarding the regulation and function of NF-kappaB and IKK.