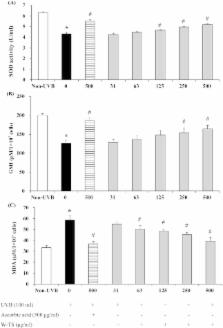 Publisher: The Korean Society of Toxicology

Exposure of cells to ultraviolet B (UVB) radiation can induce production of free radicals and reactive oxygen species (ROS), which damage cellular components. In addition, these agents can stimulate the expression of matrix metalloproteinase (MMP) and decrease collagen synthesis in human skin cells. In this study, we examined the anti-photoaging effects of extracts of Tetraselmis suecica (W-TS). W-TS showed the strongest scavenging activity against 2,2-difenyl-1-picrylhydrazyl (DPPH) and peroxyl radicals, followed by superoxide anions from the xanthine/xanthine oxidase system. We observed that the levels of both intracellular ROS and lipid peroxidation significantly increased in UVB-irradiated human skin fibroblast cells. Furthermore, the activities of enzymatic antioxidants (e.g., superoxide dismutase) and the levels of non-enzymatic antioxidants (e.g., glutathione) significantly decreased in cells. However, W-TS pretreatment, at the maximum tested concentration, significantly decreased intracellular ROS and malondialdehyde (MDA) levels, and increased superoxide dismutase and glutathione levels in the cells. At this same concentration, W-TS did not show cytotoxicity. Type 1 procollagen and MMP-1 released were quantified using RT-PCR techniques. The results showed that W-TS protected type 1 procollagen against UVBinduced depletion in fibroblast cells in a dose-dependent manner via inhibition of UVB-induced MMP-1. Taken together, the results of the study suggest that W-TS effectively inhibits UVB-induced photoaging in skin fibroblasts by its strong anti-oxidant ability.

The chemistry and antioxidant properties of tocopherols and tocotrienols.

L Appelqvist,  Nermeen Kamal (1996)
This article is a review of the fundamental chemistry of the tocopherols and tocotrienols relevant to their antioxidant action. Despite the general agreement that alpha-tocopherol is the most efficient antioxidant and vitamin E homologue in vivo, there was always a considerable discrepancy in its "absolute" and "relative" antioxidant effectiveness in vitro, especially when compared to gamma-tocopherol. Many chemical, physical, biochemical, physicochemical, and other factors seem responsible for the observed discrepancy between the relative antioxidant potencies of the tocopherols in vivo and in vitro. This paper aims at highlighting some possible reasons for the observed differences between the tocopherols (alpha-, beta-, gamma-, and delta-) in relation to their interactions with the important chemical species involved in lipid peroxidation, specifically trace metal ions, singlet oxygen, nitrogen oxides, and antioxidant synergists. Although literature reports related to the chemistry of the tocotrienols are quite meager, they also were included in the discussion in virtue of their structural and functional resemblance to the tocopherols.

S Datta,  Q. Wang,  Heidi Fisher … (1996)
Damage to skin collagen and elastin (extracellular matrix) is the hallmark of long-term exposure to solar ultraviolet irradiation, and is believed to be responsible for the wrinkled appearance of sun-exposed skin. We report here that matrix-degrading metalloproteinase messenger RNAs, proteins and activities are induced in human skin in vivo within hours of exposure to ultraviolet-B irradiation (UVB). Induction of metalloproteinase proteins and activities occurred at UVB doses well below those that cause skin reddening. Within minutes, low-dose UVB upregulated the transcription factors AP-1 and NF-kappa B, which are known to be stimulators of metalloproteinase genes. All-trans retinoic acid, which transrepresses AP-1 (ref. 8), applied before irradiation with UVB, substantially reduced AP-1 and metalloproteinase induction. We propose that elevated metalloproteinases, resulting from activation of AP-1 and NF-kappa B by low-dose solar irradiation, degrade collagen and elastin in skin. Such damage, if imperfectly repaired, would result in solar scars, which through accumulation from a lifetime of repeated low-dose sunlight exposure could cause premature skin ageing (photoageing).

Matthew P Vincenti,  Constance Brinckerhoff (2001)
Matrix metalloproteinase (MMP)-1, MMP-8 and MMP-13 are interstitial collagenases that degrade type II collagen in cartilage; this is a committed step in the progression of rheumatoid arthritis and osteoarthritis. Of these enzymes, the expression of MMP-1 and MMP-13 is substantially increased in response to IL-1 and tumor necrosis factor-α, and elevated levels of these collagenases are observed in arthritic tissues. Therefore, cytokine-mediated MMP-1 and MMP-13 gene regulation is an important issue in arthritis research. In this review, we discuss current models of MMP-1 and MMP-13 transcriptional regulation, with a focus on signaling intermediates and transcription factors that may be future targets for the development of new arthritis drugs.

This is an Open-Access article distributed under the terms of the Creative Commons Attribution Non-Commercial License ( http://creativecommons.org/licenses/by-nc/3.0) which permits unrestricted non-commercial use, distribution, and reproduction in any medium, provided the original work is properly cited.