p53 and its mutants in tumor cell migration and invasion 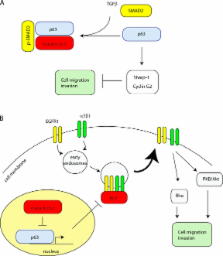 In about half of all human cancers, the tumor suppressor p53 protein is either lost or mutated, frequently resulting in the expression of a transcriptionally inactive mutant p53 protein. Loss of p53 function is well known to influence cell cycle checkpoint controls and apoptosis. But it is now clear that p53 regulates other key stages of metastatic progression, such as cell migration and invasion. Moreover, recent data suggests that expression of mutant p53 is not the equivalent of p53 loss, and that mutant p53s can acquire new functions to drive cell migration, invasion, and metastasis, in part by interfering with p63 function.

Y Haupt, R Maya, A Kazaz … (1997)
The p53 tumour-suppressor protein exerts antiproliferative effects, including growth arrest and apoptosis, in response to various types of stress. The activity of p53 is abrogated by mutations that occur frequently in tumours, as well as by several viral and cellular proteins. The Mdm2 oncoprotein is a potent inhibitor of p53. Mdm2 binds the transcriptional activation domain of p53 and blocks its ability to regulate target genes and to exert antiproliferative effects. On the other hand, p53 activates the expression of the mdm2 gene in an autoregulatory feedback loop. The interval between p53 activation and consequent Mdm2 accumulation defines a time window during which p53 exerts its effects. We now report that Mdm2 also promotes the rapid degradation of p53 under conditions in which p53 is otherwise stabilized. This effect of Mdm2 requires binding of p53; moreover, a small domain of p53, encompassing the Mdm2-binding site, confers Mdm2-dependent detstabilization upon heterologous proteins. Raised amounts of Mdm2 strongly repress mutant p53 accumulation in tumour-derived cells. During recovery from DNA damage, maximal Mdm2 induction coincides with rapid p53 loss. We propose that the Mdm2-promoted degradation of p53 provides a new mechanism to ensure effective termination of the p53 signal.

Kenneth P Olive, David Tuveson, Zachary Ruhe … (2004)
The p53 tumor suppressor gene is commonly altered in human tumors, predominantly through missense mutations that result in accumulation of mutant p53 protein. These mutations may confer dominant-negative or gain-of-function properties to p53. To ascertain the physiological effects of p53 point mutation, the structural mutant p53R172H and the contact mutant p53R270H (codons 175 and 273 in humans) were engineered into the endogenous p53 locus in mice. p53R270H/+ and p53R172H/+ mice are models of Li-Fraumeni Syndrome; they developed allele-specific tumor spectra distinct from p53+/- mice. In addition, p53R270H/- and p53R172H/- mice developed novel tumors compared to p53-/- mice, including a variety of carcinomas and more frequent endothelial tumors. Dominant effects that varied by allele and function were observed in primary cells derived from p53R270H/+ and p53R172H/+ mice. These results demonstrate that point mutant p53 alleles expressed under physiological control have enhanced oncogenic potential beyond the simple loss of p53 function.

Gain of function of a p53 hot spot mutation in a mouse model of Li-Fraumeni syndrome.

Gene Lang, Tomoo Iwakuma, Young-Ah Suh … (2004)
Individuals with Li-Fraumeni syndrome carry inherited mutations in the p53 tumor suppressor gene and are predisposed to tumor development. To examine the mechanistic nature of these p53 missense mutations, we generated mice harboring a G-to-A substitution at nucleotide 515 of p53 (p53+/515A) corresponding to the p53R175H hot spot mutation in human cancers. Although p53+/515A mice display a similar tumor spectrum and survival curve as p53+/- mice, tumors from p53+/515A mice metastasized with high frequency. Correspondingly, the embryonic fibroblasts from the p53515A/515A mutant mice displayed enhanced cell proliferation, DNA synthesis, and transformation potential. The disruption of p63 and p73 in p53-/- cells increased transformation capacity and reinitiated DNA synthesis to levels observed in p53515A/515A cells. Additionally, p63 and p73 were functionally inactivated in p53515A cells. These results provide in vivo validation for the gain-of-function properties of certain p53 missense mutations and suggest a mechanistic basis for these phenotypes.