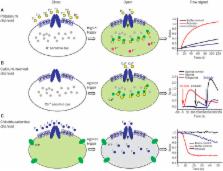 Ion channels are involved in a variety of fundamental physiological processes, and their malfunction causes numerous human diseases. Therefore, ion channels represent a class of attractive drug targets and a class of important off-targets for in vitro pharmacological profiling. In the past decades, the rapid progress in developing functional assays and instrumentation has enabled high throughput screening (HTS) campaigns on an expanding list of channel types. Chronologically, HTS methods for ion channels include the ligand binding assay, flux-based assay, fluorescence-based assay, and automated electrophysiological assay. In this review we summarize the current HTS technologies for different ion channel classes and their applications.

New calcium indicators and buffers with high selectivity against magnesium and protons: design, synthesis, and properties of prototype structures.

Roger Y. Tsien (1980)
A new family of high-affinity buffers and optical indicators for Ca2+ is rationally designed and synthesized. The parent compound is 1,2-bis(o-aminophenoxy)ethane-N,N,N',N'-tetraacetic acid (BAPTA), a relative of the well-known chelator EGTA [ethylene glycol bis(beta-aminoethyl ether)-N,N,N',N'-tetraacetic acid] in which methylene links between oxygen and nitrogen are replaced by benzene rings. BAPTA and its derivatives share the high (greater than 10(5)) selectivity for Ca2+ over Mg2+ of EGTA but are very much less affected by pH changes and are faster at taking up and releasing Ca2+. The affinity of the parent compound for Ca2+ (dissociation constant 1.1 x 10(-7) M in 0.1 M KCl) may be strengthened or weakened by electron-releasing or -withdrawing substituents on the aromatic rings. The Ca2+ and Mg2+ affinities may further be altered by replacing the ether oxygens by heterocyclic nitrogen atoms. The compounds described are fluorescent Ca2+ indicators absorbing in the ultraviolet region; the very large spectral shifts observed on binding Ca2+ fit the prediction that complexation should hinder the conjugation of the nitrogen lone-pair electrons with the aromatic rings. Derivatives with quinoline nuclei are notable for their high sensitivity of fluorescent quantum yield to the binding of Ca2+ but not of Mg2+. Preliminary biological tests have so far revealed little or no binding to membranes or toxic effects following intracellular microinjection.

R. Paredes,  Julie Etzler,  Lora Watts … (2008)
Our understanding of the underlying mechanisms of Ca2+ signaling as well as our appreciation for its ubiquitous role in cellular processes has been rapidly advanced, in large part, due to the development of fluorescent Ca2+ indicators. In this chapter, we discuss some of the most common chemical Ca2+ indicators that are widely used for the investigation of intracellular Ca2+ signaling. Advantages, limitations and relevant procedures will be presented for each dye including their spectral qualities, dissociation constants, chemical forms, loading methods and equipment for optimal imaging. Chemical indicators now available allow for intracellular Ca2+ detection over a very large range ( 50 microM). High affinity indicators can be used to quantify Ca2+ levels in the cytosol while lower affinity indicators can be optimized for measuring Ca2+ in subcellular compartments with higher concentrations. Indicators can be classified into either single wavelength or ratiometric dyes. Both classes require specific lasers, filters, and/or detection methods that are dependent upon their spectral properties and both classes have advantages and limitations. Single wavelength indicators are generally very bright and optimal for Ca2+ detection when more than one fluorophore is being imaged. Ratiometric indicators can be calibrated very precisely and they minimize the most common problems associated with chemical Ca2+ indicators including uneven dye loading, leakage, photobleaching, and changes in cell volume. Recent technical advances that permit in vivo Ca2+ measurements will also be discussed.