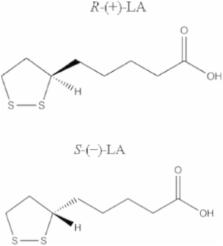 Alpha-lipoic acid is a naturally occurring substance, essential for the function of different enzymes that take part in mitochondria’s oxidative metabolism. It is believed that alpha-lipoic acid or its reduced form, dihydrolipoic acid have many biochemical functions acting as biological antioxidants, as metal chelators, reducers of the oxidized forms of other antioxidant agents such as vitamin C and E, and modulator of the signaling transduction of several pathways. These above-mentioned actions have been shown in experimental studies emphasizing the use of alpha-lipoic acid as a potential therapeutic agent for many chronic diseases with great epidemiological as well economic and social impact such as brain diseases and cognitive dysfunctions like Alzheimer disease, obesity, nonalcoholic fatty liver disease, burning mouth syndrome, cardiovascular disease, hypertension, some types of cancer, glaucoma and osteoporosis. Many conflicting data have been found concerning the clinical use of alpha-lipoic acid in the treatment of diabetes and of diabetes-related chronic complications such as retinopathy, nephropathy, neuropathy, wound healing and diabetic cardiovascular autonomic neuropathy. The most frequent clinical condition in which alpha-lipoic acid has been studied was in the management of diabetic peripheral neuropathy in patients with type 1 as well type 2 diabetes. Considering that oxidative stress, a imbalance between pro and antioxidants with excessive production of reactive oxygen species, is a factor in the development of many diseases and that alpha-lipoic acid, a natural thiol antioxidant, has been shown to have beneficial effects on oxidative stress parameters in various tissues we wrote this article in order to make an up-to-date review of current thinking regarding alpha-lipoic acid and its use as an antioxidant drug therapy for a myriad of diseases that could have potential benefits from its use.

(2008)
The prevalence of diabetes continues to grow, with the number of people in the U.S. with diagnosed diabetes now reaching 17.5 million. The objectives of this study are to quantify the economic burden of diabetes caused by increased health resource use and lost productivity, and to provide a detailed breakdown of the costs attributed to diabetes. This study uses a prevalence-based approach that combines the demographics of the population in 2007 with diabetes prevalence rates and other epidemiological data, health care costs, and economic data into a Cost of Diabetes Model. Health resource use and associated medical costs are analyzed by age, sex, type of medical condition, and health resource category. Data sources include national surveys and claims databases, as well as a proprietary database that contains annual medical claims for 16.3 million people in 2006. The total estimated cost of diabetes in 2007 is $174 billion, including $116 billion in excess medical expenditures and $58 billion in reduced national productivity. Medical costs attributed to diabetes include $27 billion for care to directly treat diabetes, $58 billion to treat the portion of diabetes-related chronic complications that are attributed to diabetes, and $31 billon in excess general medical costs. The largest components of medical expenditures attributed to diabetes are hospital inpatient care (50% of total cost), diabetes medication and supplies (12%), retail prescriptions to treat complications of diabetes (11%), and physician office visits (9%). People with diagnosed diabetes incur average expenditures of $11,744 per year, of which $6,649 is attributed to diabetes. People with diagnosed diabetes, on average, have medical expenditures that are approximately 2.3 times higher than what expenditures would be in the absence of diabetes. For the cost categories analyzed, approximately $1 in $5 health care dollars in the U.S. is spent caring for someone with diagnosed diabetes, while approximately $1 in $10 health care dollars is attributed to diabetes. Indirect costs include increased absenteeism ($2.6 billion) and reduced productivity while at work ($20.0 billion) for the employed population, reduced productivity for those not in the labor force ($0.8 billion), unemployment from disease-related disability ($7.9 billion), and lost productive capacity due to early mortality ($26.9 billion). The actual national burden of diabetes is likely to exceed the $174 billion estimate because it omits the social cost of intangibles such as pain and suffering, care provided by nonpaid caregivers, excess medical costs associated with undiagnosed diabetes, and diabetes-attributed costs for health care expenditures categories omitted from this study. Omitted from this analysis are expenditure categories such as health care system administrative costs, over-the-counter medications, clinician training programs, and research and infrastructure development. The burden of diabetes is imposed on all sectors of society-higher insurance premiums paid by employees and employers, reduced earnings through productivity loss, and reduced overall quality of life for people with diabetes and their families and friends.

Diabetes and cardiovascular disease: a statement for healthcare professionals from the American Heart Association.